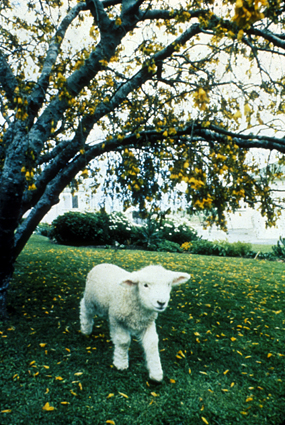 Figuring out which lambs are the offspring of which sheep can be guesswork for sheep producers. A new, low-cost DNA test to verify sheep parentage could soon help breeders worldwide to record accurate pedigrees and maximise the genetic potential of their flock.

A team of Australian and international researchers has identified an ideal set of genetic markers that enable highly accurate parentage testing across all breeds of sheep.

CSIRO project leader Dr James Kijas said it is important for producers to know the pedigrees of their animals.

“This information helps them select the best rams for mating to make sure the best genes are passed on to the next generation,” Dr Kijas said.

“We believe this test will help producers in the way they manage their animals to make full use of their genetic potential, while saving money on infrastructure and labour.”

Funded by Meat & Livestock Australia, the test is being developed through the Cooperative Research Centre for Sheep Industry Innovation (Sheep CRC), Sheep Genetics – a national genetic information and evaluation service, and CSIRO.

Presenting the research at an international conference in Cairns today, Dr Kijas is proposing to the International Society of Animal Genetics that the genetic markers become the global standard for accredited DNA-based parentage testing in sheep.

Traditionally, stud breeders wanting to know the paternity of lambs use the practice of single-sire mating where only one ram is allowed access to a group of fenced-in ewes.

To determine maternity, they can choose to ‘mother up’ lambs to ewes soon after birth based on their proximity in the paddock. However, ‘mismothering’ is a common and often undetected problem that DNA testing can solve.

With DNA-based parentage testing, producers will get close to 100 per cent accurate assignment of both paternity and maternity without the need for resource intensive practices such as single-sire mating and mothering up.

Dr Kijas said DNA testing has not been widely adopted by the sheep industry due to the cost of currently available technologies.

“A major advantage of the DNA markers we have identified is that they work through a technology that’s cheap to deliver. Our objective is a test that costs less than $20 per animal while providing much higher accuracy than any other approach,” Dr Kijas said.

“This is still some way off, but what we have right now is a set of robustly tested DNA markers that will work efficiently not only in common Australian flocks, but in any sheep breed. The wide applicability of the DNA markers should keep the cost of using them low.”

Large-scale trials of the logistics of industry-wide testing will take place over coming months through the Sheep CRC, which will be leading work to commercialise the test.