In late June, the CES Biodiversity Group based in Townsville, packed up their traps, swags, quad-bikes and pushbikes and headed to the NT to participate in the Royal Geographical Society of Queensland’s (RGSQ) 2012 scientific study.

The purpose of these RGSQ studies is to get researchers from a wide range of disciplines together to gather as much data about a (remote) area as possible. RGSQ look after the logistics – the researchers look after their area of expertise. The data collected will add to AWC’s understanding of biodiversity on Pungalina-Seven Emu and help contribute to the conservation and management of the property. 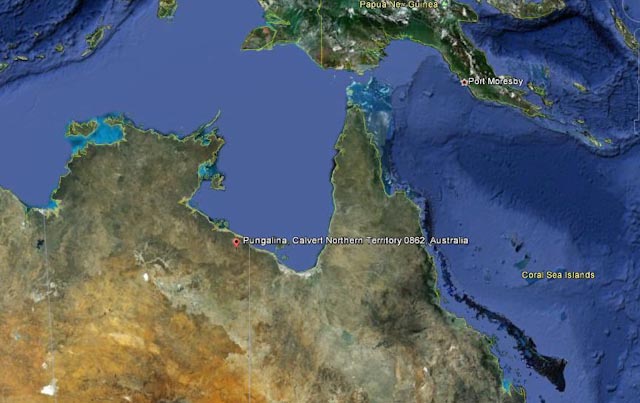 Pungalina-Seven Emu is located on the coast in the Gulf of Carpentaria (see above) and has an incredibly diverse range of habitats including coastal mangroves and salt flats, dune rainforests, paperbark swamps, tall eucalypt woodlands as well as low spinifex covered sandstone escarpments.

Despite the tropical landscape, it was cold (down to 4oC on some nights!) which reduced animal activity to some extent. Nevertheless, the team found at least 147 vertebrate species, including the very restricted, poorly known and vulnerable Carpentarian Pseudantechinus (Pseudantechinus mimulus), the vulnerable Ghost Bat (Australia’s largest predatory bat), and one, possibly two, new species of lizard.

They managed to keep their distance from some particularly large “lizards” which inhabit the waters of the Gulf!

Safety observation – Eric Vanderduys (centre) demonstrates to Anders Zimny (left) how Justin Perry (not in photo) was eaten by a crocodile. Gen Perkins (right) is just keen to get away.
Photo: Justin Perry.

A striped skink from the genus Ctenotus. This may be a new species.
Photo: Eric Vanderduys.

Cinder cones on the flank of Mauna Kea.

Examining part of a haul of 12 goannas of two species caught in under an hour.
Photo: Anders Zimny.

Previous post:
Safety Incentive Awards at the shipyard!
Coming up next:
Who’s ya daddy?