Isabel 'Joy' Bear passed away on 8 April 2021. We celebrate her contributions to our organisation and science, including describing petrichor. 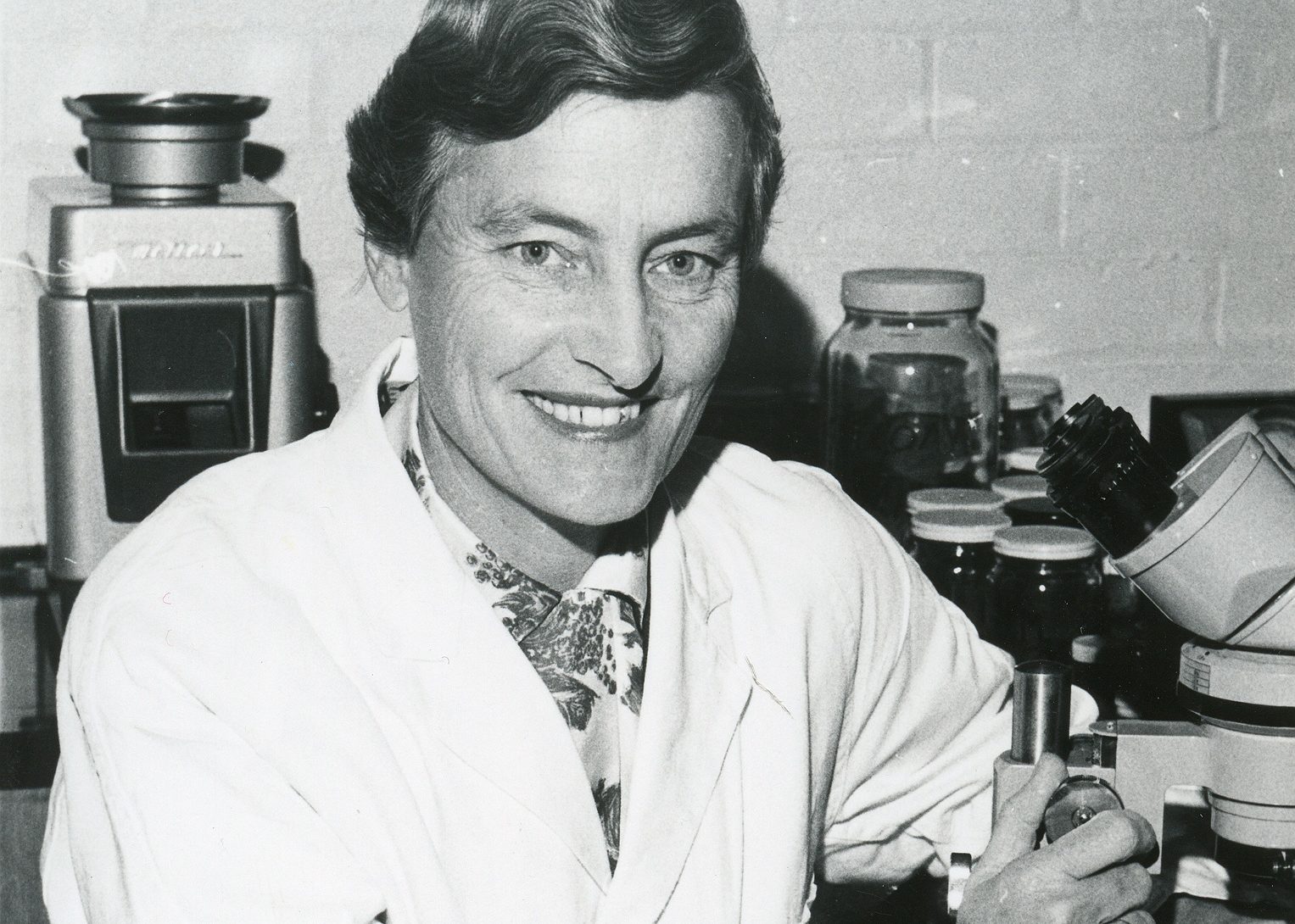 Isabel ‘Joy’ Bear passed away on 8 April 2021. We go through her many achievements with our organisation, including describing and identifying petrichor.

You’ve probably heard the word ‘petrichor’. Possibly while listening to Paul Kelly or The 1975. Or watching the Dr Who episode, ‘The Doctor’s Wife’. Or maybe reading the article: The smell of rain: how our scientists invented a new word.

Did you know Isabel ‘Joy’ Bear was one of the two CSIRO scientists to invent the word? Sadly, Joy passed away on 8 April 2021. She was a pioneer, trailblazer and mentor, now leaving a lasting legacy. Even after retiring, Joy continued walking the halls of our Clayton offices, chatting with colleagues and mentoring up-and-coming young scientists.

We look back on Joy’s amazing life in the world of science. Despite her struggle – and ultimate triumph – over gender bias in her early career, Joy worked hard to become a scientist. This paved the way for many young women to follow in her footsteps.

A life of discoveries and firsts

Joy’s love of science began in year seven. It stemmed from one of her high school teachers who occasionally gave impromptu lectures on the stars and planets. By the end of high school, she had developed a strong ambition to become a research scientist.

In 1944, at age 17, Joy started her career with us. She was a junior Laboratory Assistant with the Minerals Utilisation Section of the Division of Industrial Chemistry of CSIR – the forerunner of CSIRO.

It was during a time when the Second World War created employment opportunities for women in traditionally male-dominated workplaces. However, women were required to resign if they married and conditioned to believe they should only fill junior positions.

Early on, fellow scientists advised Joy that scientists delivered their most creative and productive work before they reached the age of 40. So, if you hadn’t been reclassified by then, you had little hope of making the grade.

Despite this advice, Joy persevered with her career. In the 1950s, Joy collaborated with Dr Richard Grenfell Thomas to study the smell of rain. This led to Joy’s most recognised contribution to science, identifying its cause and giving it a name: petrichor.

The science of petrichor

The two scientists observed the characteristics of the Argillaceous odour, a smell generated by the moisture on dry clay. They realised that clays weren’t the only materials to exhibit the odour. It was actually most silicate minerals and rocks!

According to Richard and Joy’s article, Nature of Argillaceous Odour: “The material in which silica or various metallic silicates predominated were outstanding in their capacity to yield the odour.” Essentially this means if a material had a lot of silicates, it could create this smell.  Additionally, freshly ignited materials rich in iron oxide, with or without silica, gave off this peculiar smell.

In Howard Poynton’s article, he wrote the smell of rain had already been described in Kannauj, India, by a small perfumery. It had captured and absorbed the scent in sandalwood oil. As a result, they called it ‘matti ka attari’, which translates to ‘earth perfume’.

Joy and Richard identified and described its origin. They discovered the smell came from a yellowish oil created by steam exuding from rocks exposed to warm, dry conditions in the open air. Additionally, they found the odour was particularly prevalent in arid regions. It was widely recognised and associated with the first rains after a period of drought. 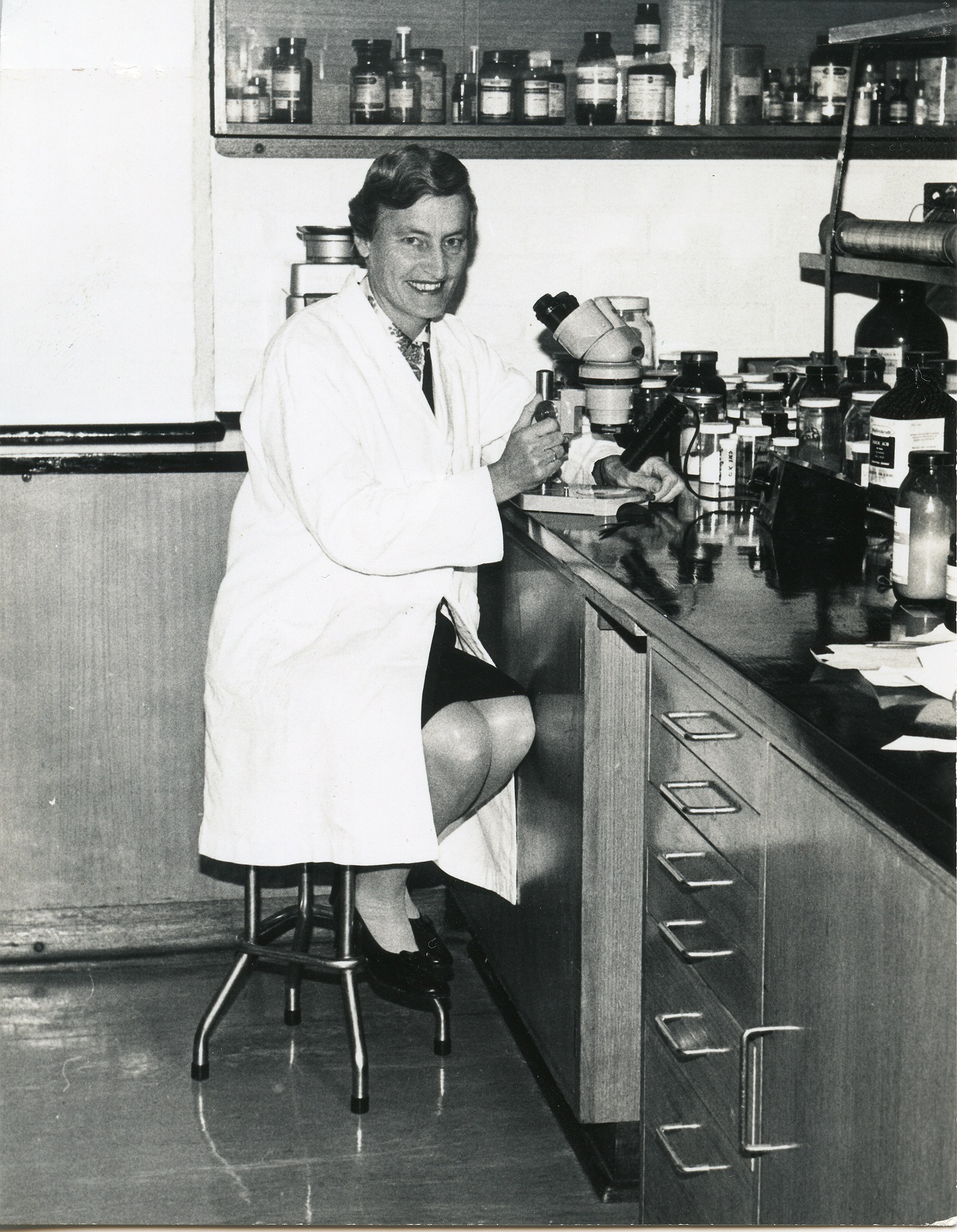 Joy Bear was the first and only woman to reach the research ranks of the Division of Mineral Chemistry.

Joy also discovered a number of previously unknown metastable zirconium sulfate hydrates: two pentahydrates (five water molecules) and a heptahydrate (seven water molecules) in the early 1960s. In collaboration with Dr Gus Mumme, an expert crystallographer, they determined the crystal structures of seven of the compounds. This enabled Joy to elucidate the mechanism by which both these and metastable compounds are formed.

Despite Joy being 40, without a PhD and a woman, this work led to her being reclassified first as a Research Officer. After that, she became a Research Scientist in 1967. She was the first and only woman to reach the research ranks of the Division of Mineral Chemistry.

Joy was a true inspiration, mentor and advocate for women in science. She also led the way for her fellow female colleagues to follow in her footsteps.

Malisja de Vries, one of our scientists, said she had the honour and privilege to work with Joy for many years.

“She was an inspiration to women in science, to anyone who fought for fairness. And, of course, she had a wonderful sense of humour with a 70-year dedication to science and a productive career. Despite the struggles she endured as a woman in the day, she still had time to support young scientists,” Malisja said.

“Joy’s enthusiasm and passion for science and to support the next generation of researchers was brilliant and highly valued,” Marcus Zipper, Director of our Manufacturing Business Unit, said.

And Joy’s advice wasn’t solely for people at the start of their STEM career. Scientists at different stages of their work appreciated her advice.

“Joy led the charge for the rest of us,” Sherry Mayo, one of our scientists, said.

We’re addressing gender equity through our work with the Science in Australia Gender Equity (SAGE) pilot, the Male Champions of Change (MCC) initiative, and as a Champion of the Women in STEM Decadal Science Plan.

It’s thanks to role models like Joy who share their stories and knowledge with the next generation of women in STEM. Her determination and hard work helped her reach the ranks of scientist and achieve great success in her career. She is an inspiration to all.

Read more about our Minerals research