Tropical ocean bacteria help pump CO2 out of the atmosphere

Tropical ocean bacteria help pump CO2 out of the atmosphere

What will our climate look like in 200 years? The answer to this question depends on our emissions of greenhouse gases, but also on all the complex and interlinked physical and biological processes that make up the climate system. One of these processes has a surprising source: tiny bacteria living in tropical oceans. Our latest research shows how important some special bacteria, called nitrogen fixers, are to the global process of pulling carbon dioxide (CO₂) out of the atmosphere.

The story begins with another type of single-celled microbe known as phytoplankton. Like plants, phytoplankton create their own food using sunlight and CO₂, absorbing much of the CO₂ as they grow. When they die, they sink to the deep ocean, taking the CO₂ with them.

The constant removal of CO₂ from the air to the surface of the water and then to the deep ocean is termed the “biological pump”. The stronger the collective biological pump action of phytoplankton, the less CO₂ in the atmosphere and the cooler the planet. 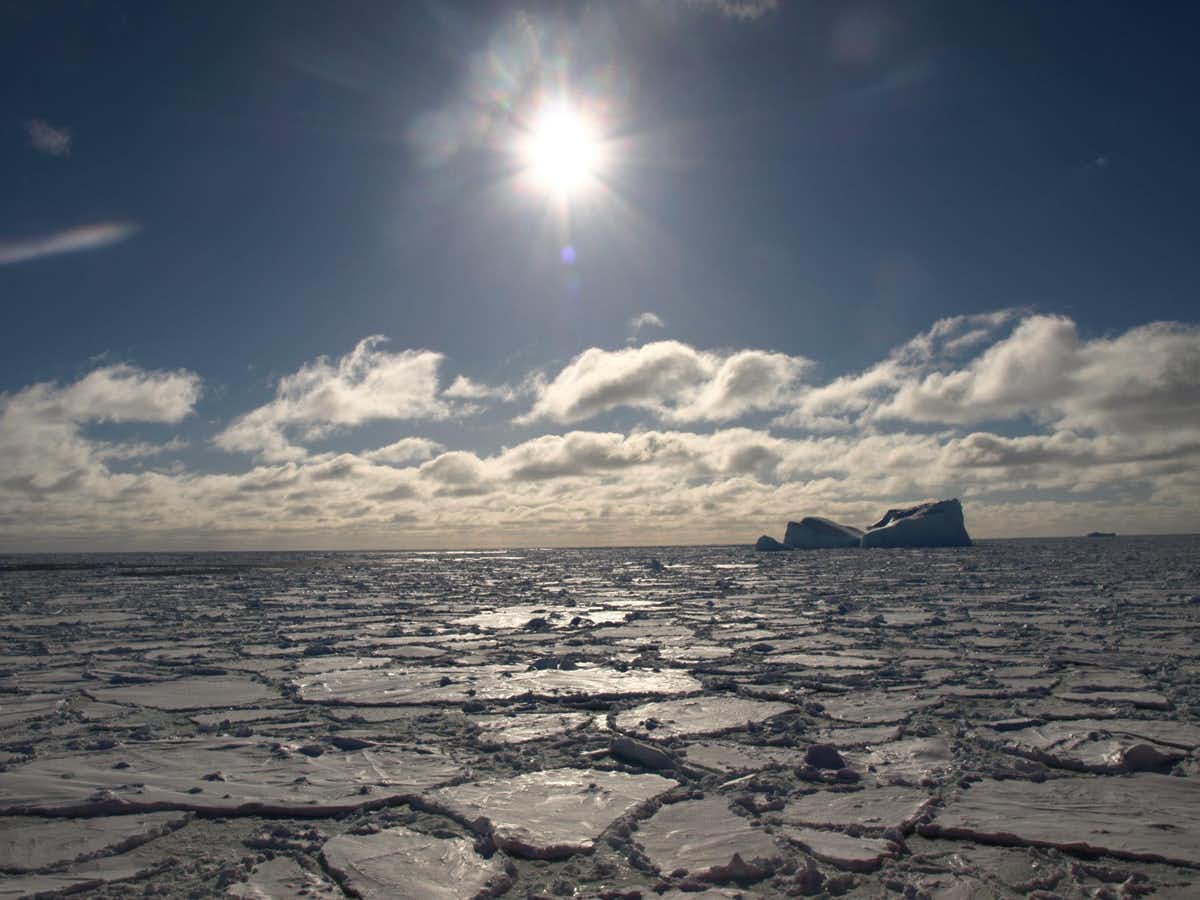 The cold ocean of an Ice Age drew carbon dioxide out of the atmosphere. Credit: Pearse J. Buchanan

The cold climate of the Earth’s ice ages was due in part to a more vigorous biological pumping. At these times, global temperatures were 5°C lower than today. Glaciers covered the Siberian, European and North American landmasses, and sea level dropped more than 100 metres. These extreme conditions were brought about by a decline in atmospheric CO₂ of about 100 parts per million.

We know that the ocean absorbed the CO₂, and that the increase in drawdown came partly from a change in ocean circulation. The ability of the ocean to hold CO₂ depends on how it circulates, with some modes of circulation enabling more storage than others. But this only explains between a third and two-thirds of the CO₂ drawdown. The rest was due to a strengthening of the biological pump.

For years, scientists have tried to explain this strengthening by looking at what happened to cold-water phytoplankton living in places such as the Southern Ocean. This ocean tends to be starved of iron, a nutrient essential for photosynthesis. The climate during the ice ages contained a lot of iron-rich dust, so there is strong evidence that this stimulated the growth of cold-water phytoplankton.

But recent climate modelling has shown that fertilisation of the Southern Ocean with iron didn’t lead to enough CO₂ absorption to explain the ice ages. So, along with our colleagues Steven Phipps and Nathan Bindoff, we investigated the role of phytoplankton that live in the warm, tropical ocean.

Tropical phytoplankton tend to be starved of nitrogen, not iron. But these waters also contain a special group of bacteria that can “fix” nitrogen, turning nitrogen gas into forms that can be used by living things. The presence of nitrogen-fixing bacteria therefore fertilises warm-water phytoplankton, enabling their growth and strengthening the biological pump. 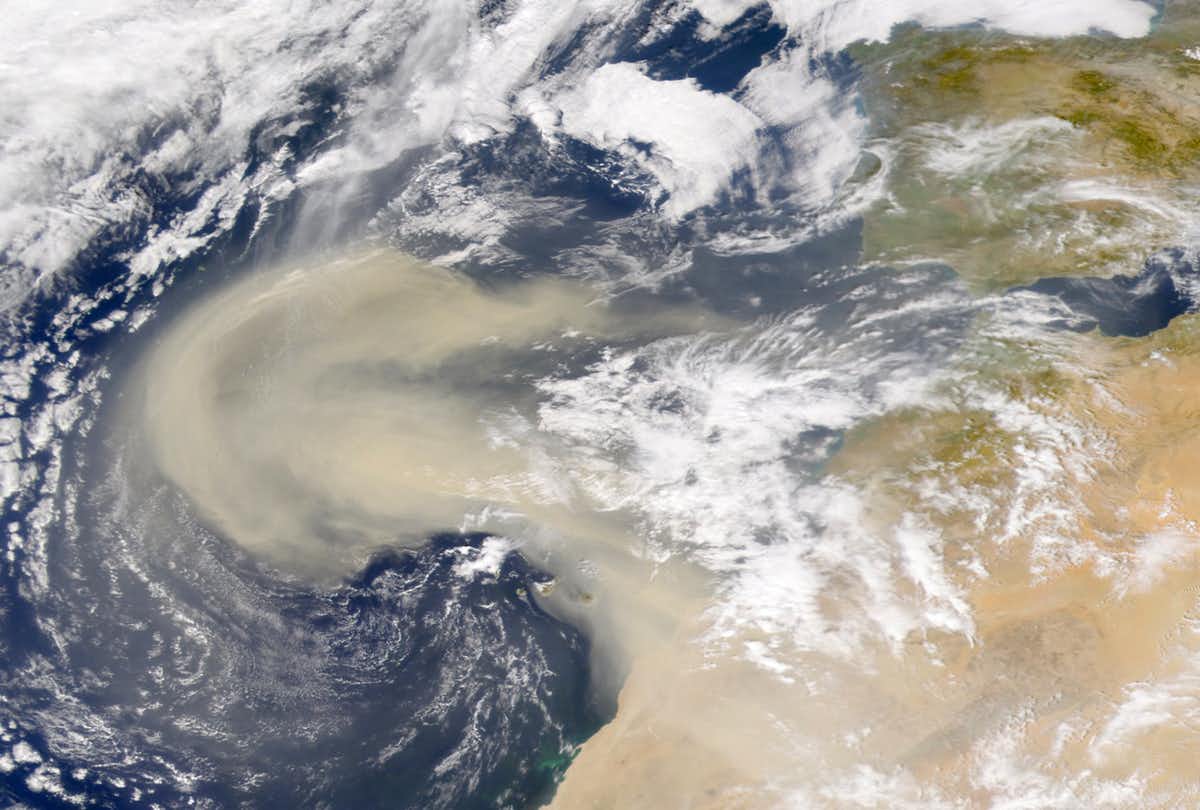 A dust storm blows over the Atlantic Ocean. Credit: NASA

But much like cold-water phytoplankton, nitrogen fixers also need iron. In fact, nitrogen fixation is an iron-hungry process, and colonies made up of millions of nitrogen fixers work together to capture and extract the iron from dust particles. Realising the potential of nitrogen fixers, we added them to an ocean climate model and found that they played a pivotal role in strengthening the biological pump when the ocean is fertilised with iron, as during the ice ages.

Given our current need to reduce the amount of CO₂ in the atmosphere, it may seem tempting to try fertilising the ocean with iron in order strengthen the biological pump again. Realistically, a lot more research would need to be done to determine the potential and the risks of this action.

But even if we don’t try to geoengineer the planet, changes in the biological pump may be coming our way. There is some evidence that nitrogen fixation has been increasing since the industrial revolution, a sign of a strengthening biological pump.

One thing is clear, the biological pump will help determine the long-term trajectory of Earth’s climate. If (and hopefully when) we stop our emissions, the biological pump will come to the forefront as a major control of atmospheric CO₂. How it responds will either amplify or ameliorate our greenhouse problem, and so it is imperative that we continue to build our understanding.