Travel to Mars with Perseverance, Ingenuity and Hope

Travel to Mars with Perseverance, Ingenuity and Hope

It’s time to travel to Mars again! The journey is not easy. It takes perseverance, ingenuity and a lot of hope. 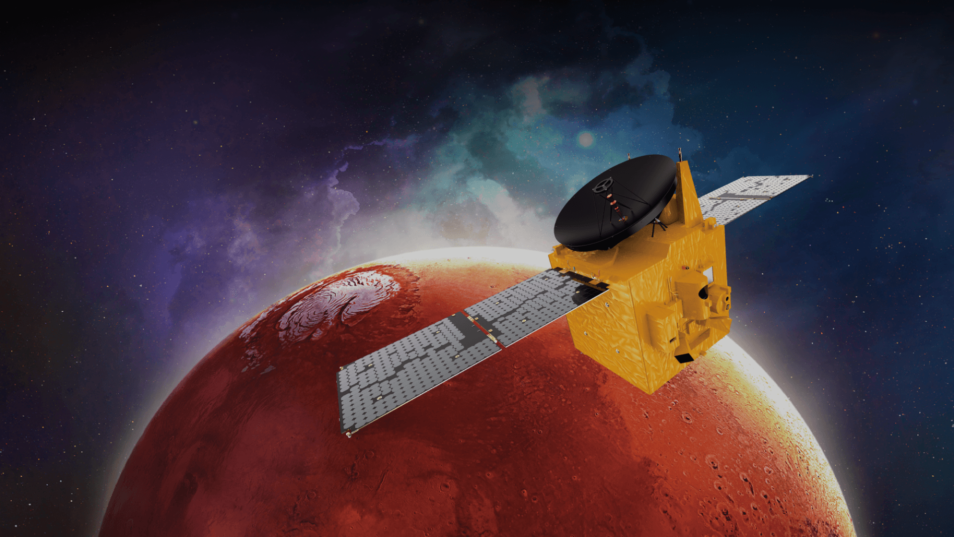 It’s time to travel to Mars again! Every 26 months, the orbits of Earth and Mars line up in such a way that spacecraft can take the most energy efficient path between these two worlds.

Miss that window and you must wait another two years before you can try again.

So, it takes mission engineers, scientists and planners a lot of perseverance, ingenuity and hope to achieve that tight goal.

Appropriately, these three human traits are also the names of three robots heading for the Red Planet. All three missions will be supported by the antennas at the Canberra Deep Space Communication Complex, which we manage for NASA. 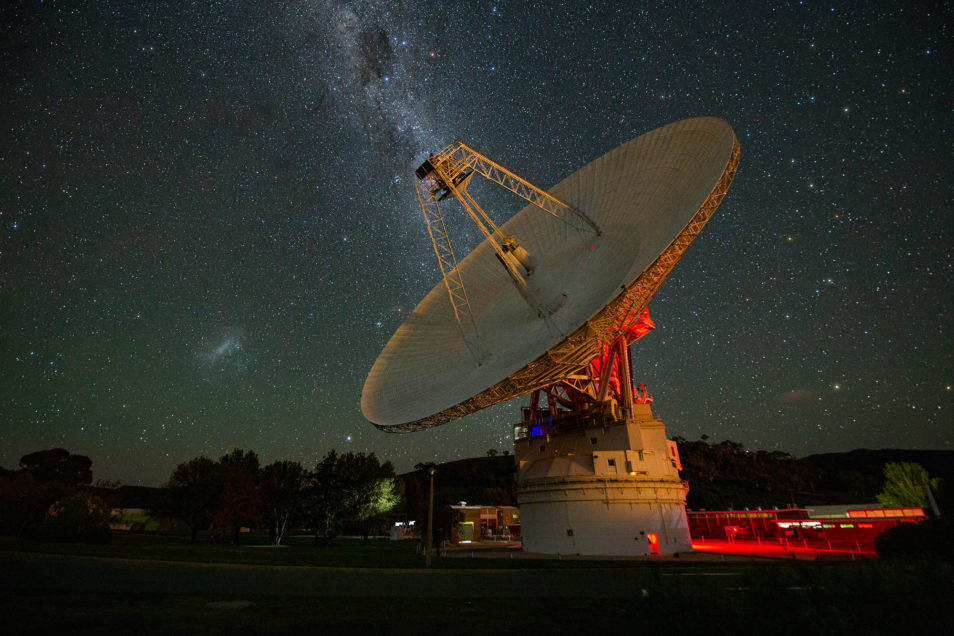 The Canberra Deep Space Communication Complex, which we manage for NASA, supports over 35 spacecraft from dozens of nations exploring the Solar System and beyond. Credit: CSIRO/CDSCC/A. Cherney

NASA’s latest ambitious mission is the Perseverance rover. It’s due to launch on 30 July. Perseverance is a cousin to the Curiosity rover which has been exploring Mars since 2012. It will return samples of Martian rock and soil to Earth for examination in the hunt for clues to ancient life.

The planned landing site is Jezero Crater. It features a winding river channel that has deposited sediments fanning into a wide, but now dry, river delta system.

Mission scientists believe this location offers some of the best opportunities to look for signs of past life. So, it’s where the rover will collect and store materials for later return to Earth.

One of the instruments on the rover’s robot arm is PIXL, the Planetary Instrument for X-ray Lithochemistry. PIXL is an x-ray spectrometer and camera. It is built to identify the chemical signature and features of rocks and soil as small as a grain of salt.

PIXL’s lead scientist is geologist and astrobiologist Abigail Allwood. Abigail now works at the Jet Propulsion Laboratory (JPL) in Pasadena, California and she is the first woman and Australian to be a Principal Investigator on a NASA mission to Mars. 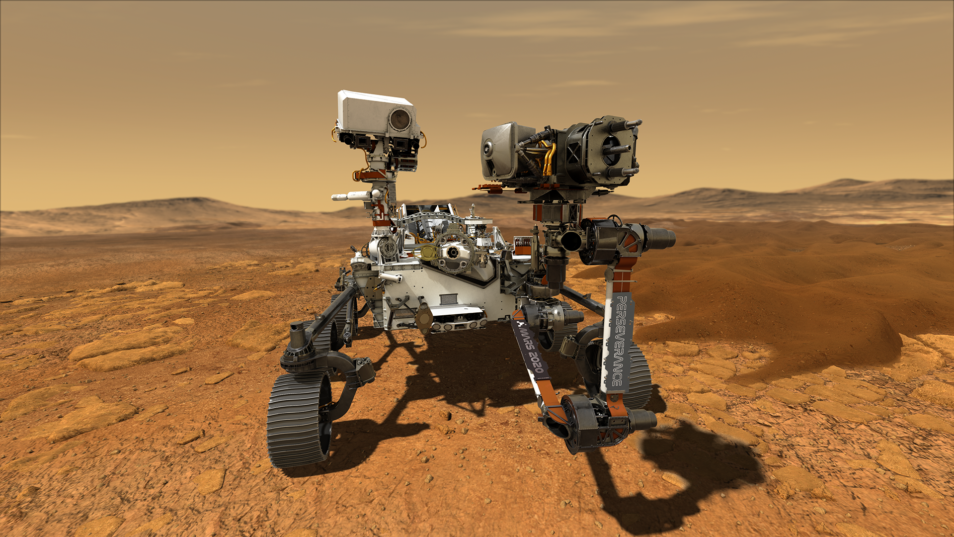 Illustration of NASA’s Perseverance rover operating on the surface of Mars.
Credit: NASA/JPL-Caltech

Perseverance won’t travel to Mars alone. Tucked beneath the belly of the rover, to be deployed soon after landing, is the first helicopter designed to operate on another planet.

Ingenuity is a 1.8 kg vehicle with twin-blade rotors. It will fly through the thin Martian atmosphere and investigate the terrain near the rover. Ingenuity’s photos will be relayed back to Earth through a wi-fi link with the rover. The images will help identify areas beyond the rover’s ground view that could be of interest for further investigation. 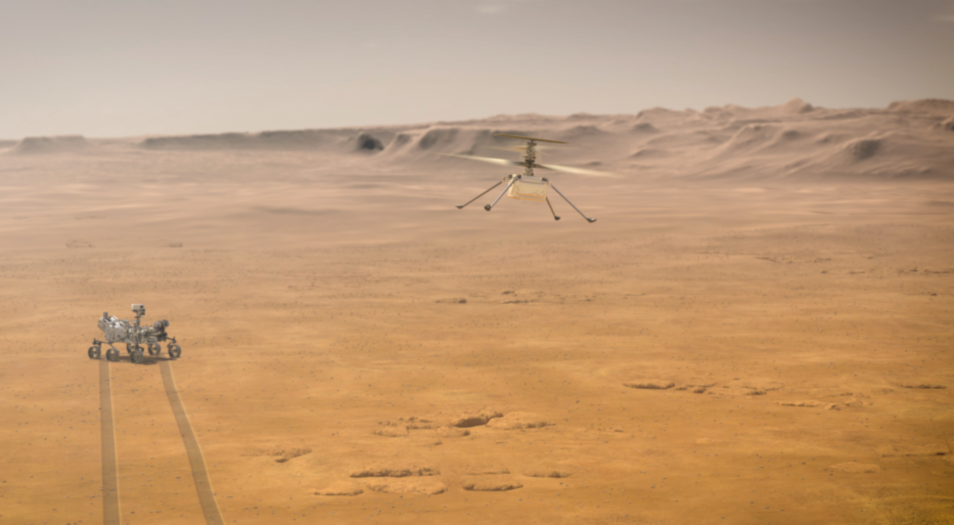 When NASA’s Ingenuity Mars Helicopter attempts its first test flight on the Red Planet, the agency’s Mars 2020 Perseverance rover will be close by, as seen in this artist’s concept. Credit: NASA/JPL-Caltech

The dreams and aspirations of all explorers are, in one way or another, built on hope.

Nations like the United States have led the way in successful Mars’ missions over the last four decades. Now, new players like the United Arab Emirates (UAE) have made their own bold entry into the exploration of Mars with a vehicle called ‘Al Amal’ or ‘Hope’.

A Japanese rocket launched Hope on 20 July 2020. The UAE’s first interplanetary mission will enter orbit at Mars in February 2021. This is around the same time Perseverance and Ingenuity are due to arrive.

Hope will examine the Martian atmosphere, detailing the climate and daily weather patterns. If successful it will join eight other missions that will be active in orbit or on the surface of Mars.

None of these missions just happen. And Mars has proven to be a hard destination to reach. Over fifty percent of missions have failed.

To make it to the Red Planet you must beat seemingly impossible odds. But with perseverance, ingenuity and hope you can overcome seemingly insurmountable obstacles and reach for the stars.

What is the Canberra Deep Space Communication Complex? Find out more.