Our researchers have discovered and named two new species of micro-jellyfish found in Australian waters. 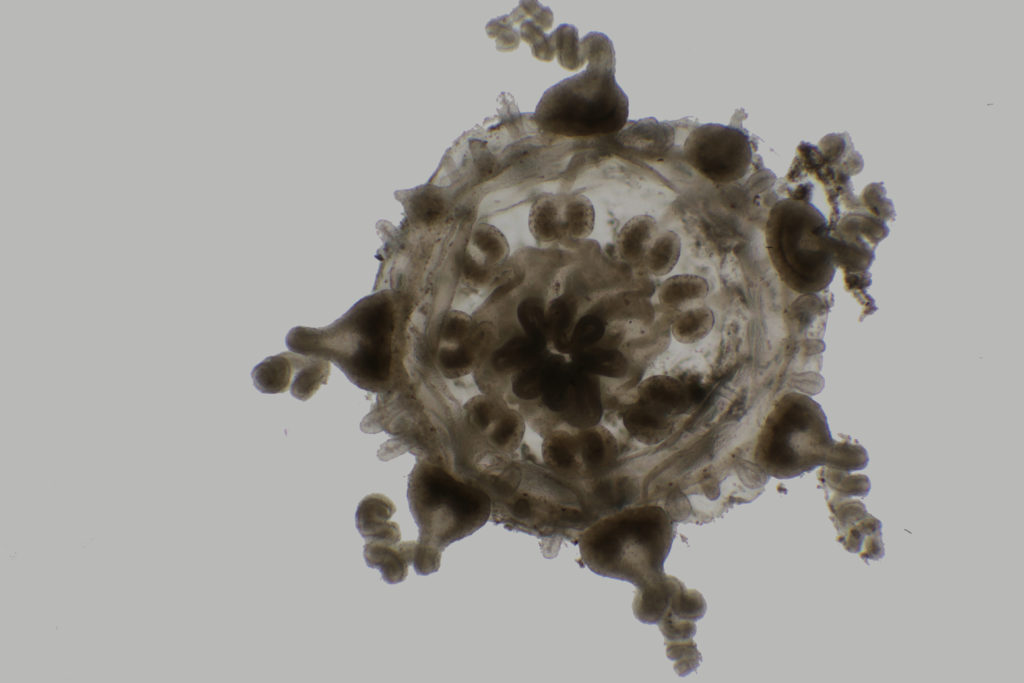 The underside of the newly-discovered M. antrichardsoni jellyfish

What image comes to your mind when you think about jellyfish? Is it the beautiful and almost flat blue and white jelly that looks like a disk and is surrounded by delicate tentacles. Or is it the spotted colourful jelly with long tentacles and hanging structures that look like silky scarves flowing in the waters? These two jellyfish are the moon jelly Aurelia sp. and Pelagia sp. respectively. They are the two types of jellies more often presented to us in aquariums around the world.

You’ve probably seen jellyfish IRL too, even jumped over one on a beach walk. That gelatinous and translucent disk-shape thing on the sand looking totally inert — probably a jelly — a living creature washed up in the tide!

Our team of researchers have been studying Australia’s community of planktonic organisms as part of a long-term scientific project that allow us to collect, preserve and identify all these tiny creatures and even describe new species that we were not previously known to science.

Our researchers recently discovered and described two new species of tiny jellyfish which sizes are close to 2 mm of diameter as full grown adults. The smallest of the new jellies is called Paralovenia yongalensis which was given this name because it was found at Yongala, an area south-east of Townsville where people lost their lives on board the SS Yongala in 1911. This wreck area is recognised these days as one of the best diving spots in the world and is one of the Integrated Marine Observing System National Reference Stations (NRS) where we collect samples of plankton and water to get biological, physical and chemical information as part of our ongoing research. 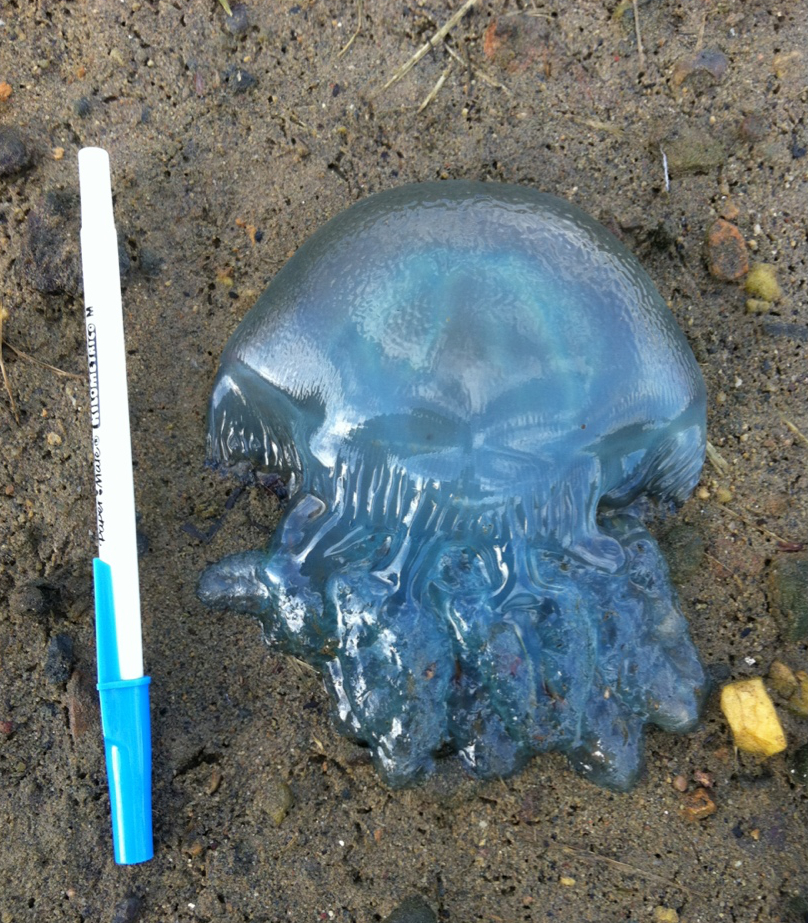 A Catostylus mosaicus found on the ground at Manly in Brisbane.

Melicertissa antricharsoni is the second newly-described species and constitutes the smallest species within their species (about 2 mm of diameter). This species has been found only in Moreton Bay and very recently at North Stradbroke Island NRS. Melicertissa antricharsoni was named in honour of Professor Anthony Richardson, one of our current researchers and a passionate academic who has supported the study of plankton in Australian waters and actively promoted the importance of research in plankton worldwide.

These two discoveries contribute to our knowledge of Australian biodiversity showing us that there must be many more species of organisms that have not yet been discovered in Australian waters, particularly in a megadiverse area such as the Great Barrier Reef and surroundings.

We need to do more research to understand the role of micro-jellyfish in the ecosystem or even their potential use for human purposes. For instance, some fluorescent components we use it in molecular sciences were found and isolated first from jellyfish. Turritopsis dohrnii is a micro-jellyfish (~2 mm) that has been proven to be immortal and is currently being studied to understand cells ageing or cell regeneration. And finally, we need to explore the use of some planktonic species as a bio-indicator of environmental changes caused by human intervention or natural events. 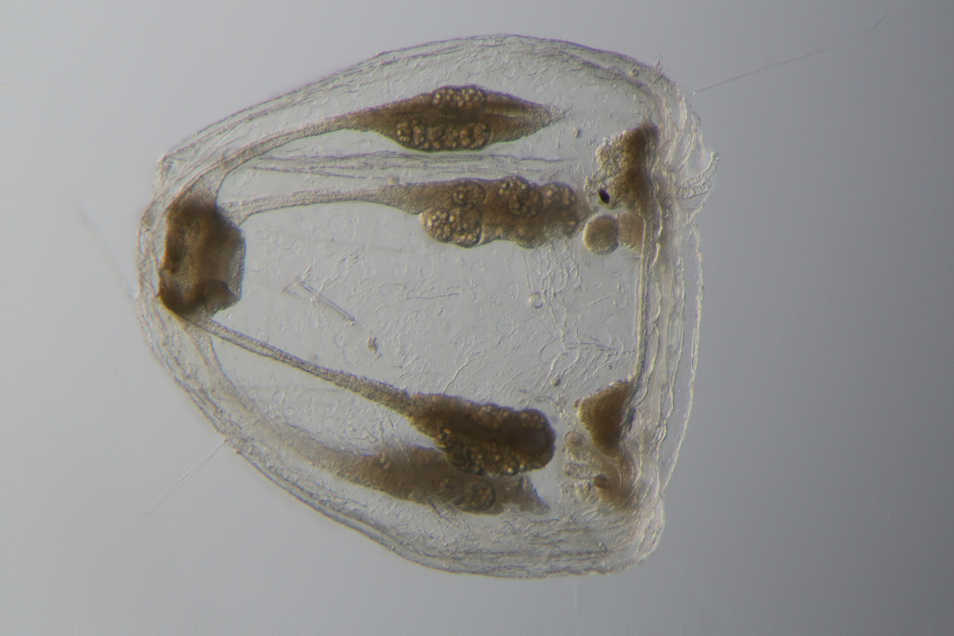 Side view of the newly-discovered P. yongalensis jellyfish

In some places around Australia (like in Moreton Bay) and particularly on windy days you might be able to spot a few to hundreds of white-blue hemispheric jellies drifting with the currents or stranded on the beach. This is a common jellyfish called Catostylus also known as blue blubbers. All those examples are the kind of jellyfish that we are able to notice with the naked eye.

Some species of jellyfish are able to grow quite big like the giant ‘lion’s mane jellyfish’ (Cyanea capillata) that might be as wide as a full grown person and can weigh more than 225 kilograms. Then there are several species of jellyfish that don’t grow bigger than just a few centimetres…or even millimetres. 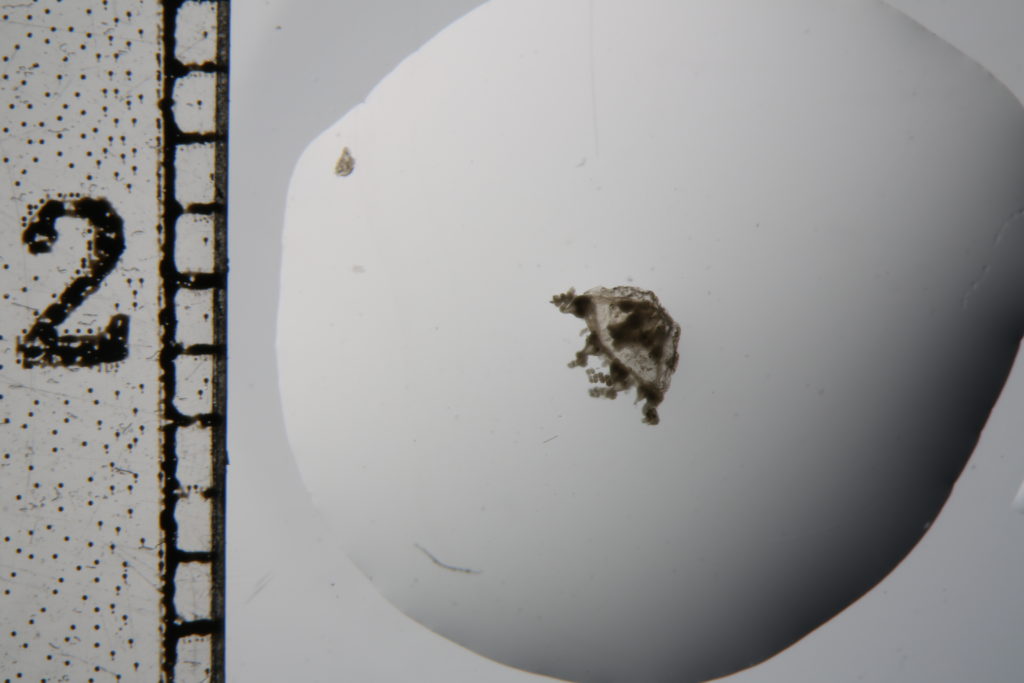 An M. antrichardsoni in a drop of water from Moreton Bay, Queensland; each division of the scale bar corresponds to 1 mm.

In collaboration with the Integrated Marine Observing System we’re working to reveal the secret lives of those species of zooplankton, including jellyfish that are hiding in plain sight unnoticeable to us because of their minuscule size.

Don’t get jelly, get curious

Dive into more of our jellyfish and plankton research