Three land-loving animals from our Magical World of Oz

Three land-loving animals from our Magical World of Oz

Meet the creatures from episode 2 of the ABC's new nature doco series, Magical Land of Oz. And find out how you can help us protect our native fauna. 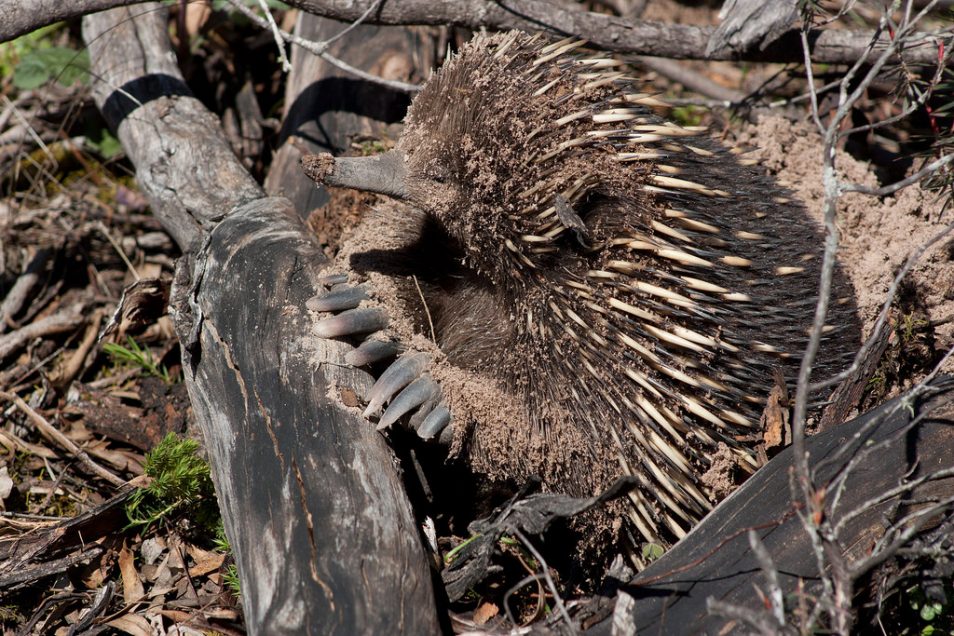 Echidnas star on episode two of the Magical Land of Oz, the ABC’s new nature doco.

“How do Australian animals endure the country’s frozen peaks? How do they thrive on its harsh savannahs, and compete in its tropical rainforests? Travelling into their worlds, we begin to understand how truly unique life is in the magical land of Oz.”

Did you see the second episode of the ABC’s new nature documentary, the Magical Land of Oz? Tune in this Sunday at 7:40pm for the final episode. Episode 3 of the Magical Land of Oz will feature how humans have shaped Australia – for better or worse. And remember: you can still send us your photos and help protect our magical land!

Allow us to introduce you to three of the critters from Episode Two.

There’s a lot to love about the Short-beaked Echidna. Their babies are called puggles. They make ‘snuffling’ noises when they hunt for food. They’re a mammal, but they eggs. And … they can swim!

Echidnas are also called spiny ant-eaters. They use their sticky, saliva-covered tongue (up to 17 cm long!) to slurp up ants and other insects. The good news is, ants are found all across Australia. And so the echidna is one of our most widespread native mammals. They can live in the desert, and in the highest, most snowy parts of our country.

Magical Land of Oz starts with a stunning shot of an echidna waddling across the snow, it’s shovel-like claws working like snow shoes. In the Snowy Mountains, echidnas hibernate on and off over the coldest months, emerging at the tail end of winter. How does it survive? Echidnas are one of the most energy efficient mammals on the planet — it’s body temperature can drop below 5 degrees! It can survive long periods in the bitter cold.

Puggle-power to the people! We want to learn more about echidnas: where they are, what they are doing, if they are healthy … all so we can work towards their conservation. How can you help? By taking photos and collecting scats (poo) — you can be a citizen scientists for echidnas. Just download the Echidna CSI App. 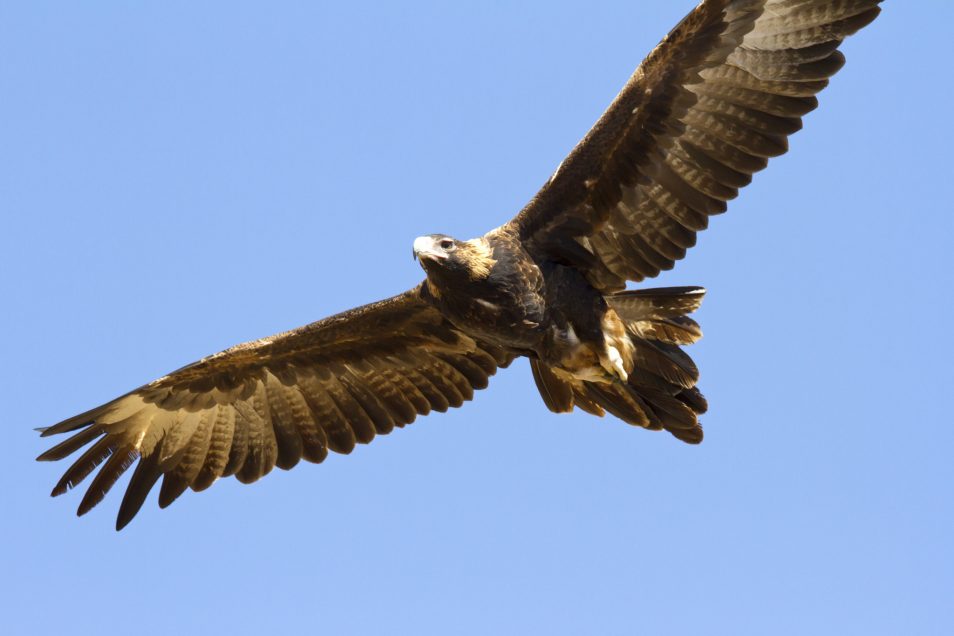 Wedgetail eagles can soar to 2000m! They’re one of the species featured on the Magical Land of Oz. Image: Jim Bendon.

Affectionately known as wedgies, wedgetailed eagles are Australia’s biggest bird of prey. With a wingspan of two metres, they’re also one of the world’s largest eagles. They are clumsy taking off, heaving their weight into the air. But, once they’re on the wing, they soar with ease. In fact, they can reach altitudes of 2000m!

Wedgies are monogomous — they mate for life. Breeding pairs make impressive nests of sticks (lined with leaves), that can measure 2m across, 3m deep and weigh more than 400kg! The nests are so large that other, smaller birds can nest within them (and benefit from the eagle’s protection!). Where there are no trees, nests are created on shrubs, telegraph poles, cliff faces and even on the ground!

For years the wedgetailed eagle was shot in great numbers. In the mid-1900s there was a bounty on its head, and up to 30,000 eagles were killed in a single year. Eagles are now protected. 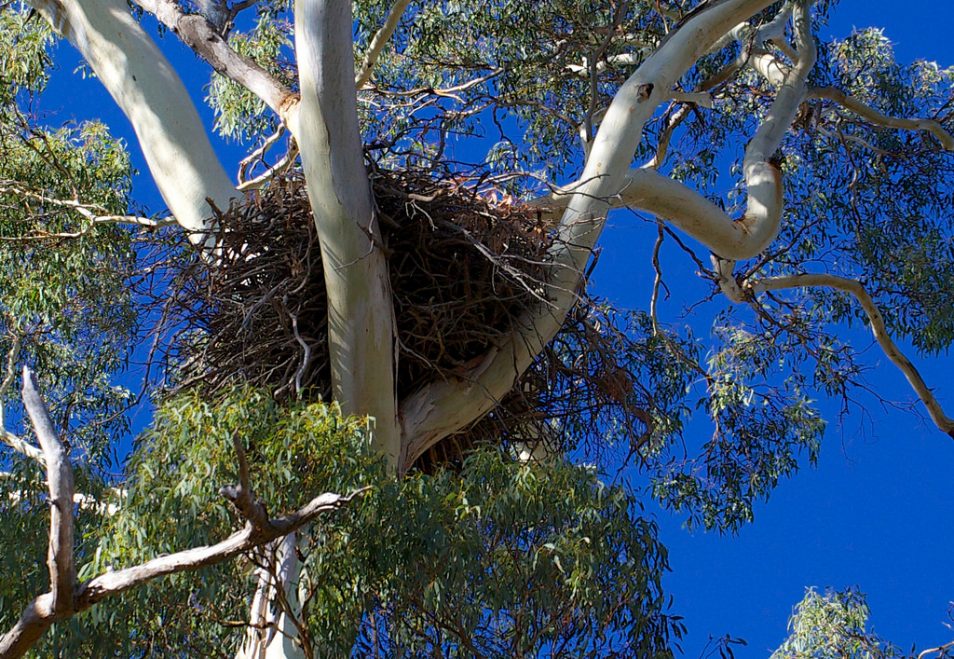 A wedgetail eagle’s nest is so large that other birds, like finches, nest in the underside! Image: Julie Burghe

Eagles are one of the many raptors found in the brand new guide: Australian Birds of Prey in Flight. The book features the work of one of our Senior Research Scientists, Mat Gilfedder. The book contains individual species profiles with extremely detailed images of each bird in six different angles and poses, all meticulously photographed by many talented photographers. This book is a photo guide for the eagles, hawks, kites and falcons flying high above us. It’s aimed at helping budding bird watchers (and experienced ones as well) identify birds on the wing. Find out more about this book made with help from citizen scientists. 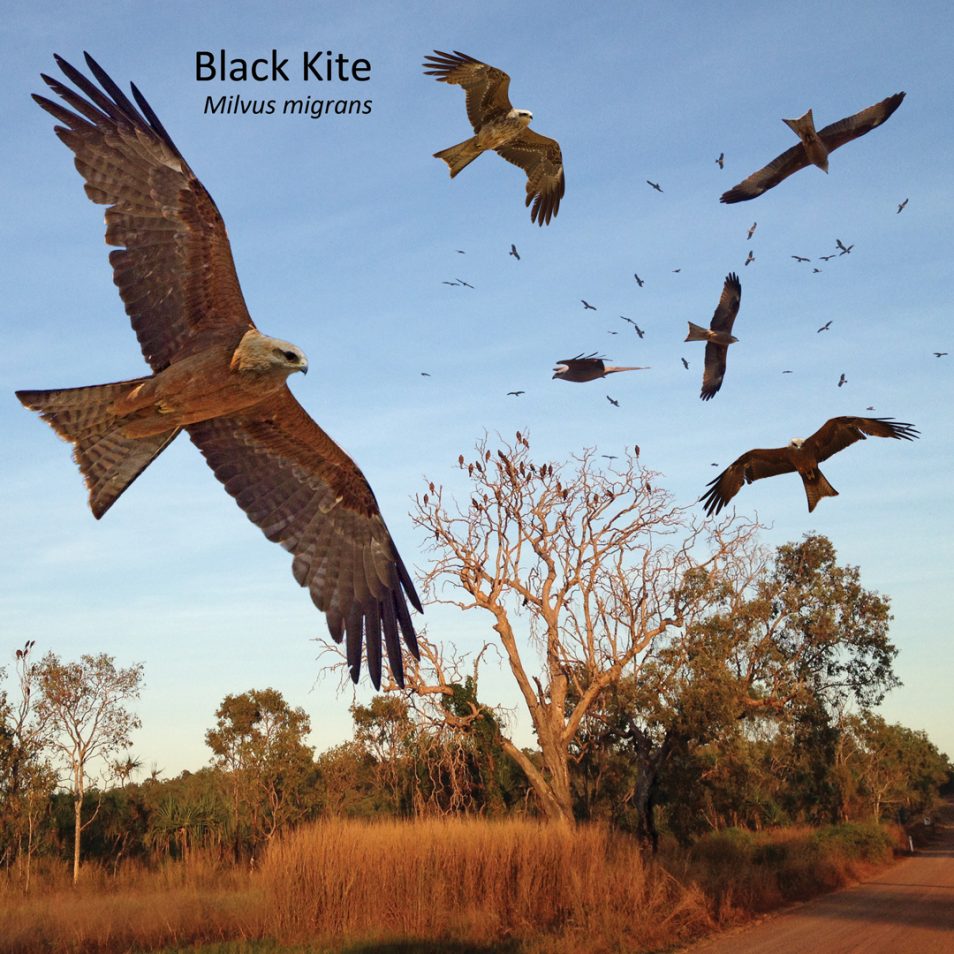 The black kite, on the wing: one of the collages from Australian Birds of Prey in Flight.

Numbats are a small striped marsupials that live in tree hollows. Numbats don’t jut sleep in log burrows — they need logs for their favourite food: termites. Each day a numbat swallows 10% of its own body weight in termites. It takes 20,000 termites to fill its belly. Numbats can feel the tiny vibrations of termites … through their feet!

Once covering 20% of Australia, there are now only 1000 individuals left — this is less than the number of giant pandas left in the wild. These precious individuals are all huddled together in a patch of bushland in southern Western Australia. Over the past 200 years, almost all of the numbat’s habitat has been destroyed … apart of the last stands of Wandoo forest.

Numbats are the closest living relative to the Tasmanian tiger. As the Magical Land of Oz says, let’s work together so it doesn’t suffer the same fate.

I love taking photos of animals, now what?

Well fancy that! You’re in luck. We want you to send us your best (or worst!) animal, plant and fungi photos. The Atlas of Living Australia have partnered with the ABC for their nature doco, and we want to gather as many citizen scientist photos as we can. So get snap happy!

And, just for good measure, here is an echnida cam:

Previous post:
A data-driven energy future is NEAR
Coming up next:
Plans for mega-telescope coming into focus