The first images from ASKAP reveal slices through space

The first images from ASKAP reveal slices through space

ASKAP comprises a cluster of 36 large radio dishes that work together with a powerful supercomputer to form (in effect) a single composite radio telescope 6km across.

What makes ASKAP truly special is the wide-angle “radio cameras”, known as phased array feeds, which can take up to 36 images of the sky simultaneously and stitch them together to generate a panoramic image.

Traditional radio telescope arrays such as the Australia Telescope Compact Array near Narrabri, NSW, are powerful probes of deep-space objects. But their limited field of view (approximately equivalent to the full moon) means that undertaking major research projects such as studying the structure of the Milky Way, or carrying out a census of millions of galaxies, is slow, painstaking work that can take many years to realise.

The special wide-angle radio receivers on ASKAP will increase the telescope’s field of vision 30 times, allowing astronomers to build up an encyclopedic knowledge of the sky.

This technological leap will enable us to study many astrophysical phenomena that are currently out of reach, including the evolution of galaxies and cosmic magnetism over billions of years.

For the past 12 months a team of CSIRO astronomers has been testing these novel radio cameras fitted on a test array of six antennas.

The first task for the team was to test the ability of the cameras to image wide fields-of-view and thus demonstrate ASKAP’s main competitive advantage. The results were impressive! 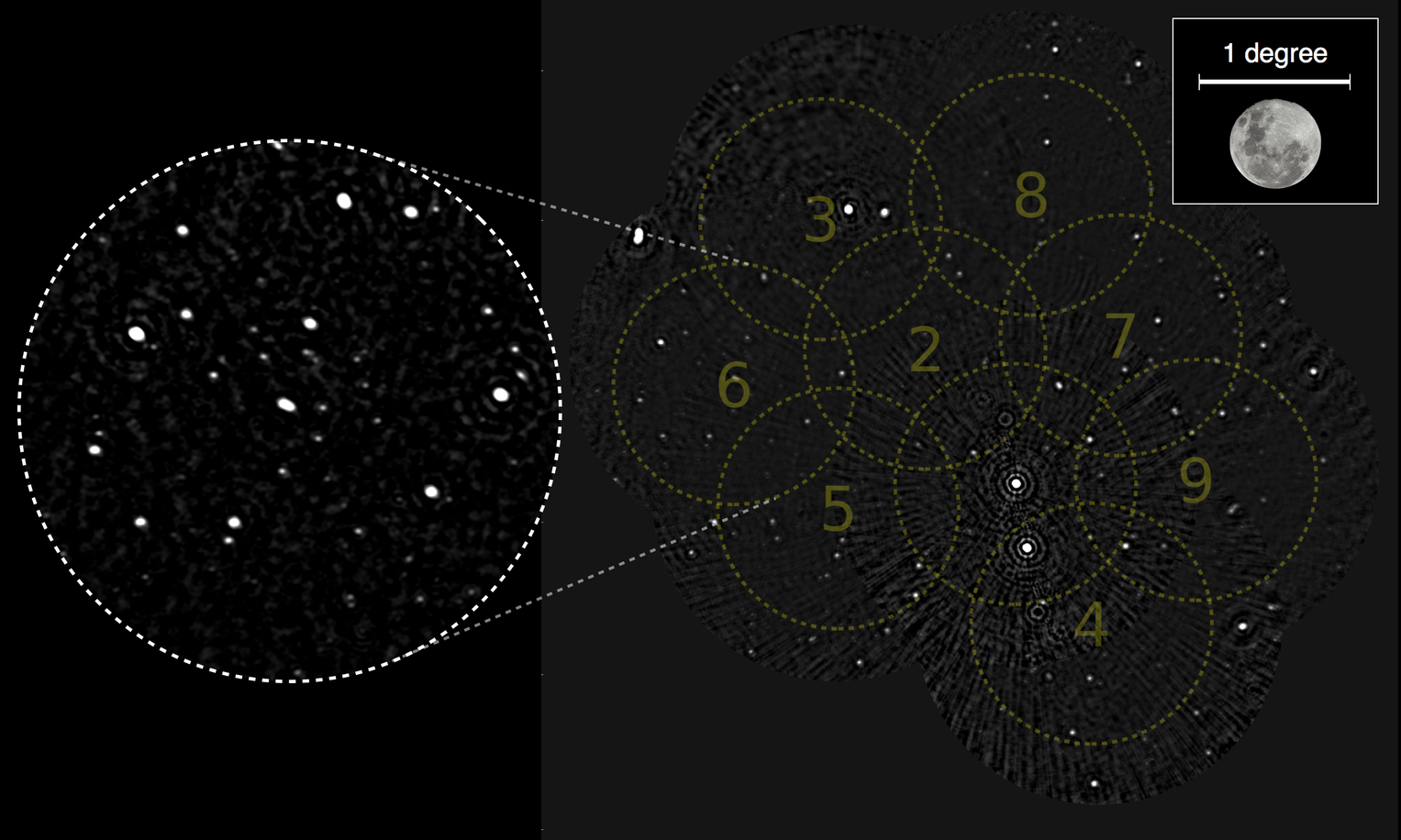 A wide-field image of the sky taken with the ASKAP test array. Image: I. Heywood/ACES team, CSIRO

One of the first test images from the ASKAP test array is seen above. The hundreds of star-like points are actually galaxies, each containing billions of stars, seen in radio waves. Using CSIRO’s new radio cameras, nine overlapping images were taken simultaneously and stitched together.

The resulting image covers an area of sky more than five times greater than is normally visible with a radio telescope. The information contained in such images will help us to rapidly build up a picture of the evolution of galaxies over several billion years.

Where next for ASKAP to look

On the back of this success, the commissioning team turned the telescope to the Sculptor or “silver coin” galaxy to test its ability to study deep-space objects.

Sculptor is a spiral galaxy like our own Milky Way, but appears elongated as it is seen almost edge-on from earth. 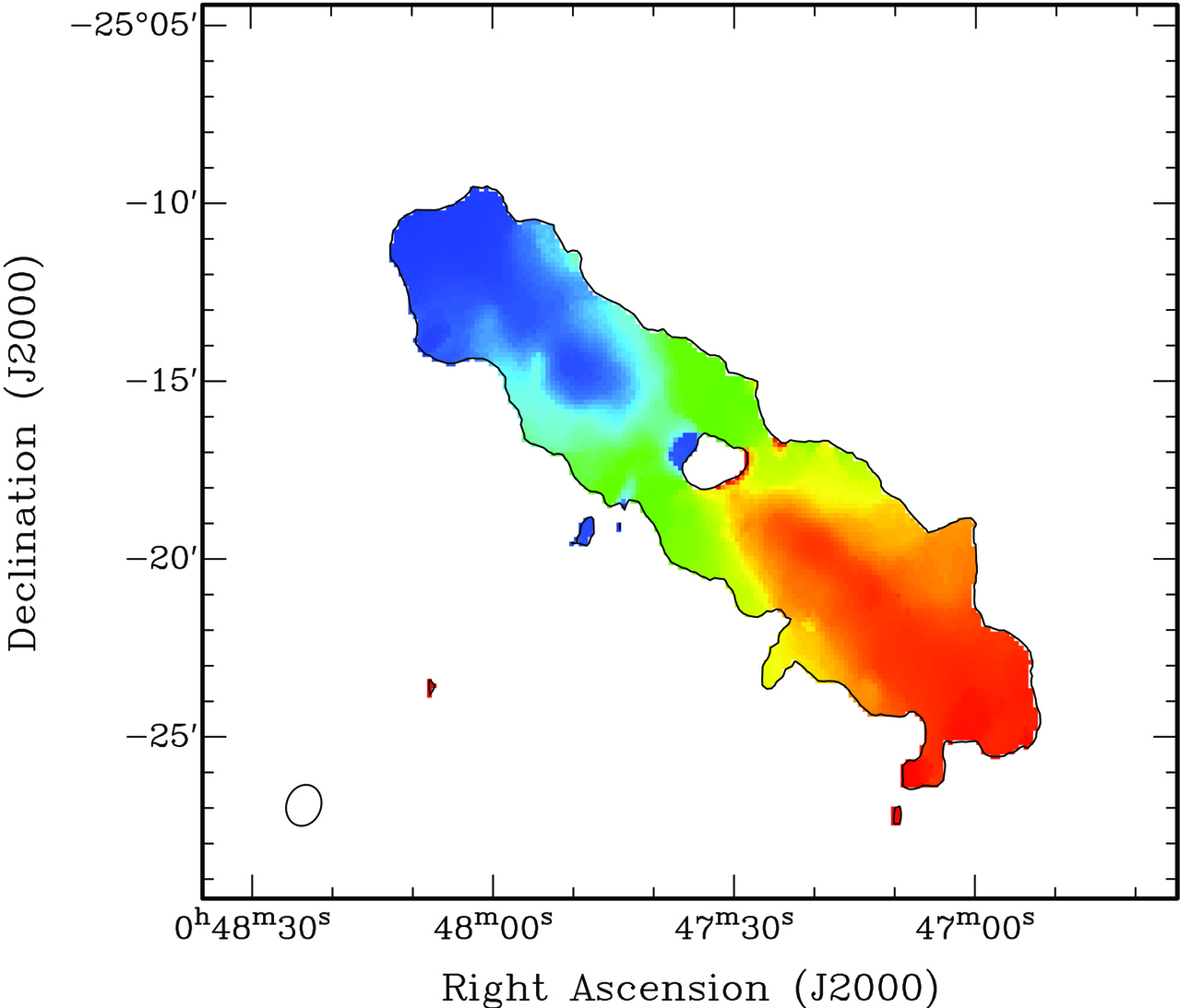 This image (above) shows the radio waves emitted by hydrogen gas that is swirling in an almost circular motion around the galaxy as it rotates.

The red side of the galaxy is moving away from us and the blue side is moving towards us. The speed of rotation tells us the galaxy’s mass.

The team has also tested the ability of the telescope to “weigh” the gas in very distant galaxies. The image (below) shows a grouping of overlapping galaxies called a gravitational lens. 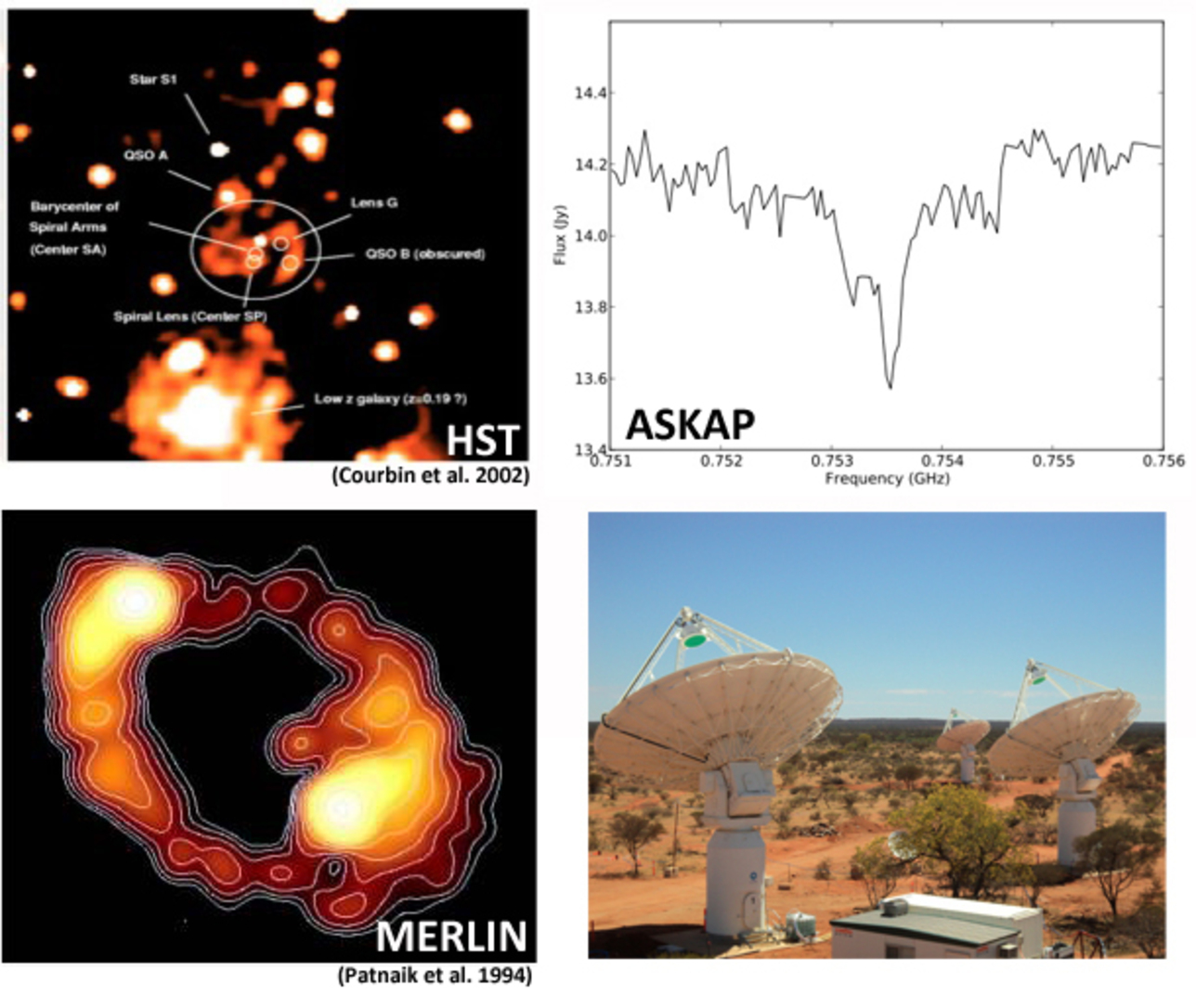 A cluster of galaxies aligned to form a ‘gravitational lens’ was captured using ASKAP’s test array.

Seven billion years ago, radio waves from a distant galaxy were absorbed by a foreground galaxy in this group. That signal was processed by ASKAP to form the spectrum (top right in the above image).

Although not visually pretty, this type of observation has enormous scientific value, allowing astronomers to understand how quickly galaxies use up their star-forming fuel.

The latest demonstration with the ASKAP test array is a movie (below) of layers through a cloud of gas in our Milky Way.

This series of images – similar to an MRI scan imaging slices through the human body – demonstrates the ability of the telescope to measure the intricate motions of the spiral arms of the Milky Way and other galaxies.

Building to the bigger array

These images are just the beginning of a new era in radio astronomy, starting with SKA pathfinders like ASKAP and culminating in the construction of the SKA radio telescope.

Once built, the SKA will comprise a vast army of radio receivers distributed over tens to hundreds of kilometres in remote areas of Western Australia and South Africa.

Just like ASKAP combines signals from several dishes, the SKA will use a supercomputer to build up a composite image of the sky.

Each ensemble of antennas will work together to photograph distant astronomical objects that are so faint, that they can’t be seen at all with current technology.

The SKA will thereby open up vast tracts of unexplored space to scientific study, making it a game-changer in astrophysical and cosmological research.

Previous post:
Radio astronomy: the next generation
Coming up next:
Going with the throughflow