The electricity network is changing fast, here’s where we’re heading

The electricity network is changing fast, here’s where we’re heading

Over the past two years better batteries, smarter homes and more efficient solar have changed the way we look at the future of the electricity sector. So where is the industry headed between now and 2050? 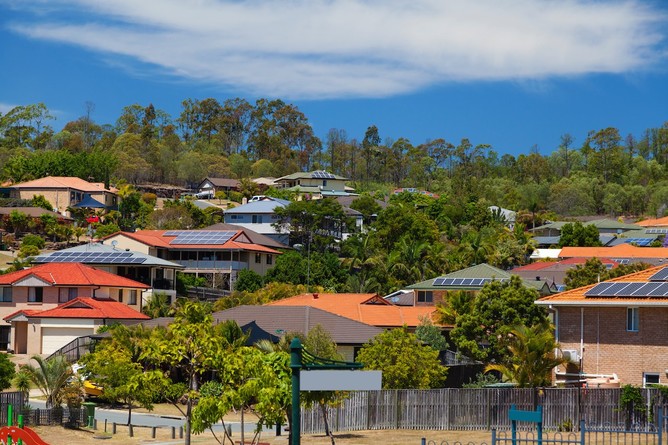 Two years on we’ve updated those scenarios as part of the Electricity Network Transformation Roadmap project with the Energy Networks Association. We expect retail prices to rise further in coming decades, but not as much as we originally thought. Concerningly, we also expect the gap in electricity costs between households with and without solar to increase dramatically.

In the 2013 forum we produced four possible future scenarios for Australia’s electricity network: 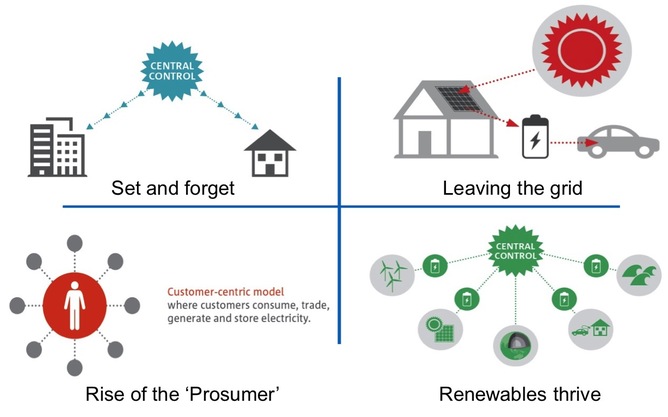 Exactly which vision of the future, or some combination, will unfold remains uncertain. However most imply massive changes to the electricity sector.

In 2015 these scenarios appear to have stood the test of time. Some of the most radical scenarios – a third of people leaving the grid, 25-45% of electricity generated on site, and 100% renewables – are still plausible.

A key change is that solar and storage costs have become significantly more competitive since 2013. In 2015, solar panels and battery storage costs are already around 20% cheaper than it was expected in 2013.

Going forward, the updated analysis projects battery storage costs to fall by approximately two-thirds (60%) in the next 10 years, while solar panel costs are expected to fall by around one-third (35%) over the same time frame.

Electricity bills have fallen on average since the 2013 forecast. They are projected to rise again in decades to come as we switch to low emission generation technologies. But retail bill increases will be smaller than previously forecast and are expected to remain the same share of average household income, approximately 2-3 % as they are today.

While falling solar and storage costs help to put downward pressure on the average bill compared to 2013 forecasts, the updated modelling finds that the gap between those owning and not owning solar photovoltaic panels is wider. 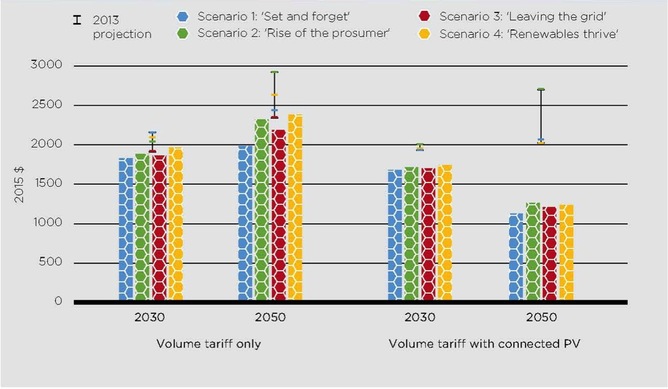 The updated scenario analysis identifies total system expenditure (including capital and operating expenditure) of A$950-$1,140 billion over the next 35 years.

Customers and their agents are expected to spend between A$224-469 billion in onsite or off grid systems such as solar panels and battery storage. The remainder of expenditure is expected to be spent on grid in traditional centralised generation, transmission and distribution. Those traditional sectors are expected to play more diverse roles to address evolving customer needs than they have in the past. 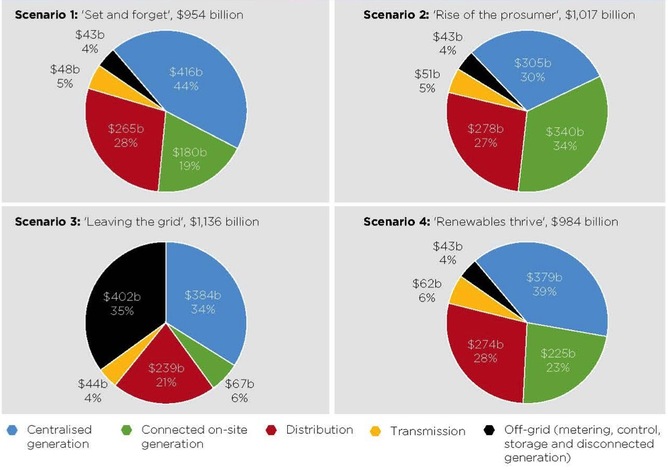 Projected cumulative electricity sector investment and operating expenditure to 2050 (including percentage contribution of each supply chain component), by scenario CSIRO

Not everything has advanced faster than expected. As the climate talks in Paris come to their conclusion, it remains clear that the electricity sector will be required to reduce its greenhouse gas emissions over time.

Less clear is what policy will drive that transformation. The reduction in the Large-scale Renewable Energy Target from 41 to 33 terawatt-hours by 2020 and the repeal of the carbon pricing legislation have reduced pressure on the generation sector to change in the short term. The updated scenarios assume a new greenhouse gas emission constraint, of some type, is introduced from 2020.

Another aspect where less progress has occurred than expected has been in electricity pricing reform. In 2013 it seemed obvious that Australia’s current residential and small-commercial customer retail pricing structure, which is over-reliant on volume-based pricing signals, has been out-grown. The lack of progress here remains a significant risk for the sector.

Lower cost solar panels means stronger incentives for adoption. But also creates the potential for increased cross-subsidies among customers if retail pricing structures are not addressed. That is, continued volume-based pricing could mean non-solar owners will pay a greater share of network costs while not necessarily using the network capacity any more than a solar owner.

Falling storage costs help alleviate this problem as it allows solar owners to reduce both their volume and their use of network capacity. Non-solar owners will also be able to use storage to reduce their demand at peak times, alleviating capacity constraints in networks. But the adoption of storage for grid-connected customers requires new incentive structures.

While the falling cost of solar and batteries has decreased the cost of going off-grid, the projected cost of staying on grid has fallen also, and this is partly due to the expected role of batteries in peak demand management.

As a result, while people may choose this option for other reasons, on a purely economic basis, off-grid systems are not expected to be economically viable for existing connected customers until beyond 2030 – the same result as the 2013 modelling.

Previous post:
Why is Asia so hungry for our food?
Coming up next:
Using big data for small science