The day the Sun stood still

The day the Sun stood still

But, um, what exactly is a solstice?  That font of all knowledge, Wikipedia, says:

“The word solstice is derived from the Latin sol (sun) and sistere (to stand still).”

But of course the Sun doesn’t literally stand still. So what DOES it do?

Back to the Sun.

Imagine you’re a garden gnome in Australia, standing outside looking north all the time. This is what you’ll see at different times of year. 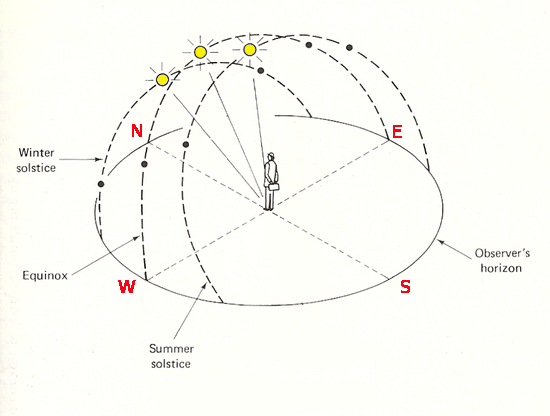 What a north-facing Australian garden gnome would see.
Adapted from http://solarwiki.ucdavis.edu/@api/deki/files/175/

The extreme cases are the solstices, summer and winter, which in the southern hemisphere occur in December and June respectively.

OK, so this is what you see on the ground. Why does it happen?

Of course, the Sun doesn’t really zip round the Earth like this — the Earth spins on its axis. But just for the moment, let’s think of how the Sun seems to move. 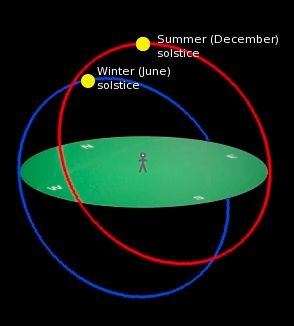 The tracks of the Sun at the winter and summer solstices, for an observer at the latitude of Sydney, Australia.
Created with the simulator at http://astro.unl.edu/classaction/animations/coordsmotion/sunmotionsoverview.html .

Now let’s zoom out into space and see how one of those circles — the winter (June) solstice path — is created. Play the video:

The orange line shows where the Sun would go overhead as the Earth rotates. If you were standing anywhere on this line at the June solstice, the Sun would come up, go right overhead, and then set.

Notice how, with the Sun going overhead in the northern hemisphere, the North Pole is enjoying constant daylight, while the South Pole and regions around it are always in the dark.

If you were the Sun, what would you see? NASA has done the imagining for you.

The Earth, seen from the Sun’s position, at the time of a June solstice.
Source: NASA (http://science.nasa.gov/science-news/science-at-nasa/2000/solstice/)

The Sun has a nice view of the northern hemisphere, but it’s seeing the southern hemisphere at an angle — and it’s not even glimpsing the South Pole.

So that’s the winter (June) solstice. Of course, when the Sun reaches its southernmost point in December, everything is reversed, and we get the summer (December) solstice.

Why does the Sun “move” north and south at all? Because the Earth’s axis is tilted. But you already knew that … 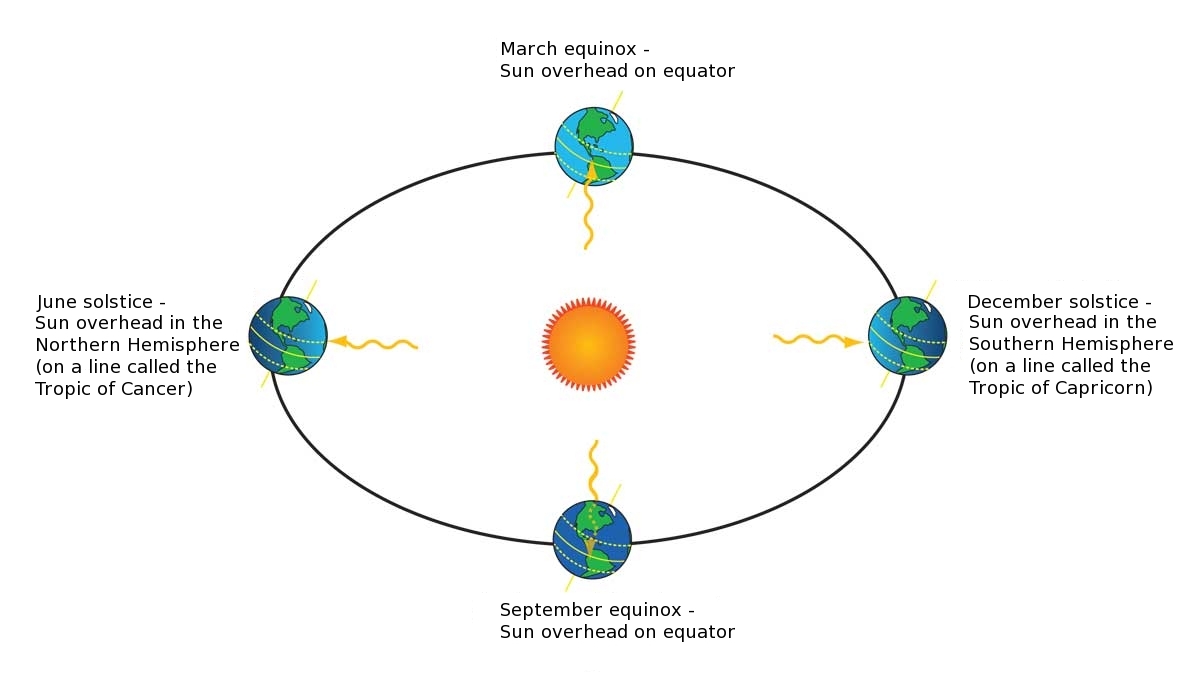 Previous post:
87… a good innings
Coming up next:
The day the Sun stood still