Electrifying stuff: your clothes could power your gadgets – and soon. Image: Stephen Poff

Imagine having a wafer-thin touchscreen on your sleeve which, like a scene out of a Philip K. Dick novel, gives you all the functionality of a smartphone without the awkwardness of a cumbersome battery.

The best part about this scenario is it may not be as far from reality as you think.

The bulky packaging of batteries limits innovation of some of the amazing new, ultra-slim electronics today.

If you open up an iPhone 5, you’ll see that a large proportion of the phone’s volume is taken up by the battery.

But flexible batteries that can be incorporated into fabrics offer a game-changing way of powering personal devices – and take us into a new world of wearable electronics.

My colleagues and I form one of several applied research groups developing both flexible batteries and the energy harvesting systems needed to charge them. 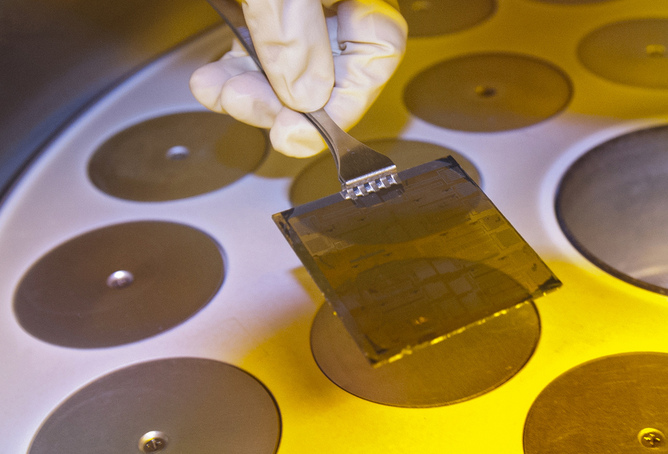 Flexible batteries can be used to store the captured energy from human movement via piezoelectric materials woven into fabrics or inserted into silicone rubber.

You could have a jacket that’s a wearable mobile phone, with a flexible electronic screen printed on the cuffs, flexible phone circuit boards woven into the fabric, and a microphone in the collar. Just input the number on your cuff, and start talking.

There would be no risk of running out of power mid-conversation – you’d just move your arms about to charge the batteries. The jacket would be washable – but you’d need another “phone jacket” on the day it was in the wash.

In a similar advance, a cocktail dress wired for Bluetooth that lights up when the wearer gets an incoming call won a design competition for a London College of Fashion student. It’s hard to ignore that kind of phone call.

The same technology can power smart sports clothing, so that your jogging suit or cycling shorts could carry a global positioning system (GPS) unit and a fitness monitor powered by your movements as you pedal or run.

You could monitor and analyse your workout before you hit the shower. Australian Football League players already optimise their playing performance using GPS trackers carried between their shoulder blades.

Smart cycling shirts with pedal powered light emitting diode (LED) panels could help keep cyclists visible on the road – or give a turning signal on the back of their jacket. 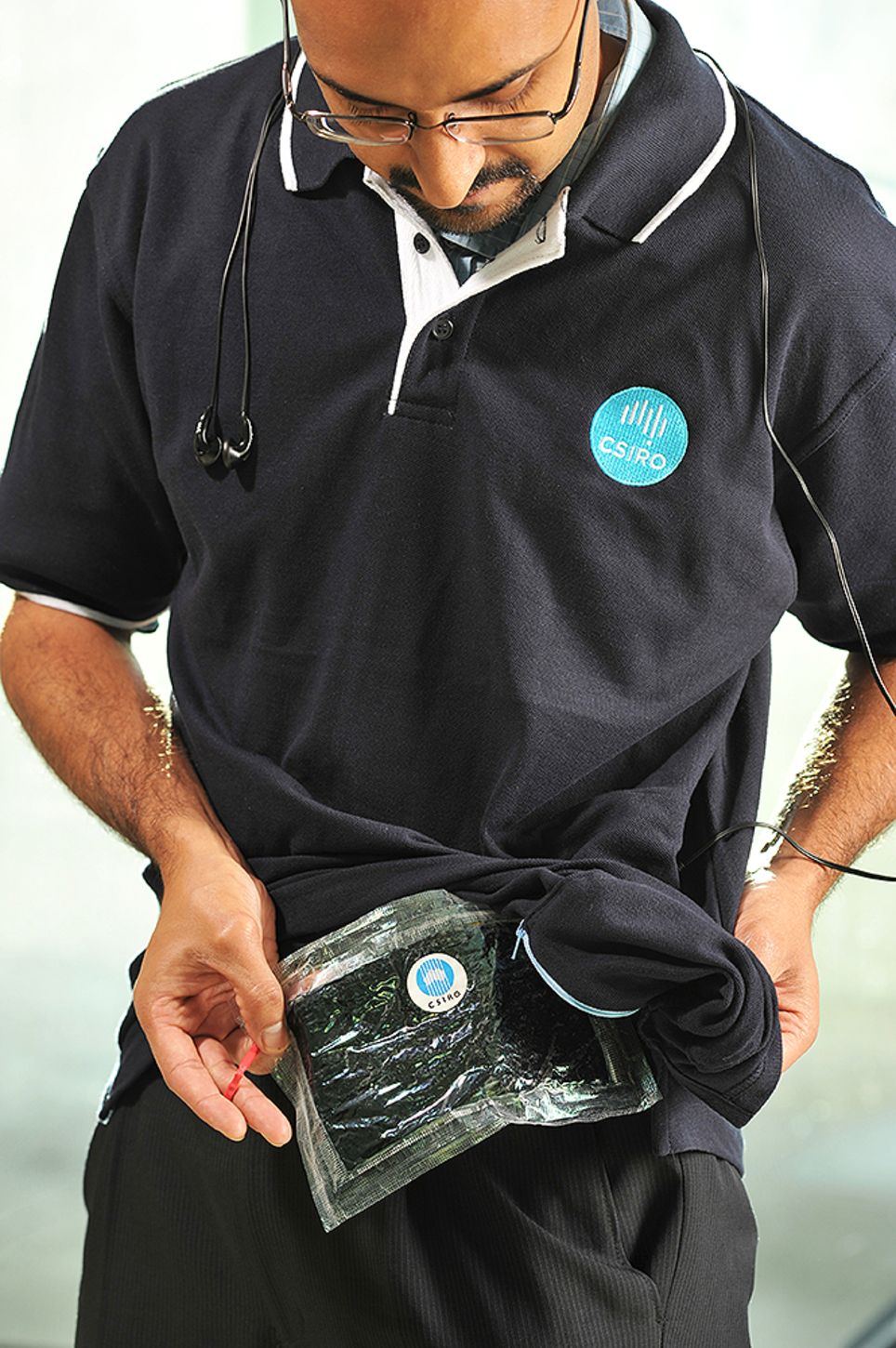 CSIRO researcher Dr Anand Bhatt models a shirt with a pocket incorporating the CSIRO flexible battery, which can be used to power small consumer electronic devices.

Tent panels that incorporate flexible batteries could capture wind energy and use it to charge a personal computer, GPS or personal locator beacon, such as an Emergency Position Indicating Radiobeacon (EPIRB) – making searches for skiers and hikers lost in the bush easier.

The same technology is being used to capture and store energy to power military electronic equipment, so that soldiers in the field don’t have to carry extra weight of batteries.

On a larger scale, buildings made with fabrics which capture wind energy are proposed as a renewable power source.

Footpaths which capture energy from footsteps are on the market – there is even a dance floor which powers the air conditioning for an eco-nightclub using kinetic energy (energy of motion) from dancing patrons. 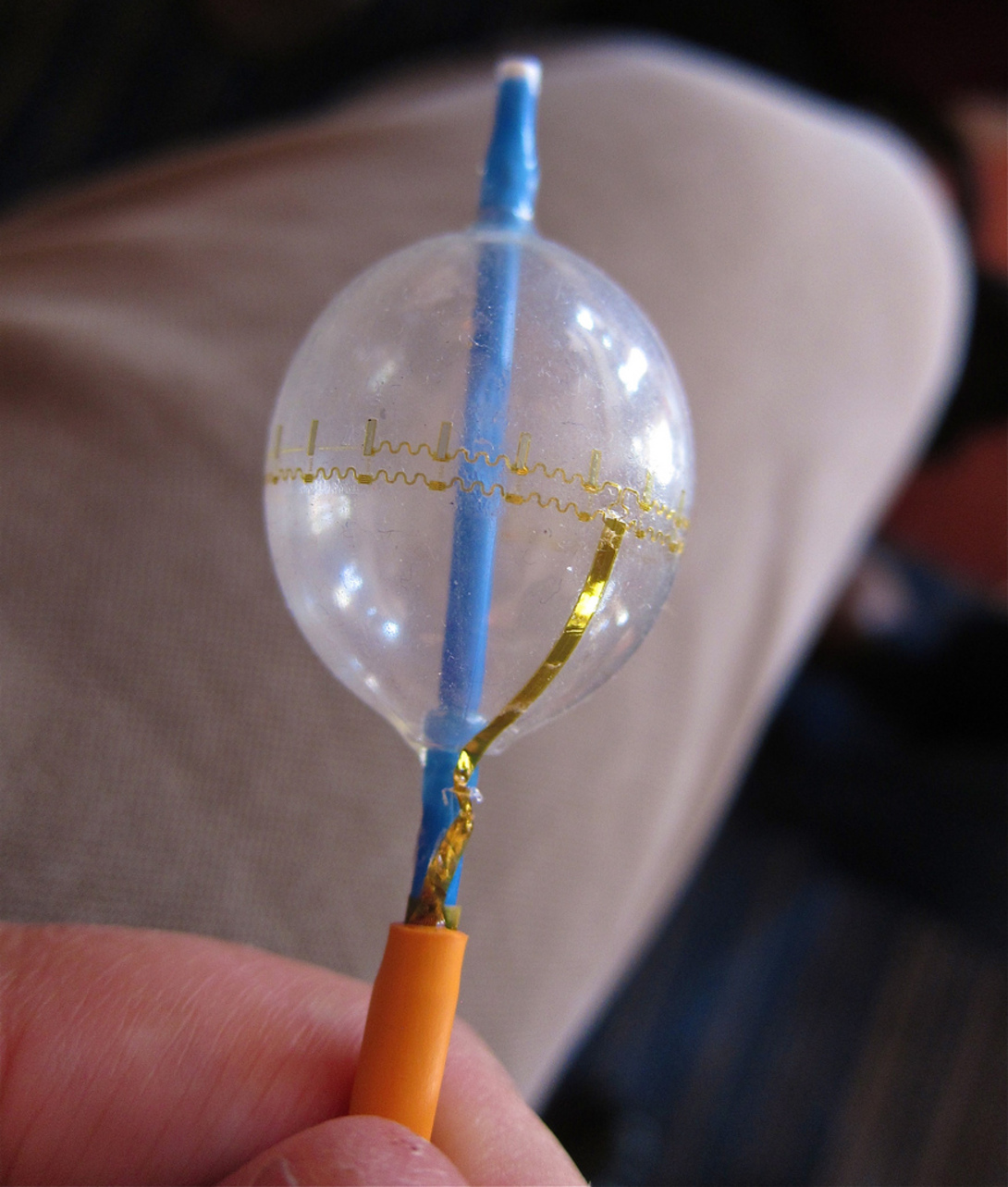 Temperature and EKG sensors and LEDs wrapped around a cardiac balloon catheter. The wires are stretchable coils. Image: jurvetson

A shirt incorporating a heart rate monitor could sense changes in heart rhythm in elderly or cardiac-impaired patients – and summon emergency services if patient health is severely compromised by a change in heart rate.

But for those of us for whom batteries are a constant item on the shopping list, perhaps the biggest change that wearable electronics offers is freedom from needing to buy spare batteries.

Now that will make a difference to my personal retail experience.

Previous post:
PULSE@Parkes in Japan
Coming up next:
We didn't start the fire…