Silence please! Why radio astronomers need things quiet in the middle of a WA desert

Silence please! Why radio astronomers need things quiet in the middle of a WA desert

Come and check out the Murchison Radio-astronomy Observatory (MRO)! 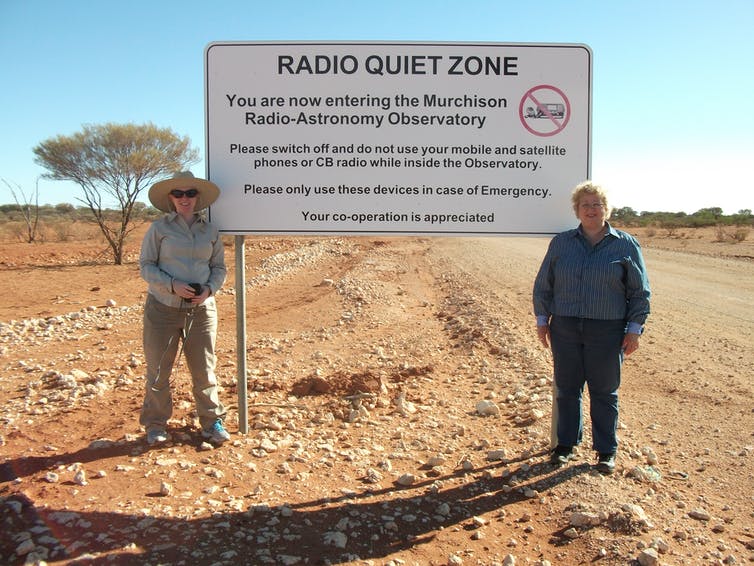 Me (left) and my colleague Carol Wilson at the signs marking the start of the Australian Radio Quiet Zone WA.

A remote outback station about 800km north of Perth in Western Australia is one of the best places in the world to operate telescopes that listen for radio signals from space.

It’s the site of CSIRO’s Murchison Radio-astronomy Observatory (MRO) and is home to three telescopes (and soon a fourth when half of the Square Kilometre Array, the world’s largest radio telescope, is built there).

But it’s important these telescopes don’t pick up any other radio signals generated here on Earth that could interfere with their observations.

That’s why the observatory was set up with strict rules on what can and can’t be used on site.

Listening to the sky

One of the radio telescopes is the Australian Square Kilometre Array Pathfinder (ASKAP) operated by CSIRO. It’s actually an array of 36 individual antennas that work together as one large telescope.

ASKAP can capture high-quality images and scan the whole sky, a bit like a wide-angle lens allowing you to see more through a single viewpoint. It has already found a niche as a finder and localiser of fast radio bursts. These are flashes of radio waves in space that last just milliseconds.

The MRO site also hosts the Curtin University-led Murchison Widefield Array (MWA) telescope, which has been peering into the universe’s “dark ages” and finding no trace of aliens. 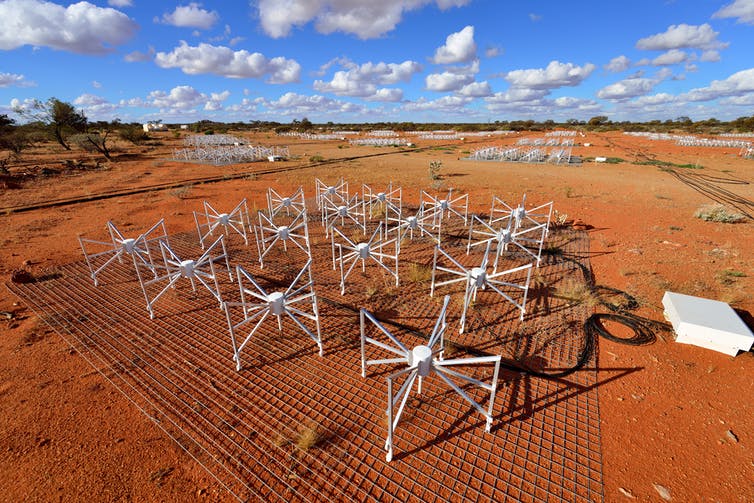 The other radio telescope is Arizona State University’s EDGES, which is looking for signals from the formation of stars and galaxies early in the universe.

These internationally recognised instruments detect mere whispers from space – radio waves that have travelled for billions of light-years before reaching Earth to sources of unwanted radio frequency interference, known as RFI.

RFI can be caused by radio transmitters, such as mobile phones, CB radios or even wi-fi devices. Electrical equipment such as power tools can also be a problem. 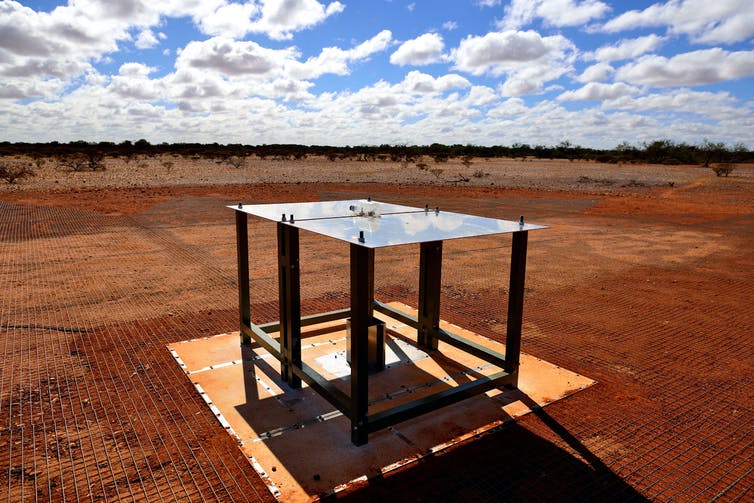 The Experiment to Detect the Global EoR Signature (EDGES) instrument.

Way outback and beyond

What makes the Murchison region an ideal operating environment for limiting RFI is the location has minimal human activity or occupancy. The Murchison Shire is the size of a small country but with a population of only 100 people.

The Shire covers an area of 49,500km² — roughly the size of the Netherlands in Europe.

With the help of the Commonwealth and Western Australia governments, significant regulatory protection has been established to protect the site.

For example, the Australian Radio Quiet Zone Western Australia (ARQZWA), established by the Australian Communications and Media Authority, created a fixed zone around the MRO site to protect the telescopes from interference. Other groups intending to use transmitting equipment must seek permission first and follow any guidelines given. 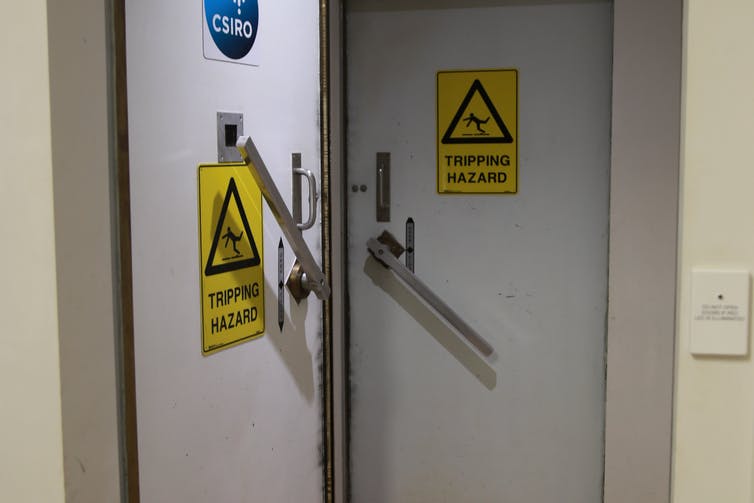 The twin airlock-style RFI doors at the MRO control building.

When staff go out to the site for the first time they get training about RFI, health and safety and indigenous culture.

Mobile phones need to be turned off at all times (which is fine, because it’s too far from any mobile towers to work anyway).

Bluetooth devices (wireless mice or fitness trackers) should be switched off or left behind, laptops should have Bluetooth and Wi-Fi switched off. The list goes on.

The MRO control building has a double RFI door to enter through – think airlock-style in any sci-fi movie.

The site has a hybrid power station with solar panels that deliver up to 40% of the observatory’s power.

During the day, when the clean energy system generates more power than the site requires, the excess energy is stored in a 2.5MWh lithium-ion battery, one of the largest in Australia.

The design specifications of the MRO power station ensure the facility contains the RFI generated by its own electronic systems. 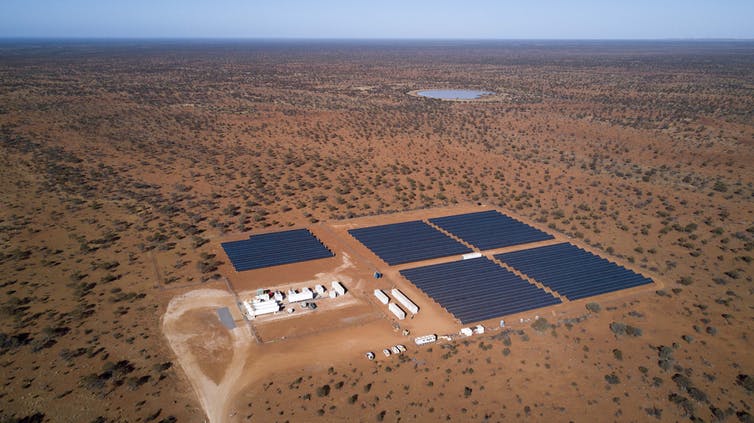 Aerial view of the MRO power station, which has an array of 5,280 solar panels and battery with RFI shielding.

You can’t stop everything

Unfortunately, as with all Earth-based locations, the telescopes receive RFI from orbiting satellites, which fall under international jurisdiction. The site also receives signals from aircraft safety beacons on commercial flights over the region.

Astronomers have developed software to remove this RFI from data as it usually overwhelms any astronomical signals.

We’ve also had several recorded occasions (usually during summer) when radio signals from as far away as Perth have been detected, due to atmospheric ducting. This is where the atmosphere effectively “guides” the radio waves much further than they would normally travel, due to changes in the atmospheric layers. Fortunately this is very rare.

The MRO has been in existence for about ten years, one of the newest such observatories in the world, but the 3,450km² Boolardy pastoral station on which it stands was established back in the 1850s.

The traditional owners are the Wajarri Yamatji, who have lived in the region for tens of thousands of years. Together we negotiated an Indigenous Land Use Agreement (ILUA) in 2009 for the current telescopes, and we are negotiating a second one to allow the construction of the SKA.

Protection of the indigenous heritage is a significant component of this agreement and a major responsibility for the Australian government, CSIRO and the SKA organisation.

We also work collaboratively with neighbouring pastoralists to ensure they can carry on their daily work, including practices such as mustering, in a way that is compatible with radio astronomy. 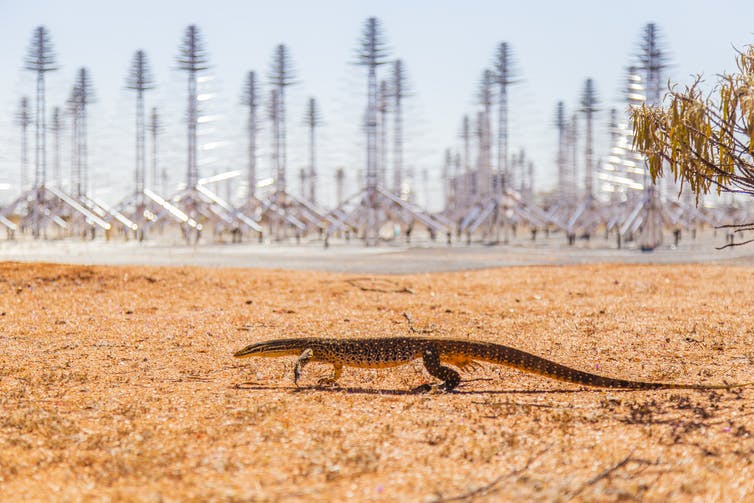 A goanna (or bangara in Wajarri Yamatji language) strolls past some of the antennas.

Visitors are not welcome

Due to the remoteness of the MRO and the radio quiet rules and regulations, even those involved with the projects are discouraged from visiting (I’ve only been to the site once). Tourists are discouraged. We’ve distributed fact sheets to locals and visitor centres to explain this in more detail.

But you can visit the site remotely. We’ve created a cool techy replacement where you can take a virtual tour of this unique and wondrous place.