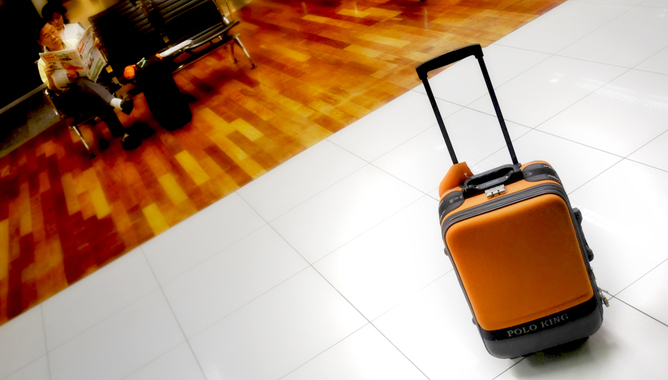 Suspicious packages and public spaces go together like, well, like suspicious packages and public spaces. Sadly, they’re something we all know about, get warned about and, increasingly, have to worry about. But a solution may be literally at hand: we have developed a handheld 3D mapping device with the potential to revolutionise the scanning of buildings.

Is there a need for such a device? Without doubt – and regrettably – there is.

After April’s Boston bombings, journalist Jeffrey Goldberg wrote the US is now in the “Era of the Suspicious Package”. But it’s not a purely American concept.

Earlier this month, almost one third of the Melbourne CBD was shut down and shoppers evacuated from busy Bourke St Mall after a suspicious package was “cleared” by police. 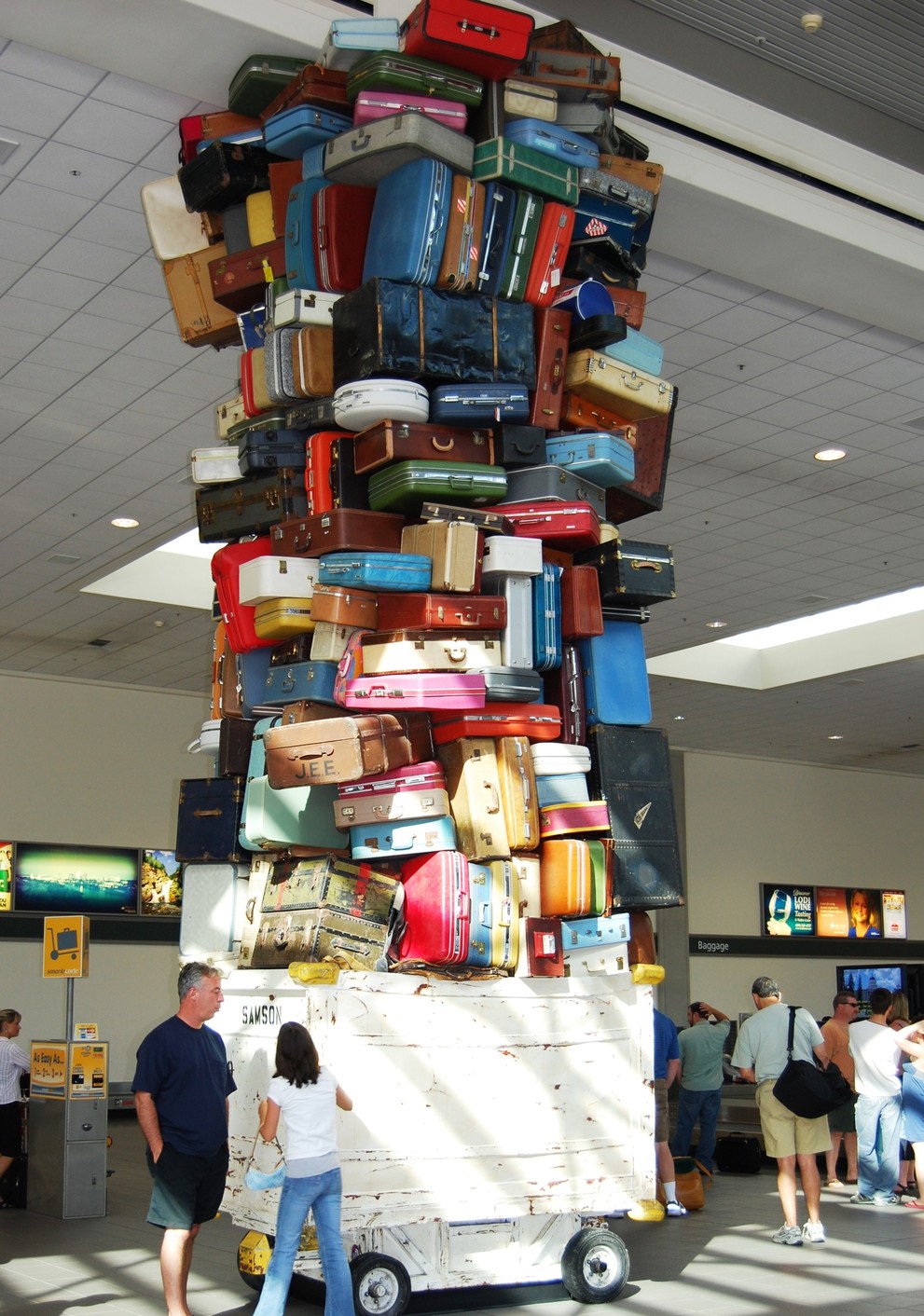 While this “era” has been around since the introduction of the “If You See Something, Say Something” campaign launched in the US in 1993, anyone who has recently travelled through an airport can tell you that the threat of suspicious packages is increasingly heightened.

Latest developments include an increased military presence at some airports, and delays due to a greater number of passengers being searched.

We often see circumstances at special events whereby police are given extra powers to enforce increased security measures, such as the 2014 G20 Summit in Brisbane, including investigating suspicious items and searching backpacks.

The challenge to the security industry to ensure the general public is kept safe and unharmed has never been greater.

At the moment, video analytics are one of the most common technology-based ways to detect security threats of this type. But a video can’t catch everything, which is why areas are also checked manually.

One potentially effective method to identify suspicious packages is to scan an area every few hours, and create very detailed three-dimensional maps. Comparing maps taken at different times allows one to see if any objects have been added or moved.

This technology is ideal for security personnel, as it would enable them to easily scan conference centres and hotels. For example, it could be used at international governmental events such as G8 and G20 meetings, or sporting events such as the upcoming Commonwealth Games where there is the potential for people to be threatened by suspicious packages placed in publicly accessible areas. 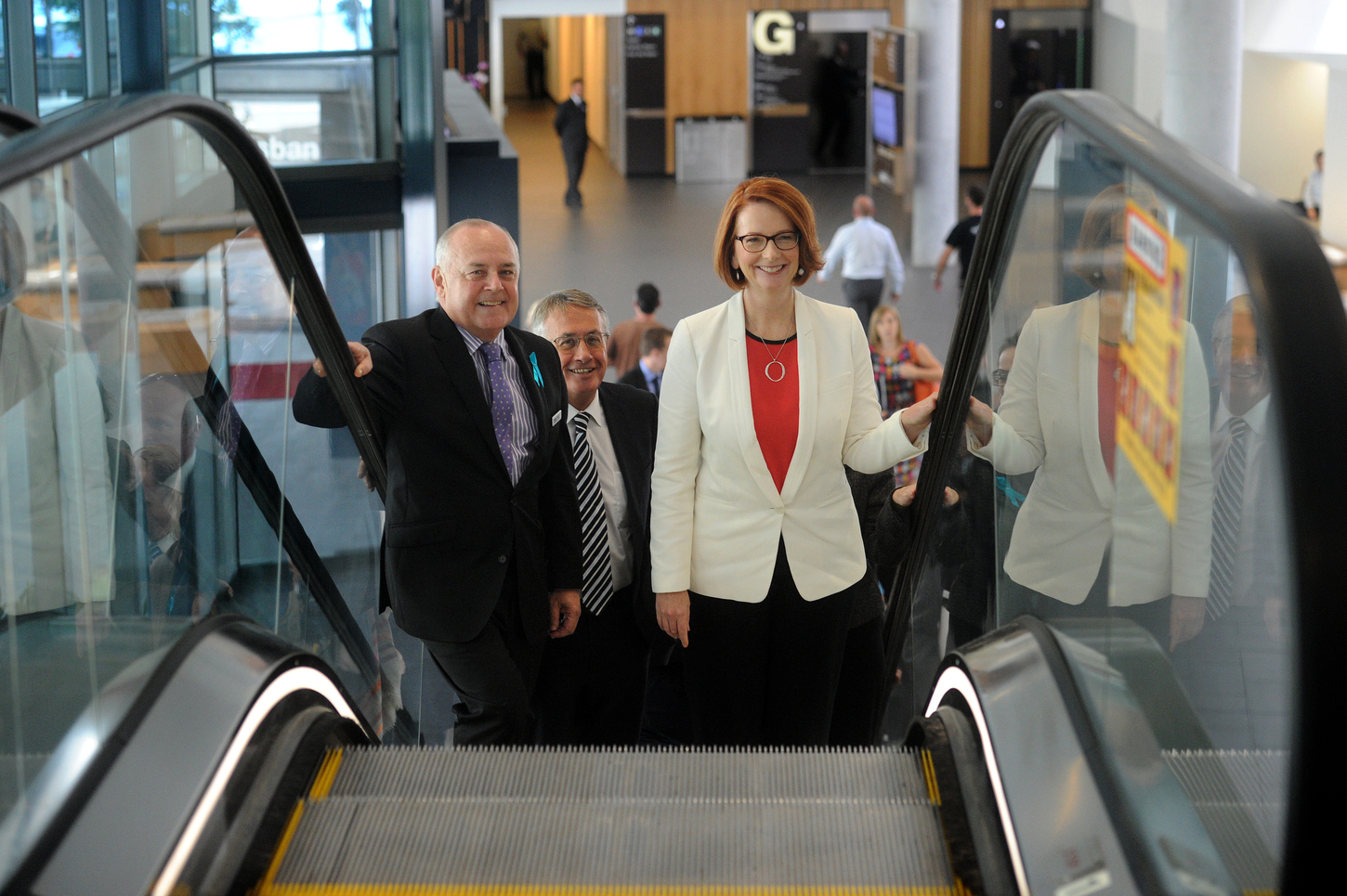 General manager Robert O’Keefe accompanies Julia Gillard and Wayne Swan during an inspection of the Convention Centre in Brisbane, the site of the 2014 G20 Summit. Image: AAP.

But this method is seldom used because it takes hours to scan an area to create an accurate and detailed enough map.Traditional 3D mapping technology typically consists of a heavy tripod and laser scanning unit that must be moved around to numerous locations where local scans are taken.

These numerous local scans must then be stitched together later to form a coherent model of the building or area being recorded. This process can be cumbersome, labour intensive, and far too slow to be helpful in quickly and efficiently detecting any changes such as packages being placed in an area.

As mentioned at the outset, we have developed a novel, handheld 3D mapping device, named Zebedee, which has the potential to revolutionise the process of scanning buildings. The handheld component weighs less than 700g, making it a truly portable scanner that can create a 3D map in most areas where a person can walk, crawl, or climb.

By using a laser scanner that swings back and forth on a spring, the device can capture millions of detailed measurements as the operator walks through a building. The raw data can be quickly processed and turned into a 3D map.

For example, if it takes 20 minutes to walk through the critical areas of a venue, then it will take less than 20 minutes to process the data and compare it with what was collected the day, or hour, before. Any changes can be highlighted and quickly identified. 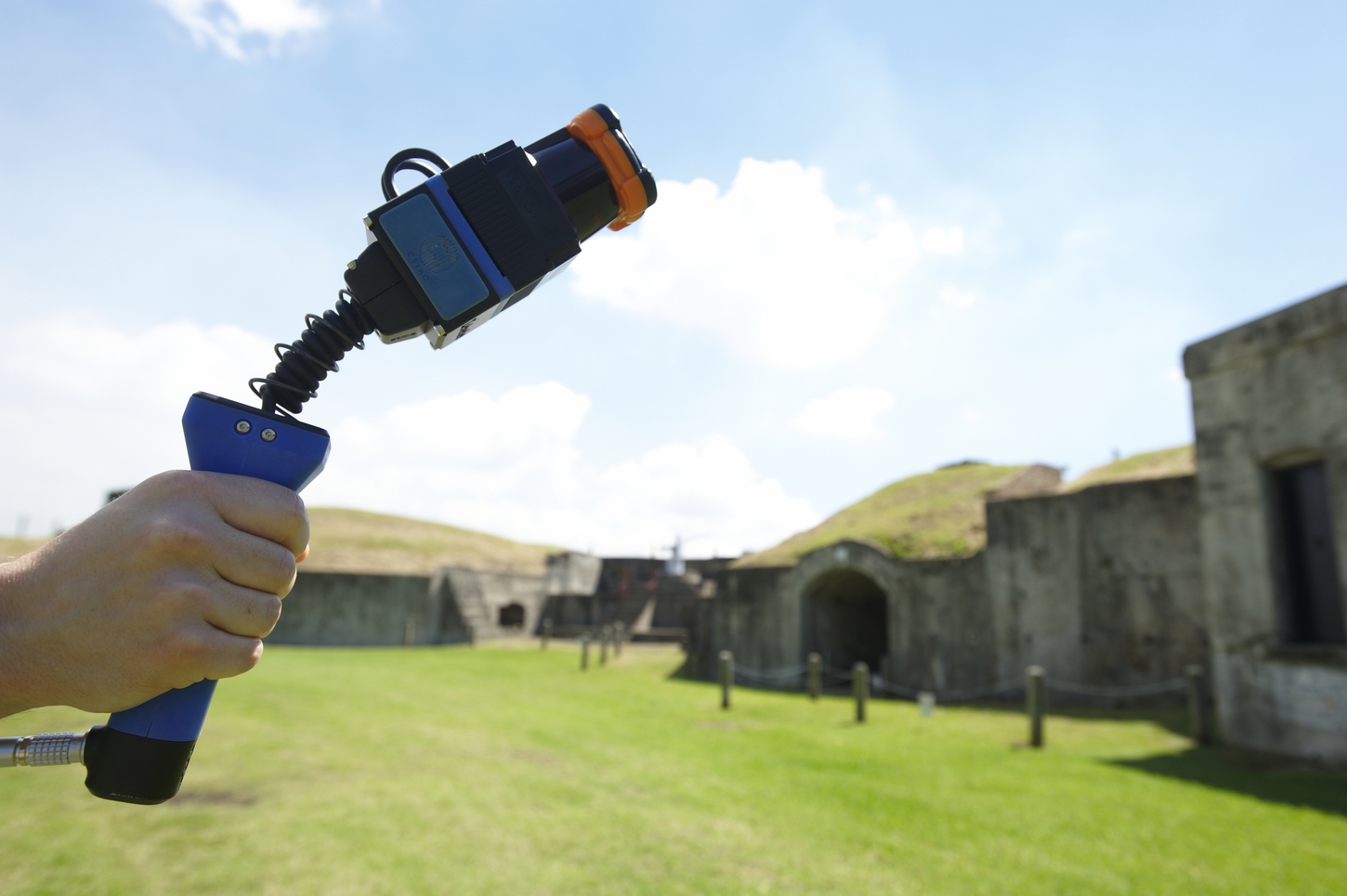 Zebedee scanner in use at Fort Lytton
Show descriptionHide description
If you wanted to check if anybody had moved the furniture in the lobby of a hotel ahead of an important meeting, you could walk through the hotel lobby with Zebedee in your hand.

You could walk up the stairs in the lobby and scan the areas overlooking the atrium, ride the escalator scanning areas as you go and scan behind and under the reception counter and in the luggage store.

This process could be followed each day or each hour to check for differences. On-site security could be alerted to any discrepancy highlighted by the system and could go and check to see what has actually changed.

Is the change explainable, or is there something more sinister going on? In this way, Zebedee could potentially increase the effectiveness of security personnel at a site.

We may be currently living in the “Era of the Suspicious Package”, but with the advent of breakthrough handheld 3D mapping technologies we may soon be entering a new age where security forces are empowered with improved tools to help them identify which packages are threats, and which are simply excess baggage.

CSIRO will be showcasing the Zebedee 3D mapping technology during the CeBIT conference in Sydney, May 28-30, 2013.

Previous post:
Film Review: Handing back the past
Coming up next:
You can count on ERIC in a crisis