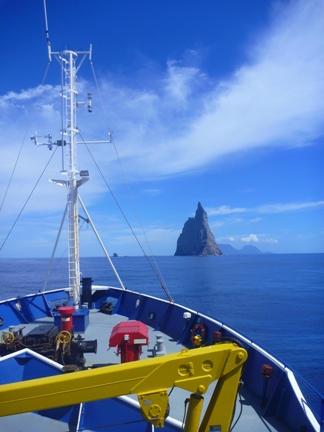 THIS MEDIA RELEASE WAS ISSUED BY THE UNIVERSITY OF WOLLONGONG ON 6 MARCH 2013.

Researchers from the University of Wollongong and Geoscience Australia have been filming the ancient relics of coral reefs formed around 8000 years ago, around a remnant volcano in the Lord Howe Island Marine Park, which sits within the new Lord Howe Commonwealth Marine Reserve.

“We have been able to map large sections of the seafloor in the shallower areas around the pyramid,” Professor Colin Woodroffe said, “and discovered that coral flourished there in the past.”

This research is a further collaboration between the University of Wollongong, Geoscience Australia, the NSW Department of Primary Industries and the managers of the Lord Howe Island Marine Park. The researchers are working closely with the park managers to ensure that the results of the study can be incorporated into future management and monitoring plans.

Geoscience Australia Geologist, Dr Brendan Brooke said the ancient coral system indicates that around 8000 years ago the sea level was about 30 metres lower than it is today.

“The seafloor samples collected here will help us understand how coral reefs responded to changes in ocean temperature thousands of years ago, and can provide an insight into how today’s reefs may respond to current and future environmental changes” Dr Brooke said.

The underwater video of the fossilised reef provides further information about the seabed habitats of the Lord Howe Island Marine Park. Interpreting the habitats is a part of a doctoral thesis that will be undertaken by Michelle Linklater, from the University of Wollongong, in collaboration with the Marine Park Authority.

Here are some photos from the research voyage.

Previous post:
Wormhole Wednesday
Coming up next:
From cancer genes to train timetables