It’s been almost seven years since Pluto was re-classified as a dwarf planet. At 15:34 CEST on 24 August 2006, the International Astronomical Union voted on two key resolutions that saw Pluto become a dwarf planet, and dwarf planets cease to be considered planets (that is, everywhere except New Mexico). 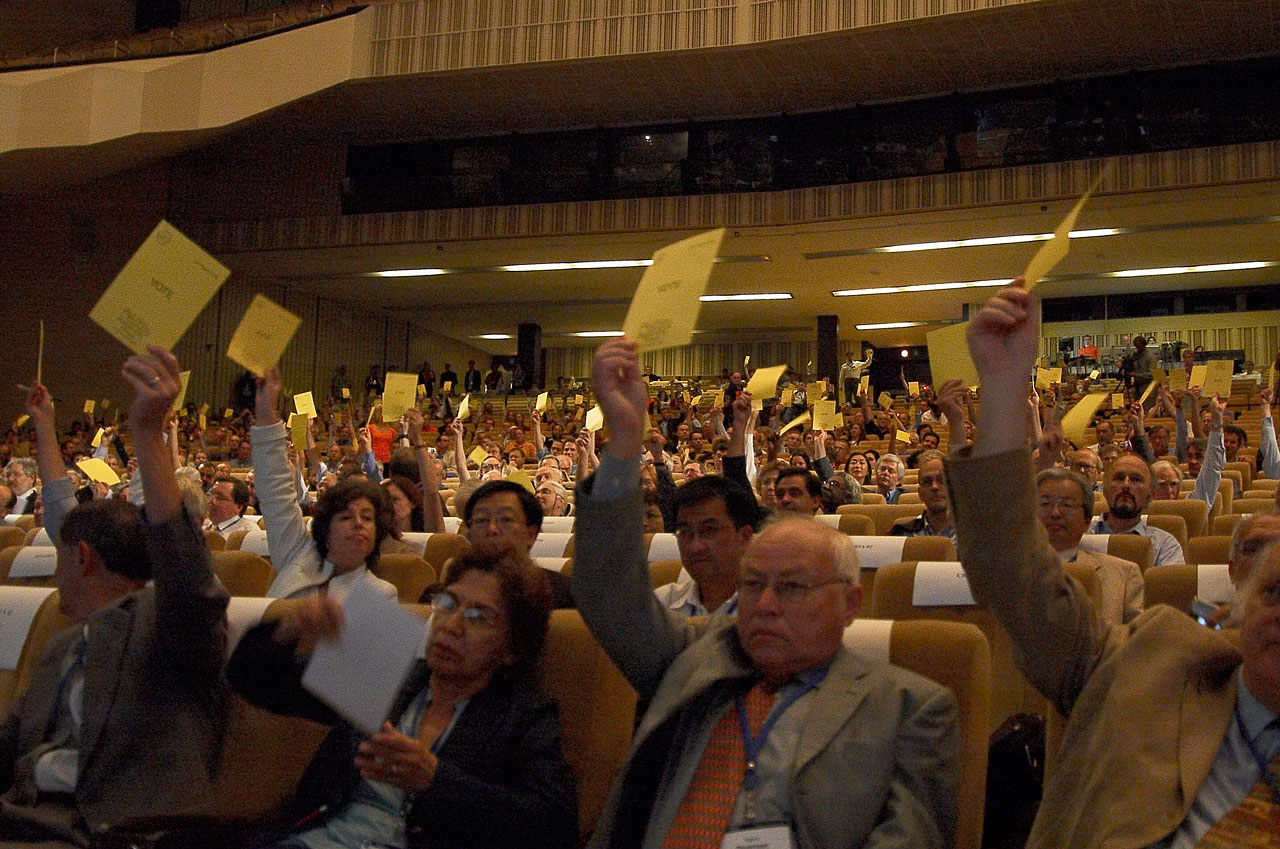 The vote at the General Assembly of the IAU, 2006. Credit IAU

Ron Ekers, who was the President of the IAU 2006-2008, recalls how the IAU recommended that the dwarf planets still be called planets – a recommendation voted against in the moment captured above, during the IAU’s General Assembly in Prague, when attendees voted using yellow cards. “In retrospect, they made the right decision to vote that down.”

(Find out why Ekers thinks the definition of a planet will change in the future).

The role of the IAU

What  led to the formal definition of a planet was part of the IAU’s traditional role. Since its inception, the IAU has been the International arbiter for astronomical nomenclature, so according to Ekers, this was part of its job.

“When people discover new things – and astronomers are doing this all the time – what do they call them? Of course, it doesn’t work very well if each community makes up its own names and has its own naming systems. So one of the IAU’s roles is to get an agreement on nomenclature to keep up communication,” says Ekers, who is now a CSIRO Fellow.

“In order to name things, you have to know what they are. Is it a planet or is it an asteroid? Systems have evolved for giving names, so the planets are named after major Gods. Historically that was the case, and this tradition has been kept,” Ekers says.

When someone discovers something – for example, an asteroid or a crater –  they submit proposed names  to the IAU and in the majority of cases, their proposal gets accepted. As objects larger than Pluto started to be found, the IAU was landed with a tricky question – not to do with physics or the science – but, how are they going to be named?

“Because the definition of planets has never been set down, there wasn’t a process to decide whether these new objects larger than Pluto were planets or not,” says Ekers.

The IAU initially sought the opinion from the experts, by forming an expert committee to debate the issue. But, after a year, the first committee came back without a decision.

When Ekers became president, the IAU had just set up a second expert committee. Six months later, this committee came back without a decision too. Ekers was left with the task of understanding why these expert committees couldn’t make a decision. What he found was that everyone in the committee could agree on the science: that Pluto belongs to the trans-Neptunian objects, that it is dynamically different from the other planets, that it is big enough to have become a spherical object. But the areas of disagreement were sociological.

So, they set up a special committee, representing science in society – as well as planetary scientists there were writers, educators, historians; Ekers described it as “a committee of people who could advise us on how the world would react”. It was this group who came up with a draft definition of a planet that the IAU would vote on.

When the General Assembly in Prague began, astronomers were told the decision would be made during their two-week meeting. This announcement gathered a lot of attention worldwide. “The meeting was huge, absolutely huge. We had more journalists and science writers than had ever come to a general assembly of the IAU before – by order of a thousand,” Ekers said.

In the end, these were the votes:

Resolution 5B – that classical and dwarf planets are all planets. FAILED.

Resolution 6A – that Pluto is the prototype of a new class of objects. PASSED.

Resolution 6B – that the new class are called Plutonians. FAILED.

And with that, Pluto ceased to be a planet, and became the prototype for a new class of unnamed objects. (It wasn’t until June 2008 that the IAU gave the new class of planets a name, Plutoids.)

The IAU’s naming had been followed by millions of people the world over. What is it about Pluto that makes the Plutoid so endearing? Is it because it’s perched at the edge of what most of us can even imagine of our Solar System?  Is it because Pluto represents the underdog, the ‘planet’ that was always different from the rest – the little one, with the wonky orbit and the oversized moon?

Whatever it is, Pluto has scratched out a place in our hearts, as well as in history.

Previous post:
Critter Corner: return of the giant alien spider thing?
Coming up next:
What a great location!