NASA’s New Horizons spacecraft is just 20 days away from its encounter Pluto, and our Canberra Deep Space Communications Complex will be on hand to help.

The final countdown begins! New Horizons is on the home stretch for its ever-so-brief celestial encounter with Pluto, and it’s safe to say we’re getting a little excited. Read on to find out what the spacecraft will be doing once it reaches this distant world. And for more #CSIROSpace news, be sure to fly over to www.csiro.au/en/Research/Astronomy 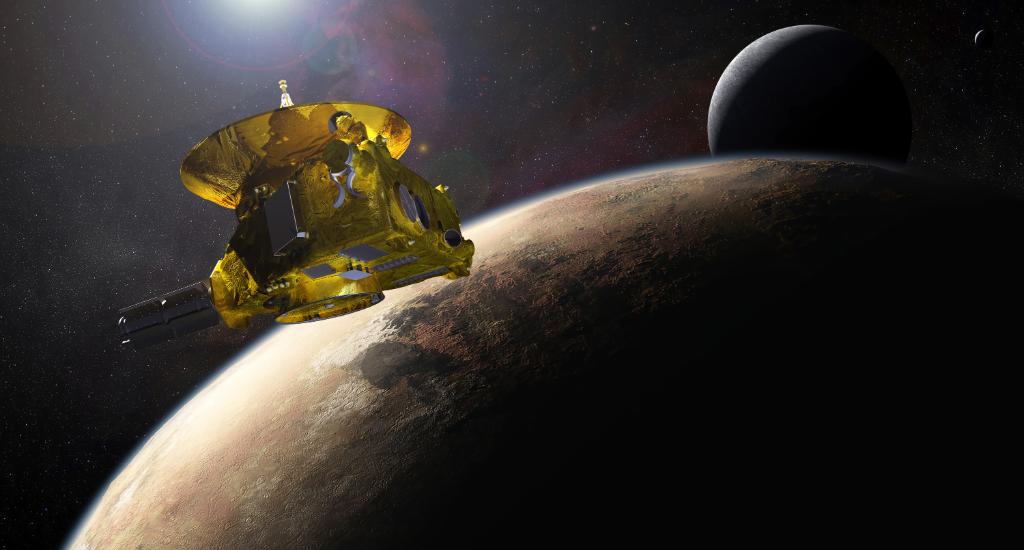 After a voyage of 3,443 days and travelling nearly 5 billion kilometres from home, NASA’s New Horizons spacecraft is now just 20 days away from its historic encounter with the distant world of Pluto.

The science team located at the Applied Physics Laboratory (APL) at the Johns Hopkins University in Baltimore, Maryland and the Southwest Research Institute (SwRI) in San Antonio, Texas have been dreaming of this moment since plans for the mission were first hatched back in 1989.

Key to the success of this mission are the powerful, yet ultra-sensitive communication dishes at the Canberra Deep Space Communication Complex – a part of the Deep Space Network (DSN) – one of three NASA tracking stations located in Australia, Spain and USA.

In Australia, our tracking station is managed on NASA’s behalf by the CSIRO. Operated by an all Australian team of engineers, technicians and spacecraft communication experts, the station is located at Tidbinbilla just outside of Canberra.

Just like their counterparts at APL, SwRI, NASA and the Jet Propulsion Laboratory (JPL), the team at the Canberra Deep Space Communication Complex (CDSCC) are ready for the July 14 encounter with Pluto. CDSCC has been following the entire voyage of New Horizons since its launch on January 19, 2006 and are set to play a key role in the one of the most anticipated planetary encounters in space exploration history. 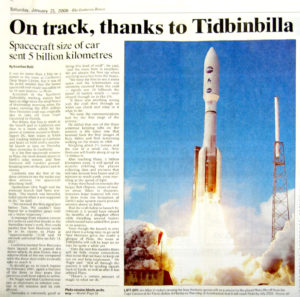 CDSCC has been tracking the New Horizons spacecraft since its launch in January 2006. Image: Canberra Times/Fairfax

To start its prime mission, the New Horizons spacecraft has ventured further than any other mission. It has encountered asteroids, flown past the giant planet Jupiter and braved the cold depths of space, ‘beeping’ home with weekly beacons to confirm that it was still alive and spending time in ‘computer’ hibernation for much of the journey.

Once at Pluto however, it will not have time to rest.

BUSY DAY: The New Horizons spacecraft has a lot of work to complete during its close encounter with Pluto. Image: NASA/Eyes on the Solar System

Not much larger than a grand piano, the New Horizons spacecraft does not have the fuel to slow down and go into orbit around or land on Pluto. Instead, after its nine and a half year journey, it will get less than one day close-up with Pluto, to learn everything it can about the dwarf planet and its family of five known moons.

Rocketing through the Pluto system at over 52,000 kilometres per hour, New Horizons will be using every instrument, sensor and camera it has to intensively study these unexplored worlds.

After such a long journey, the short encounter period places enormous pressure on the science team to ensure that everything goes right with the spacecraft and its instruments. It also heightens the focus of the CSIRO communications team in Canberra who will be working throughout the encounter period to ensure the spacecraft’s radio signal is received on Earth and that none of the valuable data is lost.

The radio signal from the New Horizons spacecraft is incredibly weak by the time it is received on Earth. The 12-15 watt transmission is not a tight beam. As it travels through space, the radio waves spread out, becoming thinner and more diffuse. By the time it has travelled across the 4.8 billion kilometres of void, the spacecraft’s signals – which at the speed of light have taken 4.5 hours to reach us – are received at CDSCC’s antenna dishes at signal strength of 4 x 10-19 watts (that’s 0.00000000000000000004 of a watt!) Literally, a whisper from deep space. 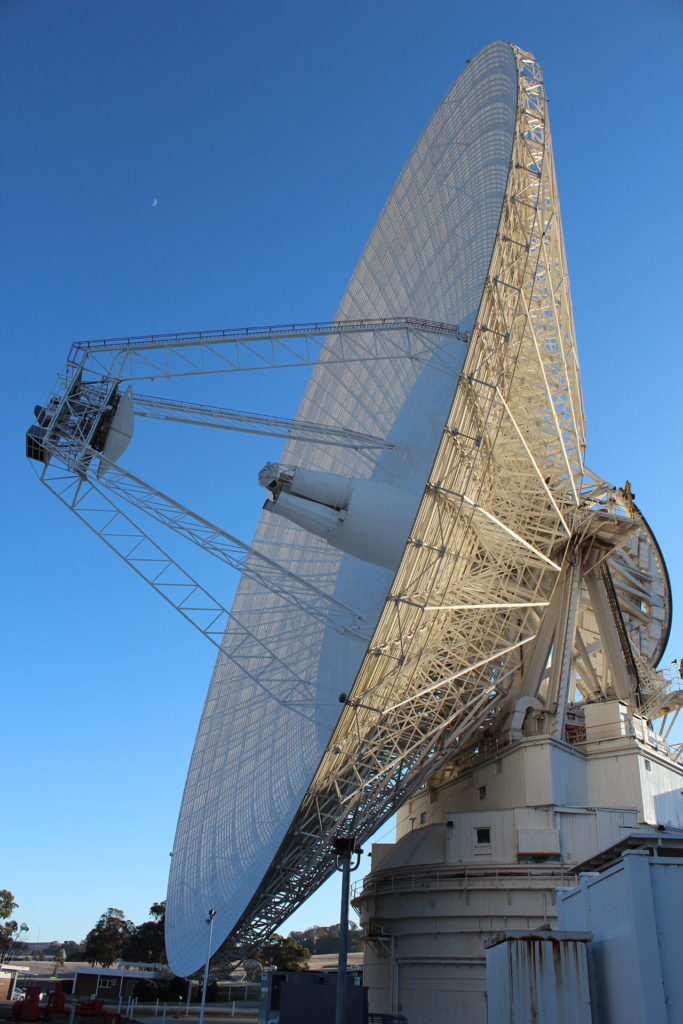 The incredible sensitivity of CDSCC’s big dish, Deep Space Station 43 (DSS43) will be used as the prime antenna to receive these signals and collect from New Horizons some of the first close-up images of the dwarf planet.

CDSCC will also be working side-by-side with its sister stations to complete a critical science experiment at Pluto called REX (Radio science EXperiment). By transmitting a powerful radio signal towards Pluto and having it received on-board the New Horizons’ REX instrument, scientists will be able to determine more about the density and temperature range of Pluto’s tenuous atmosphere, and find out whether its largest moon, Charon also has an atmosphere.

The precise timing of the transmission will coincide with the moment the spacecraft starts passing behind the dwarf planet from Earth’s point of view. Knowing exactly when the signal is received at the spacecraft, lost when it passes behind the dwarf planet and regained again when Earth is in view, will allow scientists to increase our knowledge of the size of Pluto down to an accuracy of just a few metres.

The countdown continues, and Pluto is getting bigger in New Horizons’ cameras every day. Recent pictures received on Earth are already showing a world with wide variation of light and dark features. What these turn out to be is just a small part of the many mysteries that New Horizons hopes to answer.

What will New Horizons find? What questions will be answered and what new mysteries raised? 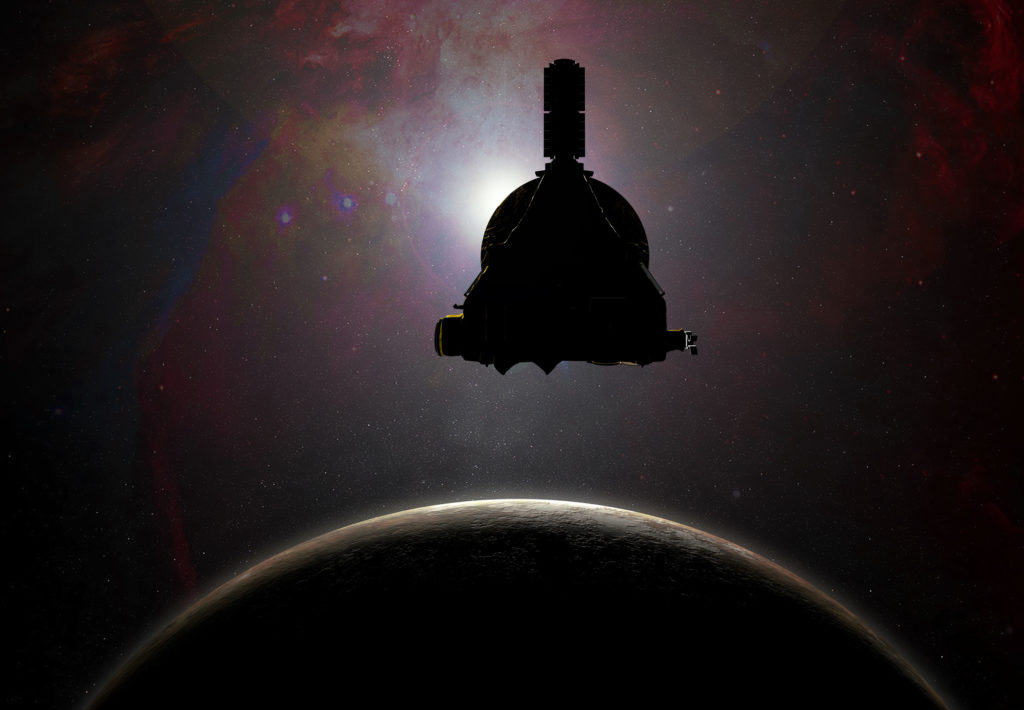 One thing is certain, the CSIRO team at the Canberra Deep Space Communication Complex will be playing its part. Just like the mission scientists who have waited so long for this day, CDSCC is counting the days, hours minutes and seconds remaining until the time of New Horizons’ closest approach to the realm of Pluto and its moons.

T minus 20 days and counting.

For further information:
The New Horizons mission – visit its website or follow on Twitter.
See what the antennas of the Deep Space Network are doing 24/7 via DSN Now.
Follow the New Horizons Pluto encounter with Eyes on the Solar System. 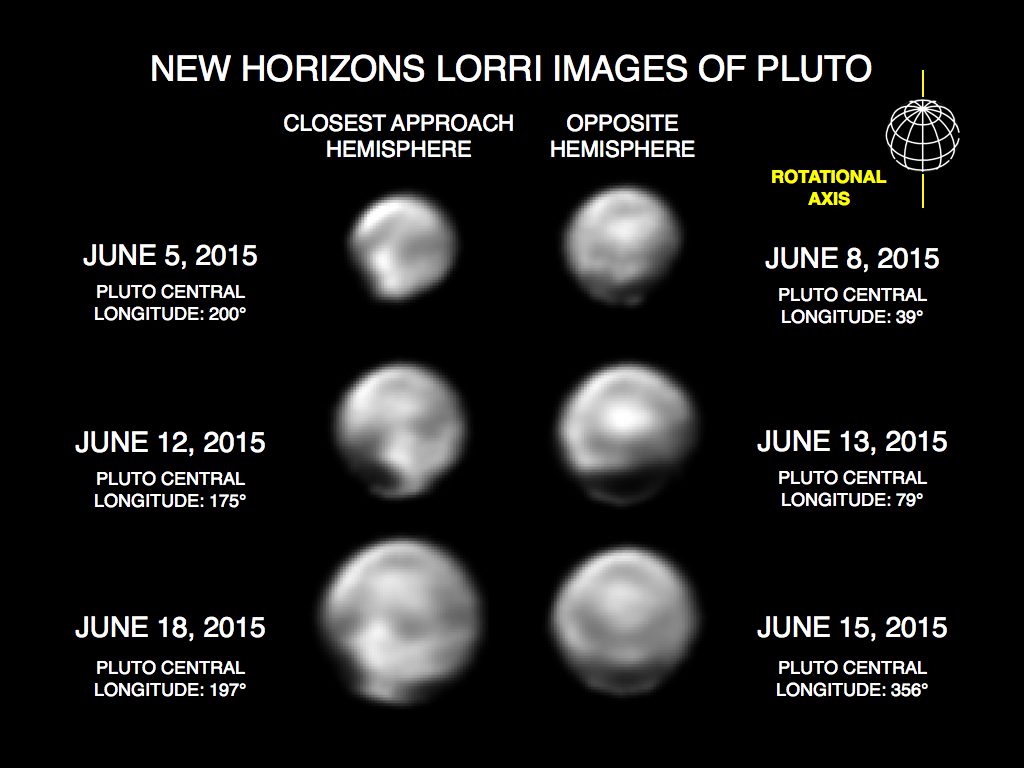