Just like the ever-forking numbers of insect species branching off and evolving, so too, do the techniques of the art world ramify in their attempt to capture the beauty of the natural world. 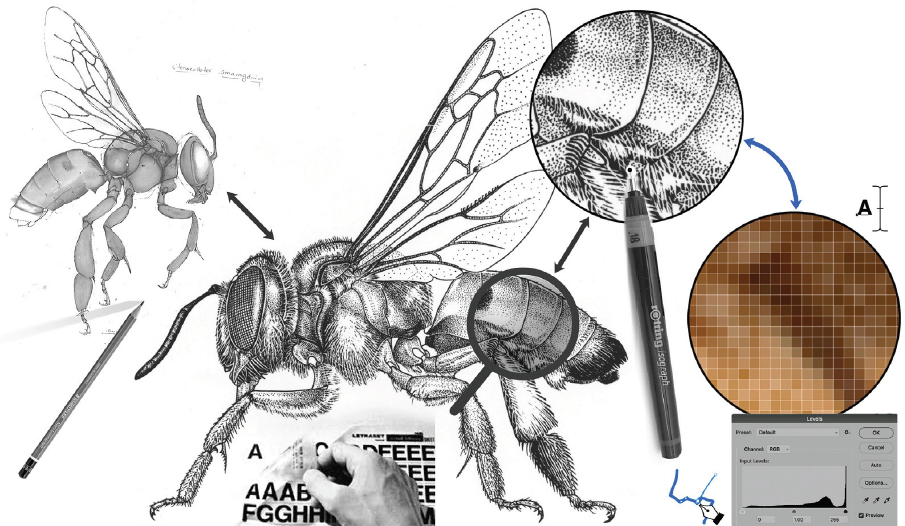 In a black-and-white world, the tools of trade for a scientific illustrator were pencil, pen, Letraset – sticky letters for labeling illustrations, and stippling – a technique used to represent light and shade in an ink drawing. These old methods give way to pixels, full colour, digital controls, Bézier curves and text tools.

When I started here at CSIRO in the early eighties, pen, pencil and ink were the tools of trade for a scientific illustrator. How things have changed!

An illustration began with the specimen under the microscope. A camera lucida attached to the side of the microscope reflected the image of the insect onto a piece of paper. Here the hand of the illustrator holding the pencil could be seen superimposed over the specimen. The insect could then be traced, ensuring complete accuracy. Evidence suggests that Vermeer employed a similar trick for his Dutch Interiors.

Often the legs, wings and body of the insect were twisted and tangled. This required each component to be drawn separately, untangled and re-joined to produce a well conformed drawing.

Pencil drawings were converted to ink using Rotring pens. These pens held a quantity of black ink in the same way a syringe holds fluid. Pens with nibs of specific thickness were available and using these, the outline of the pencil drawing was traced through a transparent medium — either drafting velum, or by employing a light-table. Making a tonal drawing to feature the specimen as a three-dimensional object was easy with pencil but tricky with pen. With pen, you used a technique called stippling — a method that involved building up the tone by making small individual dots of ink at different densities. This was a time-consuming process.

The first technology to produce a change in these methods was a large static camera called a Process Camera; it was about 1900 mm wide, 1400 mm high and 900 mm deep. The camera was housed in a large dark room, along with chemical developers and a clothes line for hanging up the developing images. It produced a hard copy called a bromide. 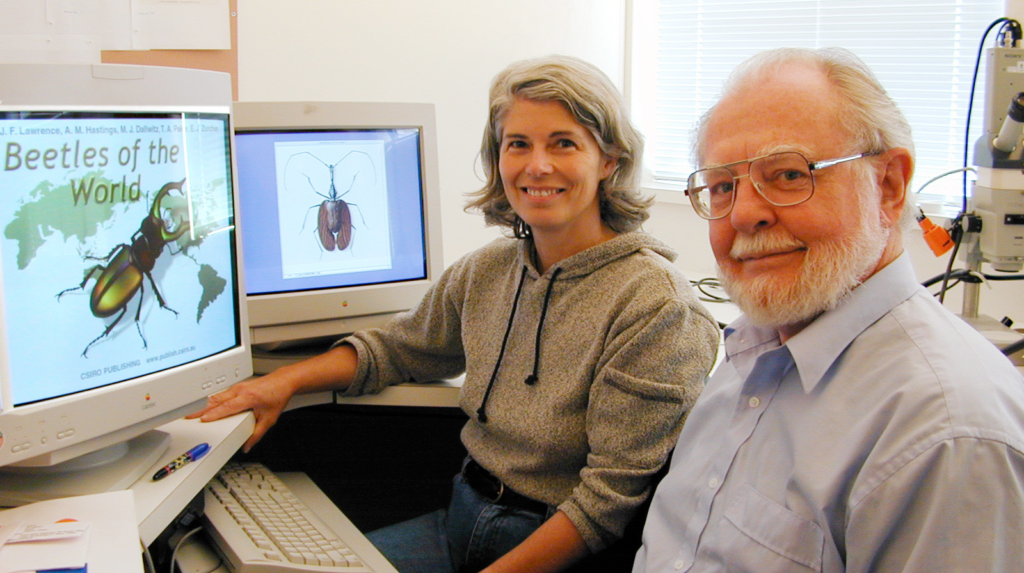 John Lawrence and Anne Hastings preparing ‘Beetles of the World’, to be published on a CD-ROM. This was our second digital product after ‘Beetle Larvae of the World’. Partly visible over John’s shoulder is a video camera, on top of a microscope. We used this camera to create the visual content for the interactive identification key and information system for ‘Beetles of the World’.

Using this camera, a toned pencil drawing was photographed through a fine screen that converted the pencil tones into stipples in the way that black-and-white photographs were prepared for newspaper publication. Although still time consuming, it was an improvement over the time taken to stipple an ink drawing.

Then, in the mid 1980s, computers arrived in our Entomology graphics departments. They brought two new approaches: a pixel-based program called “Digital Darkroom” and a Bézier curve program for drawing mathematically determined curves and lines, thus making them independent of pixels and resolution.

These early programs morphed into the familiar Adobe Photoshop, Adobe Illustrator and Corel Draw. They radically changed my world. We went from black-and-white to full colour, from using the convention of broken inked lines to indicate transparency to having the ability to actually make structures transparent! There was so much to learn and so many new ways of doing things. It was an exciting time for an illustrator.

The next change was replacement of the camera lucida with a video camera mounted on top of the microscope. The resolution was low, but we could take photographs of sections of the subject matter under high magnification and then stitch the images together to make a high-resolution composite.

John Lawrence, Mike Dallwitz, Matt Colloff, Adam Ślipiński and David Yeates were all influential in the transition of scientific illustration to digital media. One of the early products I worked on with John Lawrence and Mike Dallwitz was ‘Beetles of the World’, an interactive key and information system. It was produced as a CD-ROM, a technology now superseded by other digital technologies such as the World Wide Web.
Interactive identification keys and supporting material could go online. HTML and coding languages to control websites and keys became part of the mix of new tools and skills required by an illustrator.

In 2018 there is no sign of developments slowing. Three dimensions seems to be the next frontier. New approaches such as 3-D scanning, 3-D printing, CT scanning and the amazing new software packages required to process this new type of data are developing.

All in all, it has been quite a journey.

Anne's art get you buzzing on our collections? Hop on over and see more.

Previous post:
Protecting the ‘right to be forgotten’ in the age of blockchain
Coming up next:
We asked five experts: are light dairy products better?