The Square Kilometre Array, or SKA, is a next-generation radio telescope that will be vastly more sensitive than the best present-day instruments. It will give astronomers remarkable insights into the formation of the early Universe, including the emergence of the first stars, galaxies and other structures. We caught up with research engineer Mia Baquiran to find out more about this amazing new instrument and her role in getting it off the ground and into the skies. 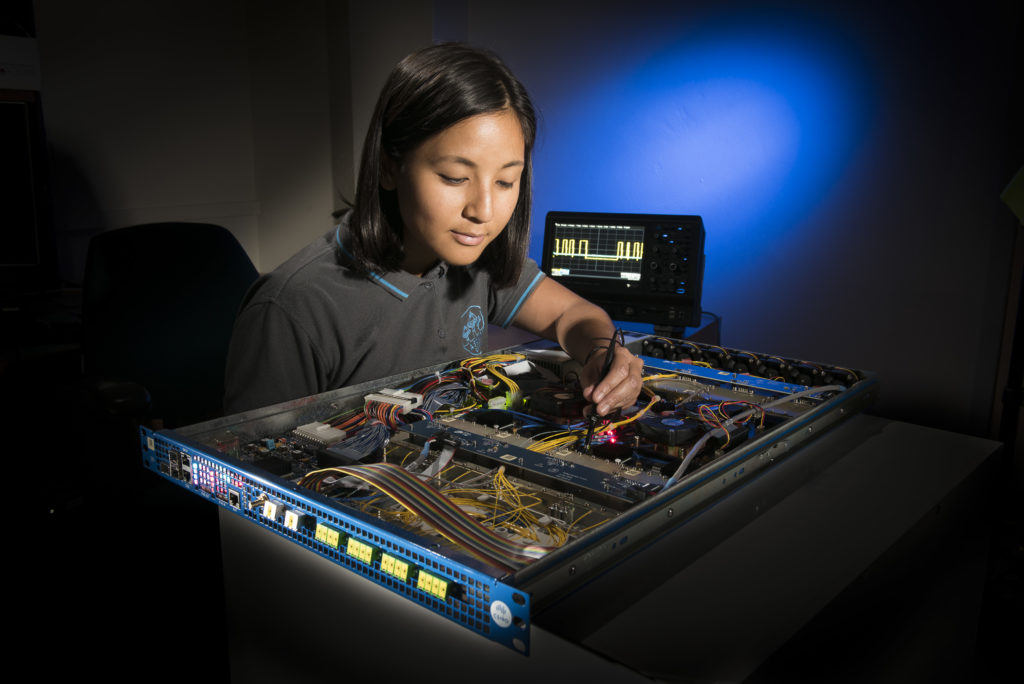 When they flick the switch on the world’s largest telescope, one woman’s work will come to life.

If it takes a village to raise a child, it takes a planet – or at least ten countries – to build the the world’s largest radio telescope, the Square Kilometre Array.

The Square Kilometre Array, or SKA, is a next-generation radio telescope that will be vastly more sensitive than the best present-day instruments. It will give astronomers remarkable insights into the formation of the early Universe, including the emergence of the first stars, galaxies and other structures.

Consisting of thousands of antennas linked together by high bandwidth optical fibre, the SKA will require new technologies and progress in fundamental engineering. The telescope’s design and development is being led by the international SKA Organisation. 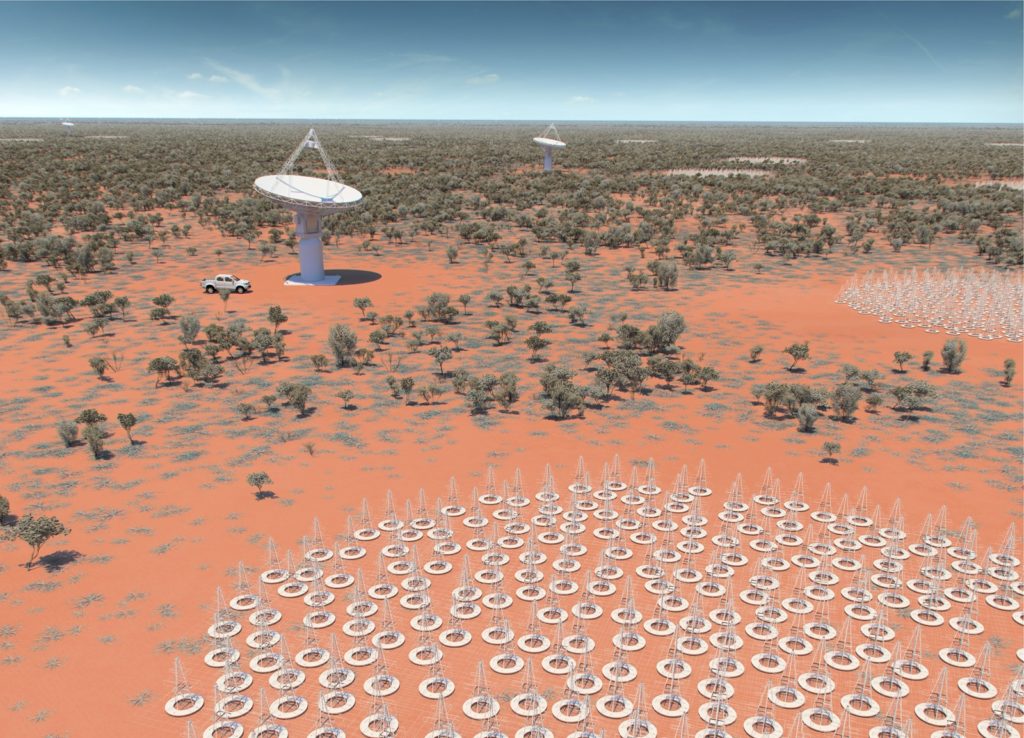 An artist’s impression of the Square Kilometre Array’s antennas in Australia. ©SKA Organisation. We acknowledge the Wajarri Yamaji people as the Traditional Owners of the Murchison Radio-astronomy Observatory site.

Construction is due to start in 2018 and around the globe 11 groups, all with members from several countries, are working feverishly on different aspects of the project to make it come together.

Australia has a presence in several of these groups, and indeed leads two of them. Our very own Mia Baquiran is one of the researchers working on this exciting project.

She spends her days in a quiet, ground-floor office in a leafy suburb of Sydney, working on systems that will go into the international SKA radio telescope.

Mia’s role in this ‘moon-shot’ project concerns a telescope called ‘SKA Low’, an assembly of more than a hundred thousand low-frequency antennas that will be housed at CSIRO’s Murchison Radio-astronomy Observatory in Western Australia.

SKA Low has no moving parts but it is still a complex beast. The signals from the antennas have to be brought together and compared with each other (‘correlated’) to create a view of the sky. 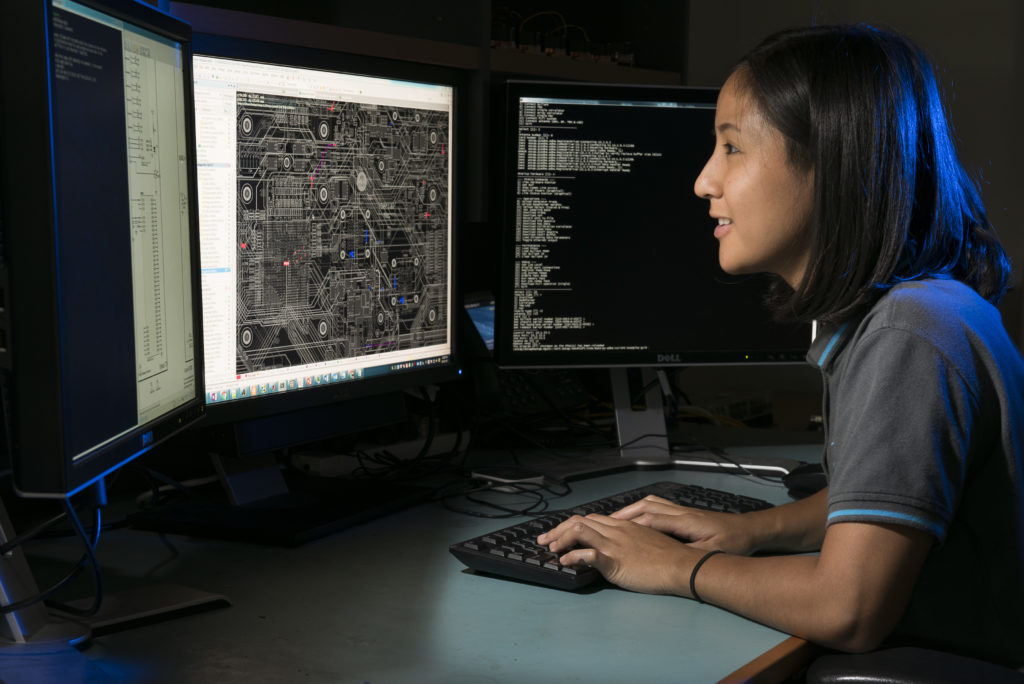 Our research engineer Mia Baquiran is working on the software that will create a view of the sky using the SKA Low radio telescope.

So how did she get into this space you might ask?

“When I was thinking about what I wanted to do at university I didn’t have that much direction,” Mia said. “Really the only thing that got me excited was the concept of engineering, being able to develop things and understanding how things work.”

She was always interested in physics and robotics appealed too, so she headed for a degree in mechatronics, a field that brings together mechanical engineering, electronics and software.

After finishing her studies at UNSW in 2012 she worked at a small software company, then joined our astronomy and space science research area.

She’s also curiosity-driven. “I like the idea that I can learn something new every day,” she said. “Engineering is constantly changing, so you have to become a lifelong learner.”

“I do enjoy the opportunity to learn from people who are more experienced than me, and that’s definitely well-facilitated in CSIRO.”

Because the correlator and beamformer project is international Mia has had the opportunity to visit the Netherlands to work with colleagues there.

The SKA will give radio astronomers a view of the past a million years after the Big Bang, when the universe first evolved to what is referred to as the “cosmic dawn”.

But what’s in store for Mia in her future?

“I’d like to continue in electronics and FPGA (field programmable gate array) design,” she said.

“Ideally I’d like to continue in radio astronomy, because we’re in a special position being in Australia, where it’s one of the fields that we’re world leaders in.”

Find out more about how CSIRO is helping to bring the Square Kilometre Array to life.