Moon kite missing in the Simpson

Moon kite missing in the Simpson

The world's only raptor that hunts at night has watched on as 32 species became extinct - the highest extinction rate in the world. Now, it too is under threat. 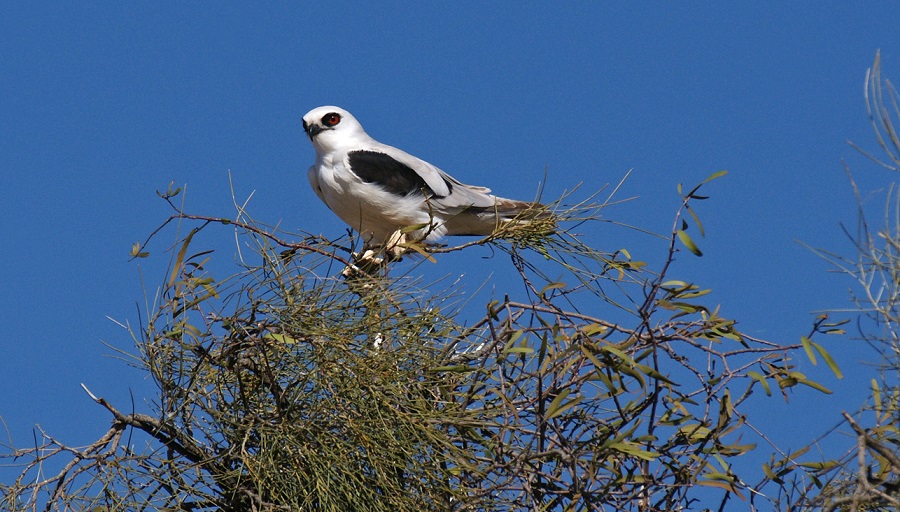 A Letter-winged kite in a tree

Population numbers of the letter-winged kite, also known as the moon kite, aren’t what they used to be. Image Peter Nunn-Ninox photograph

The letter-winged kite has watched on as Australia’s arid zone lost 32 native mammal species in a couple of centuries.

Now, this unique animal is also under threat.

Those lost species—many of them once prey to the letter-winged kite—represent 42 per cent of the mammal fauna at the time of European settlement, an extinction rate unmatched anywhere else in the world.

Here in the Simpson Desert, from the heights of the rare Acacia peuce, this raptor holds its own place in the evolutionary tree as the only bird among its order of eagles, hawks, falcons and others, which hunts by night.

“We refer to it rather romantically as the moon kite. It generally hunts most effectively on nights when the moon is bright.”

It’s here that Pavey has spent 15 years studying the Elanus scriptus, at what he calls the frontier of Australian conservation.

“They’re beautiful against a bright blue sky. They’re an enigma. They’re not there and then all of a sudden when rodent numbers build up they appear. At our study site in the Simpson over 15 years they’ve only turned up three times.”

Pavey says that although numbers have declined over the decades it was only last year that there was a consensus about the plight of this bird.

“It has now entered the conservation conscience,” Pavey says.

At the mercy of the boom-bust cycle 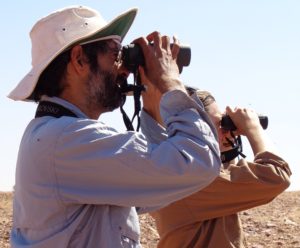 Moon kites are an ‘irruptive species’, also known as a ‘boom-bust’ species. They are believed to retreat to refuge areas in south-western Queensland in drought and then every 5-10 years when good rains arrive and their food sources dramatically multiply, they cover a vast area of the Australian arid zone.

“When times are good they breed almost constantly, the young breed at an early stage. They’ll be eating all the rats and mice and, as things dry up and the rodents disappear, the kites disappear. They’ll be gone seemingly without a trace, which isn’t unusual in the desert. It makes it very hard to monitor from a conservation perspective,” explains Pavey.

The last State of the Environment report, released in 2011 when the big rains had broken the Millennium Drought, predicted that many species, like the moon kite, would return.

The letter winged-kite is an apex predator in the trophic ecology of central Australia, but it now flies over a changed food web where foxes and cats are taking out many native small mammals. The fox and cat are also predators of the letter-winged kite.

“If you look at the climate modelling in the arid zone there’s a universal agreement: We know the temperatures will increase and we know there’s going to be an increase in extreme events, big rain events and then droughts,” says Pavey.

“The increase in extreme events is going to work in favour of cats and foxes, especially in this particular system. That might mean the prey of the letter-winged kite will be under increased predation pressure.”

The other part of the story is the letter-winged kite needs places to nest above ground. 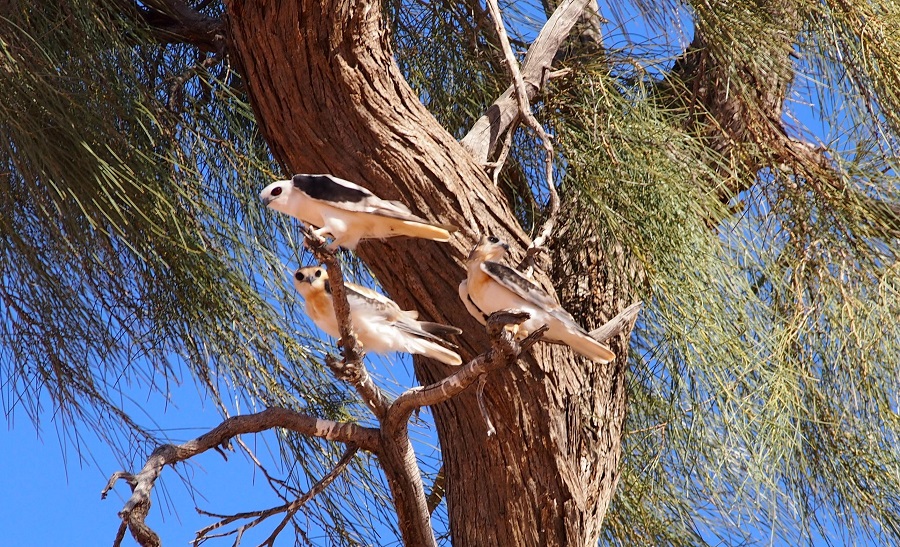 Three moon kites in a tree

Finding the right tree for nesting is essential.

In the Simpson there is the Acacia peuce, known as the ‘Akerre’ by the Southern Arrente people. To scientists, it’s known as a keystone species because of its important role as a nesting site. And to some, it’s been described as the loneliest tree in Australia.

But even the grand Acacia peuce, which can remarkably grow up to 18m tall, cannot always provide protection from cats and is also under threat.

Much of the letter-winged kites’ breeding zone and a significant proportion of threatened fauna in the Australian arid zone exist on pastoral leases rather than the formal reserve system.

Working to protect the refuges

Pavey has been working on a number of projects.

One is to monitor population cycles of species of threatened and near threatened rodents and dasyurid marsupials, and to understand the species interactions within this system. In particular, Pavey is looking into the trophic ecology of key species and how this changes between “boom” and “bust” periods.

Another project is to develop approaches to manage threatened species outside of the reserve system on pastoral land. This approach focuses on the refuges of small mammals such as the plains mouse and aims to carry out targeted management of predators and other threats.

“We’re advocating a local-scale, targeted management of these refuges. We are talking about low-tech approaches that are easy to implement; baiting foxes, shooting and trapping cats and foxes. By focussing in on the refuges the idea is to target the areas that are most important for biodiversity rather than being overwhelmed by the vastness of the landscape. “

Pavey believes that pastoralists are well placed to be effective biodiversity managers and to protect refuges.

“There’s a lot of ecological knowledge among pastoralists that is completely under appreciated.”

This blog was initially written for Ecos. Read the full length blog here.

You can also read highlights from the Biodiversity chapter from the 2016 State of the Environment Report.