Not so chirpy: How ‘We Feel’ revealed by tweets

Not so chirpy: How ‘We Feel’ revealed by tweets

That little blue bird in the Twitter logo is always so damn chirpy! But not all our tweets come from a happy state of mind.

With over 9000 tweets posted every second, it’s clear that Twitter has become a popular place to express our feelings in 140 characters or less – from fear, joy and sadness, to anger, surprise and of course, hunger.

But what if we could use this information to help those who aren’t feeling so chirpy? We’ve teamed up with the Black Dog Institute and Amazon to do just that. Our new research project, called ‘We Feel’, will monitor and analyse public tweets to see when (collectively) people are feeling down and so help mental health support organisations be better prepared.

For this project, we’re drawing on our expertise in natural language processing, big data mining and social media analysis to present data in a way that’s usable by mental health experts.

‘We Feel’ started out by creating an emotional word map. We asked a bunch of people to look at a set of 600 emotion words used in tweets and link them to particular feelings. The emotions are based on US Psychology Professor W. Gerrod Parrott’s standard list of basic emotions including love, joy, surprise, anger, sadness and fear. They were divided further into specific secondary emotions which were then mapped to words used in tweets. For example, the word ‘hurt’ might suggest a feeling of sadness; or ‘nice’ in a tweet might reveal contentment.

This word map combined with data analysis software and techniques can be used to process the stream of thousands of tweets sent into the public domain every second and create a graph of a particular emotion. Here’s ‘fear’ as the Federal Budget was announced last week.

Graph from 'We Feel' project

As Budget night unfolds, ‘We Feel’ shows Tweets revealing ‘fear’ growing in number as a thickening band in purple and pink from left to right. Click to view full size.

Contrast that fear with the joy of Eurovision the previous weekend. The winner, Austria’s Conchita Wurst, was certainly ecstatic. And millions of Eurovision fans on couches around the world were tweeting almost simultaneously, giving the Eurovision hashtag a work out. ‘We Feel’ revealed spikes of words like ‘amazing’, ‘surprising’, ‘funny’ and ‘weird’ on Twitter in Europe at the time.

Crunching even a small proportion of twitter data like this as-it-happens is a huge task. That’s where Amazon came in with their cloud service Kinesis. It enabled our software to process the data efficiently as it rushed down the pipe. The user interface for ‘We Feel’ is freely available to other developers and researchers so they can use the data too.

As well as providing real time population data, this tool will also help uncover where people are most at risk of poor mental health and how the mood and emotions of an area or region can change over time. We Feel will also help to understand how strongly our emotions are related to social, economic and environmental factors such as the weather, time of day, day of the week, news of a major disaster or economic downturn. This is all very important to health services who could use it to both monitor community mental health and predict where/when more services are needed. 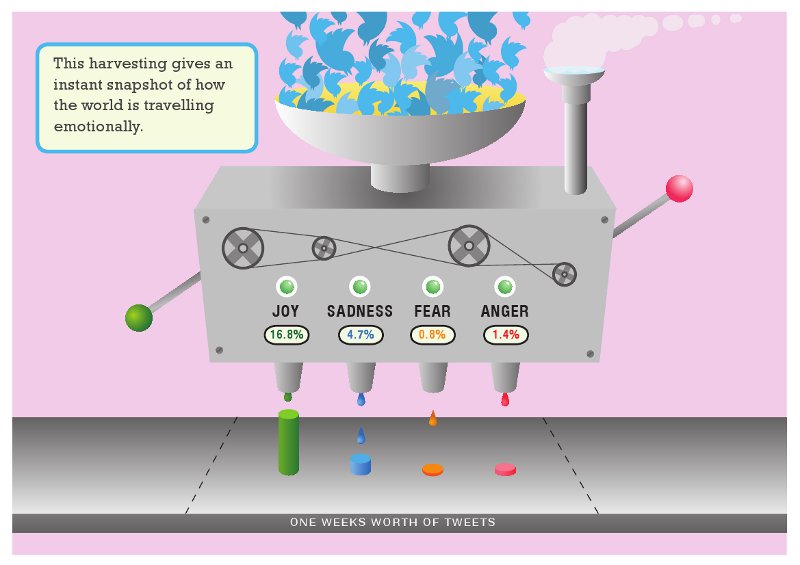 ‘We Feel’ harvests emotional tweets from around the world.

Using social media data to support those with mental health issues – now that’s something we should all feel chirpy about!

Read more about this at: Twitter tool shows a real-time view of our emotions