Not just one of the flock

Not just one of the flock

Mapping the ancestry of sheep over the past 11,000 years has revealed that our woolly friends are stars among domestic animals, boasting vast genetic diversity and substantial prospects for continued breeding to further boost wool and food production for a rising world population. 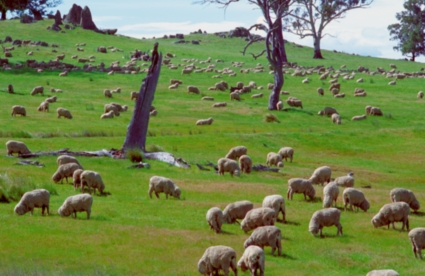 An international research team has provided an unprecedented in-depth view of the genetic history of sheep, one of the world’s most important livestock species. The study, published in the online, open-access journal PLoS Biology, maps out how humans have bred sheep to suit diverse environments and to enhance the specialised production of meat, wool and milk.

The study identified particular regions of the sheep genome that appear to have changed rapidly in response to selection for genes controlling traits such as coat colour, body size, reproduction and, especially, the lack of horns – one of the earliest goals of selective breeding.

Detailing sheep domestication and migration patterns across the globe, it also supports and adds to the current knowledge of human movements throughout history.

The team traced the relatedness between nearly 3000 sheep by comparing 50,000 DNA sites across the genome, and pinpointed the genetic consequences of domestication and subsequent division of sheep into hundreds of breeds, according to lead author Dr James Kijas from Australia’s national science agency, CSIRO.

“Our detailed gene map is telling us that sheep breeds have been formed in a ‘fluid’ way that makes them different from other species of domestic animals. Frequent mating and strong gene flow between animals of different breeds has ensured that most modern sheep breeds have maintained high levels of genetic diversity, in contrast to some breeds of dogs and cattle that generally have higher levels of inbreeding,” Dr Kijas says.

“This high level of genetic diversity means that sheep breeders can continue to expect strong improvements in important production traits – improvements that could play a part in feeding the growing number of people in the world, with an increasing demand for animal protein.”

“The technology that we have used in this study is helping to identify genes that control economically important traits, and to track down genetic variants that cause diseases. This may ultimately help producers to intensify or remove certain traits through targeted breeding practices.”

The extensive DNA sampling that underpins the research, encompassing 74 sheep breeds from around the world, will provide a touchstone for livestock research for years to come, including studies of genetic diversity to better manage the conservation of threatened breeds.