No sh*t – a new test for bowel cancer

No sh*t – a new test for bowel cancer

We have been working on a more effective and reliable blood-based test for bowel cancer.

Bowel cancer affects 1 in 12 Australians and is the second largest cause of cancer deaths in Australia.

We have been working in the area of colon cancer prevention and detection for some time, and the announcement this week of a major step towards a more effective and reliable blood-based test for bowel cancer is delivering on this major research effort.

The test is the result of a five-year scientific collaboration between CSIRO, Australian biotech company Clinical Genomics and Flinders University in Adelaide. Such a test has been the goal for many scientists working in molecular diagnostics around the world, and this development is a major step forward.

Australia has one of the highest rates of bowel cancer in the world. It’s the second most common type of cancer diagnosed in Australia and is Australia’s second biggest cancer killer after lung cancer. More than 14,000 Australians are told they have bowel cancer every year and 4,000 die from it every year.

If you find these figures hard to digest, Bowel Cancer Australia has developed an interactive cancer map to bring it all closer to home. It’s a bit macabre, but you can zoom in to find out exactly how many people in your suburb are struck down by bowel cancer. 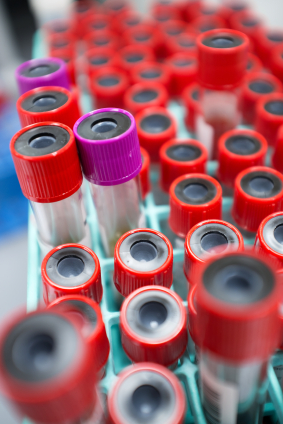 Sampling blood, over the current test, may increase the rate of screening in Australia.

The fight against bowel cancer is so mainstream that even Lara Bingle has put her name behind an awareness campaign. Others are also working hard to raise awareness, with the Bowel Cancer Movement flash choir a notable attempt at raising public attention of the disease.

The good news is that bowel cancer is one of the most curable types of cancer if detected early, but fewer than 40% of bowel cancers are detected early. That’s why the team is so keen to find better ways to diagnose this cancer.

Working with our collaborators, we have now identified a two gene combination called ‘Gemini’ which can detect bowel cancer 76 per cent of the time with an accuracy of 93 per cent in normal patients. The two genes, BCAT1 and IKZF1, were discovered and validated in cancer tissue specimens before research moved to blood testing late last year.

While the initial study reported on a group of 251 patients, a larger study of more than 2,500 patients is now underway and will be complete in early 2013.

Our Dr Peter Molloy explains a bit about this research project and why it means so much to this team of researchers.

He said the test could potentially save thousands of lives and improve five-year survival rates which languish at 66 per cent for bowel cancer. However, until a new blood based test is widely available, FOBT remains a proven, simple and effective screening tool for bowel cancer.

We have been researching colorectal cancer and gut health for a number of years to develop better diagnostics for colorectal cancer, investigate foods that are protective, and find ways to improve gut health. A while back, we even invented a colonoscopy simulator to help teach medical practitioners how to diagnose the disease more effectively.

If you’re really keen to get behind the push to promote public awareness of bowel cancer, you might like to consider joining the aptly named Bowel Movement.

Previous post:
Game on: top athletes to be tracked by our tech
Coming up next:
Work on the back deck sections moving along