While many of us took refuge from the heatwave in air conditioning, one of our summer vacation students ventured outside to test a hot question: Can you fry an egg on the footpath?

Check it out here:

And the result? Well, we won’t be having the result on toast anytime soon.

Eggs typically require temperatures of around 60°C – 70°C to start firming as the proteins in the egg must modify and coagulate in order to cook. In Katie’s experiment, the light colour of the concrete surface reflected more light than the other surfaces and was a poor conductor of heat, therefore having less energy to cook the egg.

The dark coloured barbecue plate was able to cook more than the concrete as it absorbed more light and had a higher thermal conductivity. The egg started turning white as the temperature of the surface was above 60°C.

The best result was in the funnel cooker. The reflective sides of the funnel cooker concentrate a lot of the sun’s rays and can get up to 140°C – 150°C. Our funnel cooker wasn’t quite that warm, but it was close to 60°C as the egg started cooking and turning white. Eggs cooked using solar energy in experiments may not be safe to eat as the yolk may not have reached safe cooking temperatures. 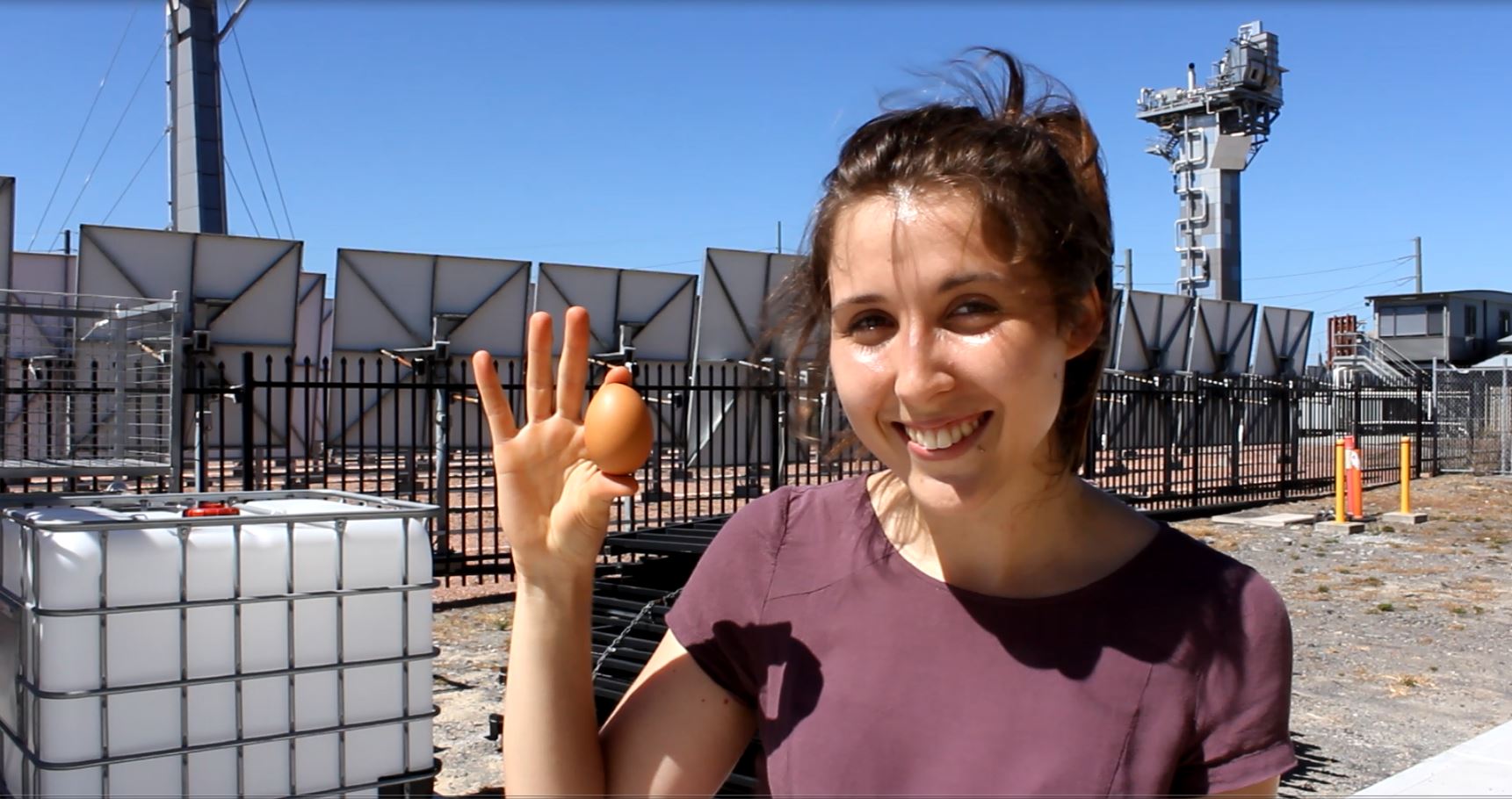 Katie Purnell ready to experiment with her egg.

It was only 30°C in Newcastle this week when we eggs-perimented, so to those looking to replicate our short study on the toasty sidewalks of Adelaide or Melbourne – do let us know your results.

Myth busting is just one of the things Katie is getting up to during her summer vacation scholarship with us. Katie is studying renewable energy engineering at the University of New South Wales and is spending her summer with our Energy Flagship in Newcastle. Katie’s looking into the technical and commercial feasibility of using solar thermal energy to cook in Australia (yes, it’s not just cooking eggs).

“I’m looking at collector, storage and heat transfer methods that can store the energy from the sun to enable cooking at night, which performs comparatively to conventional cooking method,” said Katie.

Katie is also working on delivering the same level of performance that consumers are used to, including the ability to bake, steam and fry in a reasonable cooking time with conventional cooking devices. “If any of the systems are able to be deployed widely they could have huge impacts. House hold energy bills could be reduced over time as well as reducing the negative impacts of fossil fuels,” she said.

Although the project is far from finished, Katie’s research has noted that conventional ovens are often less than 30% efficient and have not improved significantly in the past 15 years, increasing the demand for solar cooking. Katie believes that if the storage of energy from the sun in large quantities becomes successful and as we have a greater understanding of solar intermittency, the future of Australian cooking habits will drastically change for the better.