Invisible structures shaped like noodles, lasagne sheets or hazelnuts could be floating around in our Galaxy radically challenging our understanding of gas conditions in the Milky Way.

A plethora of missing matter problems besieges astronomy. Most famously, dark matter, which was postulated to solve the problem of why galaxies spin so fast (among other things), is thought to comprise some 23% of the mass-energy of the universe.

It is yet to be detected by direct means and remains one of the most significant puzzles in modern astronomy and physics.

Even putting aside dark matter, astronomers are still unable to account for roughly 5% of the universe thought to be made of normal matter, known as baryons. This question, known as the missing baryon problem is of particular interest here.

Where is all the stuff?

Well, we may have found at least some of those baryons, with the details on how published in Science today. But first, a bit of history.

A wine glass in the sky

In 1987, astronomers found the radio waves from a quasar that was normally reasonably constant, varying wildly for a period of a few months. They immediately concluded that the cause of the variation was not the quasar itself, but refraction through a blob of plasma in our own Milky Way.

You can imagine the blob as a wine glass, sitting on a table during a sunny day. The light from the sun shines through the glass, and makes a pattern on the table. 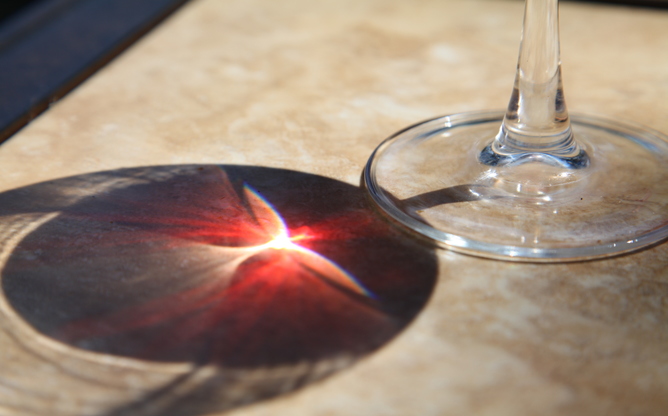 Note the differing colours from the light through the wineglass. Image credit – Anataman, Flickr.

That pattern is the light from the sun being focused and defocused by refraction through the wine glass. As you move though the pattern, you see the sun as brighter or fainter, depending on whether you’re closer, or further from the focus of the glass.

That’s exactly what we have with these blobs, but scaled up to cosmic scales. The radio waves from the quasar shine through the blobs, which act as an interstellar lens and which then makes a pattern in space. As the Earth moves through the pattern, the quasar appears brighter or fainter.

What shape are the blobs?

Now here’s where it gets interesting. If one assumes the lenses are spherical balls of plasma (think meatball), one can calculate that the cloud is so highly over-pressured, it should quickly disperse.

How, then, are the clouds held together long enough for us to see them? A sheet of plasma (like lasagne) viewed edge-on solves this problem, by spreading the plasma out over a large distance.

Another, intriguing proposal, is that the lenses are cold clouds surrounded by a shell of plasma (like a hazelnut). If these cold clouds are held together by their own gravity, then they must be pretty massive. If this is the case, then these cold clouds could represent a substantial fraction of the missing baryons in our galaxy.

Before our work, only a handful of events had been discovered with old telescopes, and mostly on an ad-hoc basis using archival data obtained for other purposes. The traditional approach, called the light curve method, looked at the brightness of a few hundred quasars roughly every day at one or two different radio frequencies.

But, there’s a better way. Let’s get back to the wine glass. If you look closely at the pattern on the table, you’ll see that the white light from the sun is also split into different colours by the glass: which means that some parts of the pattern will have a redder tinge, and some a bluer tinge. 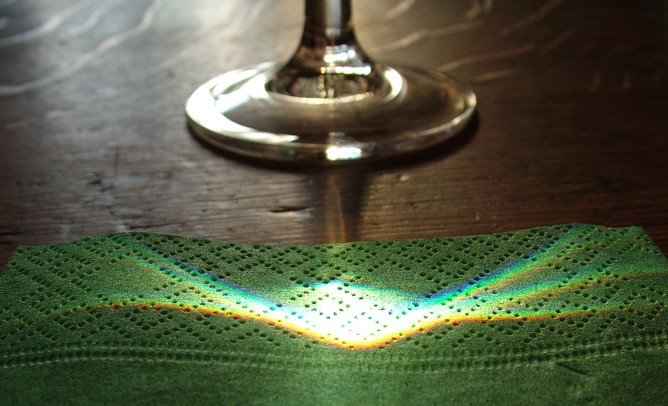 Note the differing colours from the light through the wineglass. Image credit – Anataman, Flickr.

If we’re in a certain part of the pattern, instead of seeing white light coming from the quasar, we see some colours more strongly focused than others. All we needed was a telescope that could tune not to a single radio station at a time, but all the radio stations at the same time.

Fortunately, we have this wonderful machine: the Australia Telescope Compact Array, at Narrabri in rural New South Wales. With the the Compact Array, we don’t get just two channels for every measurement, we get 9,000 channels.

When we found our event, we were super excited. Not only had our idea worked, but it felt like we’d seen colour TV for the first time, after living with black and white for more than 20 years!

We also knew the game was on and we had to act fast. So we pointed a few other telescopes to see what we could see. First, we got the Gemini 8m telescope in Chile, and a 1.3m telescope, also in Chile, to monitor the brightness of the quasar in optical light.

We didn’t expect the plasma to do anything to optical light, but we thought there might be dust in the lens that might tell us what it’s made of. We didn’t see any dust, which is also interesting from the dark matter standpoint: previous surveys for Massive Compact Halo Objects (MACHOs) in the optical never saw any dusty lenses either.

The second pair of telescopes were radio telescopes, but spaced all over Australia, and the US. These telescopes use a technique called Very Long Baseline Interferometry (VLBI) to make the most detailed possible images of the sky (even better than the Hubble Space Telescope).

We expected to see the quasar wavering around (look at a light globe through a wine glass and you’ll see what I mean), but we didn’t see as much as we’d hoped.

What does it all mean? Well, some clever modelling by my colleagues Artem Tuntsov and Mark Walker, at Manly Astrophysics, showed that the lens was either flat, like a sheet of lasagne, or hollow, like a hazelnut or noodle. It definitely wasn’t a bent sheet, and definitely not filled in the middle, like a meatball.

But is it the missing baryons? Well, it’s too early to tell. Pinning down the geometry using the VLBI is the Holy Grail right now.

The future of this work lies in CSIRO’s Australian Square Kilometre Array Pathfinder (ASKAP), which will detect tens of lenses per year. With those lenses, we’ll be busy measuring shapes and chemical compositions. A large number of detections will yield the first in-depth study of the distribution of lenses over the sky.

Such measurements represent a huge leap in our understanding these lenses, a better understanding of the gas conditions in the interstellar medium, and maybe even a solution to the missing baryon problem.

Previous post:
It’s official: 2015 was the hottest year ever recorded
Coming up next:
Legends of rock: CSIRO geologists making a name for themselves