It’s been a big year in space for Australia! In 2019, we’ll be building on our experience to manage ESA’s New Norcia ground station in Western Australia – a first for an Australian organisation. 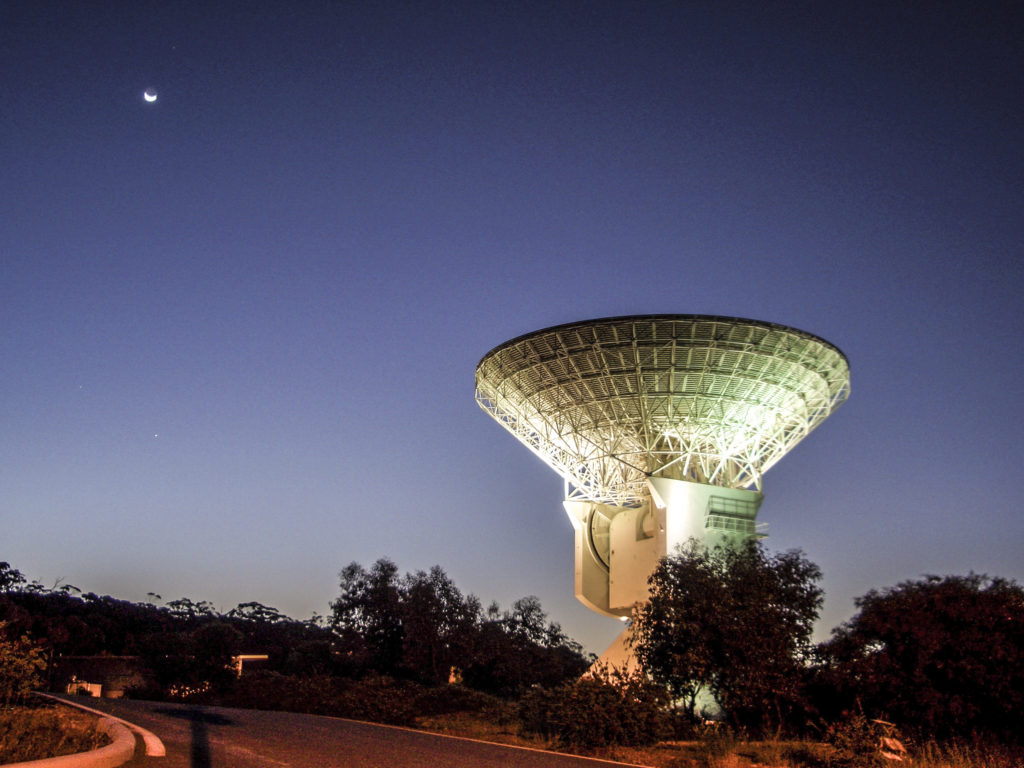 This year has certainly been a big one for Australia in space: from the creation of the Australian Space Agency to receiving historic data from NASA’s Voyager 2 probe as it entered interstellar space. In 2019, our role in space will get bigger as we support the European Space Agency’s New Norcia station in Western Australia – a first for an Australian organisation.

Among the highlights of 2018 was the launch of a new mission to Mercury called BepiColombo. A joint project by the European Space Agency (ESA) and Japanese Aerospace Exploration Agency, the spacecraft was launched in October on its journey to the closest planet to our Sun. Arriving in 2025, it will experience temperatures exceeding 350⁰C and collect data about the composition, geophysics, atmosphere, magnetosphere and history of Mercury.

As it started on its long journey, a network of ground stations around the world was following BepiColombo’s every moment. Run by ESA, the Estrack network includes three deep space tracking stations – in Spain, Argentina and Australia – which are controlled by a command centre in Darmstadt Germany.

The Australian station, at New Norcia about 130 km north-earth of Perth in Western Australia, received the first signals that BepiColombo was safely on its way. New Norcia and the other Estrack stations will continue to track BepiColombo’s location, send commands to control the spacecraft, and receive the data it collects throughout its mission.

From June 2019 we’ll be taking on the maintenance and operational support for the New Norcia station on ESA’s behalf. Since 1979, Australia and ESA have had treaties in place to enable ESA ground stations on Australian soil to track spacecraft and interplanetary missions. The facility at New Norcia has been in operation since 2003, but this is the first time that an Australian organisation has been selected to support day-to-day operations at the station.

Why is Australia the perfect location for a ground station?

To ensure continuous contact with spacecraft, it’s ideal to have three stations spread at equal intervals around the Earth so no matter where a spacecraft is, one of the stations can communicate with them. This is where Australia has a longitudinal advantage, since we fall into a zone that provides complementary coverage to stations located in Europe and the Americas.

And Australia’s relatively low population densities – especially away from large centres – means that minimal radio-frequency ‘noise pollution’ makes it much easier to detect faint radio signals from space, including those used to communicate with spacecraft.

We’ll be bringing to New Norcia our experience operating the Canberra Deep Space Communication Complex for NASA, the famous Parkes radio telescope, and the Murchison Radio-astronomy Observatory in Western Australia that will be home to the international Square Kilometre Array project in Australia.

Taking on operational support for ESA’s New Norcia station demonstrates that Australia has the home-grown capabilities to continue to build our local space industry while working closely with international space agencies.

Along with BepiColombo, one of the other highlights of 2018 has been the momentum generated by the local space sector, which is focused on supporting the new Australian Space Agency to triple the size of the sector to $12bn by 2030 and creating new jobs and business opportunities for Australians.

So as 2018 draws to a close and we prepare to take on exciting new challenges in 2019, we’ll continue to support the growth of Australia’s space industry and drive innovation through global partnerships.

Find out more about our work in space

Previous post:
Do you have farm animals as pets? Then you need to know about biosecurity
Coming up next:
Future foods could make you healthier, and the planet greener