Irukandji forecasting: taking the sting out of stinger season

Irukandji forecasting: taking the sting out of stinger season

So, what are your plans for the Christmas and New Years break? Eating? Camping? Lounging? Lazing?

Good for you. Merry Christmas. But, while you’re chowing down on some delicious sustainable prawns and watching the Aussies continue thrashing the Poms, spare a thought for our scientist Dr. Lisa Gershwin, who will be spending her down time this year on a beach near Cairns, beta testing a forecasting system for the deadly Irukandji jellyfish.

You’ve probably already heard about this tiny but toxic family of stingers. Almost invisible to the naked eye, Irukandji contain a venom which, when injected into humans, results in the following not-so-pleasant list of symptoms: excruciating muscle cramps in the arms and legs, severe pain in the back and kidneys, a burning sensation of the skin and face, headaches, nausea, restlessness, sweating, vomiting, an increase in heart rate and blood pressure, and psychological phenomena such as the feeling of impending doom. If that’s not enough for you, take a look at this YouTube video showing the effects of Irukandji syndrome in real time (scroll through to about the two minute mark if you’re particularly time-poor). 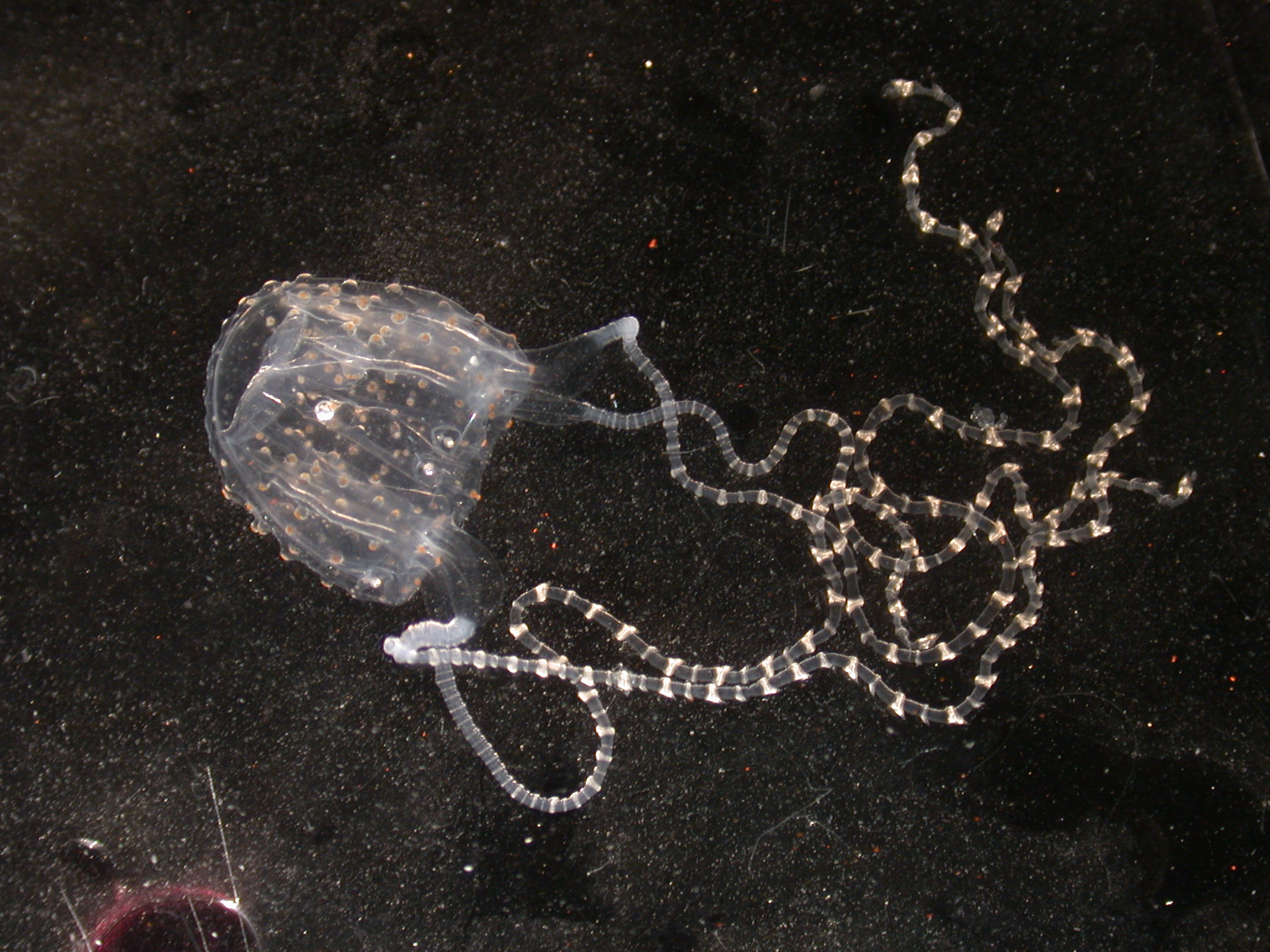 A Carukia Barnesi Irukandji specimen. Check out the stingers on its bell (head) – as if its tentacles weren’t enough trouble. Charming!

Irukandji generally lurk in tropical waters, and at certain times of year (right now, for instance) they can make ocean activities for us humans pretty dangerous unless you’re wearing protection, by way of a full-body stinger suit. Even though they generally only appear near coastal areas for a few days at a time, predicting where and when has been a mystery. And not only do Irukandji have a direct impact on human safety, they also cause negative flow-on effects to tourism and local economies in affected areas. 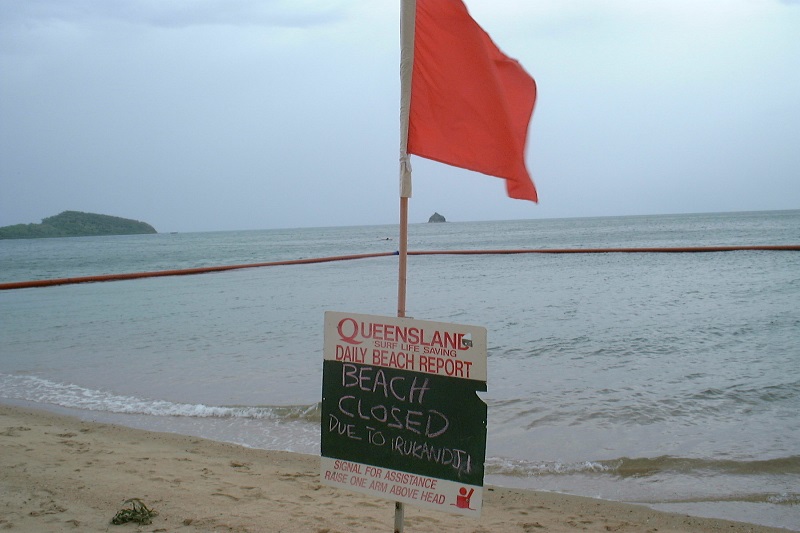 A picture of a beach closure due to Irukandji.

With studies showing their potential slow but steady drift southward due to warming ocean temperatures, things could get much worse. Can you imagine these guys popping up at Noosa Heads or Surfers Paradise for days at a time every summer? 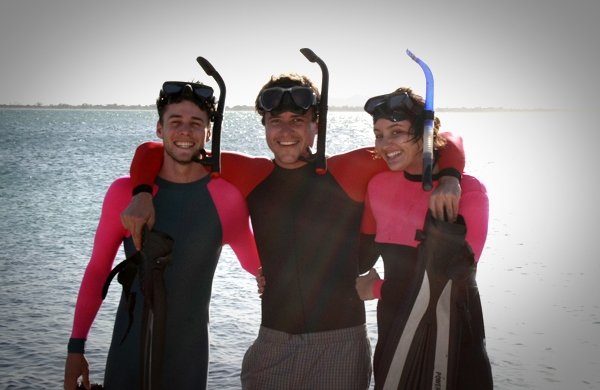 A picture of stinger suit fashion.

Stinger suit fashion – coming to a beach near you?

This is where Dr Gershwin and her team come in. Their Irukandji forecasting system aims to provide an early warning system for communities and local councils or governments, to let them know when and where the jellyfish are going to arrive.

Says Lisa, “We want to be able to predict the conditions that are favourable for near-shore Irukandji blooms so that we can reduce not only the direct risks for swimmers coming into contact with them, but also the related anxieties and flow-on effects that their mere presence evokes.”

First up, this research involved some detective sleuthing, analysing when and where stings were occurring and linking the patterns to weather correlations like wind, tide, and current.

“Our research to date has shown that we can effectively forecast the presence of Irukandji blooms in coastal waters by studying wind patterns in particular,” says Lisa.

“For example, in north Queensland the south-east trade winds are the dominant wind most days of the summer, but every now and then they drop off for a week or so a time.

“When this occurs, that down-welling pressure is lessened and we see intrusions from the oceanic water coming up on to the shelf. We believe that this is part of the mechanism that is helping to drive the Irukandji toward the shore.”

Having successfully created a ‘hindcast’ model that has accurately predicted Irukandji patterns, Lisa and her team will now be putting the model to the test at Palm Cove, near Cairns.

For Lisa, this is going to involve getting in the water every two daylight hours for 14 days straight. In full body stinger suit and with net dragging behind, Lisa will traverse the beach attempting to detect and catch the tiny, translucent jellyfish.

If the Irukandji show up when and where the forecasting system predicts, it will be a success. If not, Lisa will use the anomalies to fine tune the system.

And of course, if you’re going to be putting yourself in a potentially deadly situation, you may as well make the most of it.

“As well as testing our forecasts, we’ll be looking for other biological indicators that occur when Irukandji are present – checking out what other sorts of species they like to hang out with,” says Lisa.

“We are also going to have a team from the Australian Venom Research Unit collecting any Irukandji that we capture to study their venom, as there is currently no antidote for an Irukandji sting.” 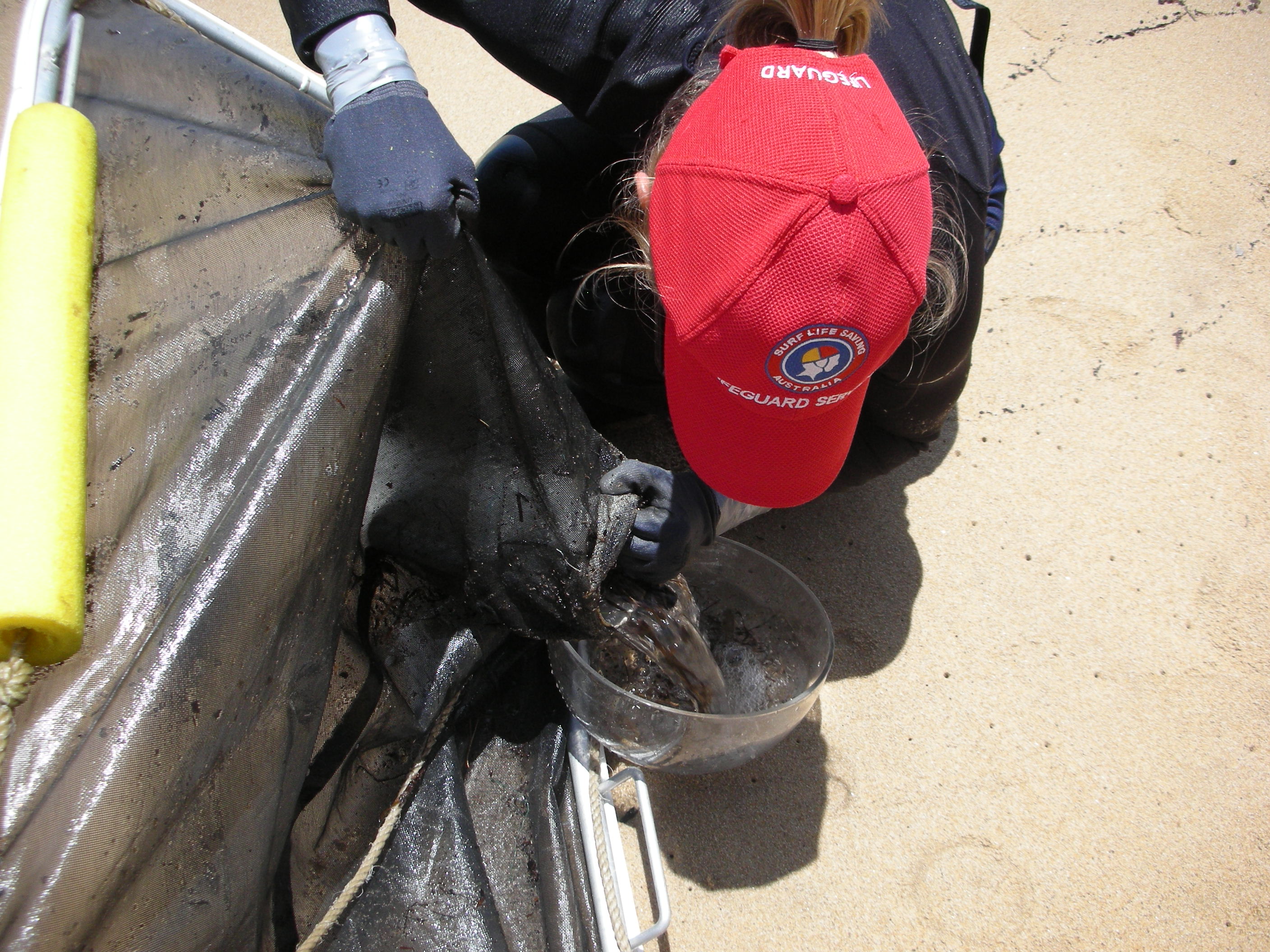 A picture of a scientist sifting for Irukandji.

And finally, Lisa and her team want to look at the relationship between humans and Irukandji.

According to Lisa, the primary goal of this project is to roll out the forecasting system up and down the Queensland coast, from Port Douglas in the north to Fraser Island in the south, and out to the reefs and islands of the Great Barrier Reef. In the long run, it could be used in other affected areas, like north Western Australia and the Northern Territory.

“The system has so many potential applications: a centralised website, an SMS advisory service, inclusion in weather reports, or even a personalised phone-app. If we could provide these types of alert services to government, industry and the general public and reduce the risk of stingers from our waters, the benefits would be enormous.”

In the mean time, the rigorous research process to improve and refine the Irukandji forecasting system continues. Stay tuned for more.

Previous post:
The fit-out of the laboratories and more!
Coming up next:
Paper money, it’s just not cricket