How far will a male mosquito travel to find a mate – and will he cross the road?

How far will a male mosquito travel to find a mate – and will he cross the road?

Over the course of the five-week ‘Mark, Release Recapture’ (MRR) study 3000 male mosquitoes were released and then recaptured through a network of over 70 traps. All to find out if they'd cross a road for a mate. 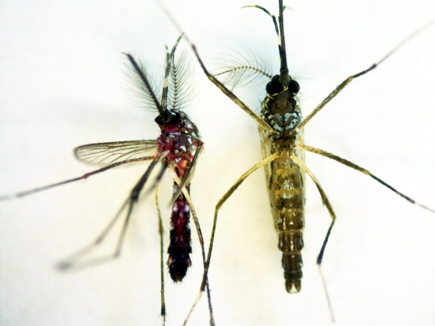 Compare the pair: red dye was used to mark mosquitoes.

No, it’s not a joke. Pose this question to a member of our local Innisfail mosquito research project and they’ll give you a straight answer – On average less than 100 metres, and yes but most prefer not to.

Yes, male mozzies do cross the road, or at least Mourilyan Road in East Innisfail where the project team has been studying the behaviour of the male Aedes aegypti mosquito; the female of the species transmits the dengue and Zika viruses.

Over the course of the five-week ‘Mark, Release Recapture’ (MRR) study 3000 male mosquitoes marked with a dye were released and then recaptured through a network of over 70 traps set in residents backyards, all to see how far the mosquitoes fly, how quickly they mate and how long they live.

“The long-term goal of our research in Innisfail is to show that we can suppress and even remove the invasive Aedes aegypti mosquito from the urban landscape,” Project Manager Helen Murphy said. “Understanding the behaviour of the male mosquito is key to achieving this goal.”

“In 2017 we hope to carry out further studies and test new technologies being developed in the USA by project partner Verily [a Google affiliate]. These studies will involve releasing male mosquitoes that are effectively sterile,” Dr Murphy said. “If the sterile male mates with a wild female, the eggs she lays won’t hatch, thereby limiting the number in the next generation of Aedes aegypti. If we get our numbers right this would mean that the Aedes aegypti population would quickly die-off in the community.” 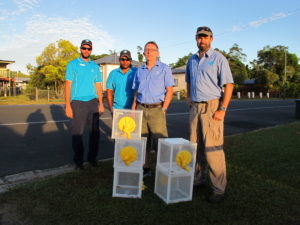 Why did the mosquito cross the road? To get recaptured of course.

In the New Year the project team will expand their community engagement activities to share their plans with Innisfail residents, describing a small study to release sterile male mosquitoes in the first half of the year. If this is supported and successful, the project team will plan for a larger study towards the end of 2017.

“These initial studies in Innisfail will be the first of their kind carried out internationally as part of our recently launched Debug project,” Debug Product Manager Dr. Nigel Snoad said. “We are pleased with the initial results from the MRR and the high level of community support for our work, but we’re really just at the ‘preschool’ stage of what is a long-term world-wide project,” he said. “Working with CSIRO and James Cook University we expect to learn a lot by doing the next set of studies in 2017. We want to see the back of these bad bugs not only in Innisfail but across the world.”

For more information about the project, visit our project page.