G-strain should not affect COVID-19 vaccines

G-strain should not affect COVID-19 vaccines

Our experiment showed that COVID-19 vaccines developed with an older virus strain should still work against the newer G-strain. 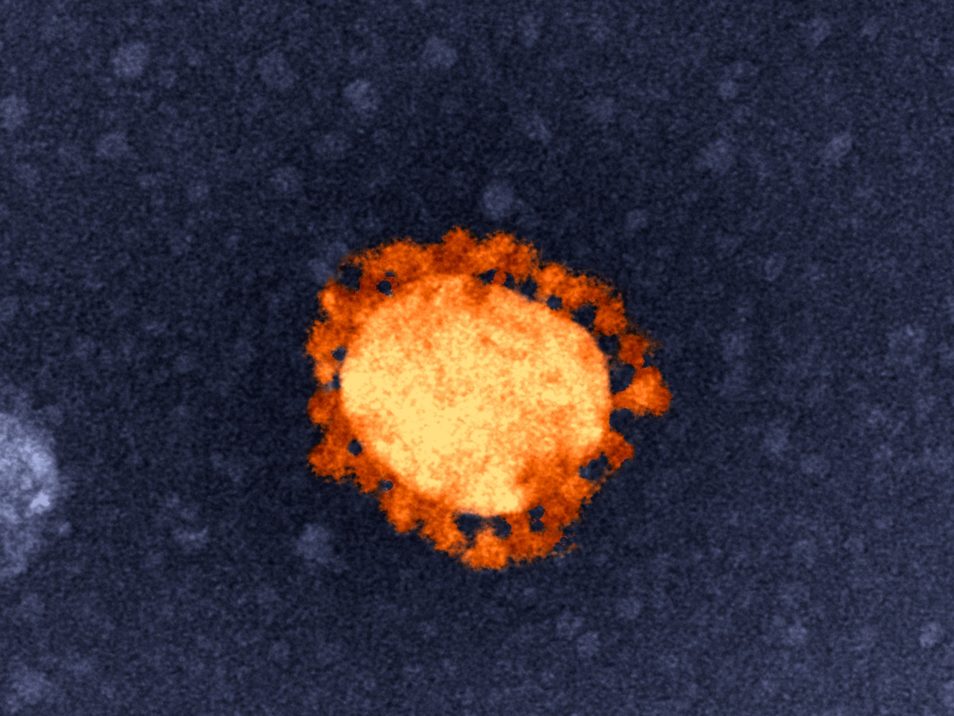 The G-strain of the SARS-CoV-2 virus is now the most dominant strain worldwide. But our research found COVID-19 vaccines developed with the old strain should work against this newer strain.

You may have heard about the ‘G-strain’ of SARS-CoV-2, the virus causing COVID-19. It’s now the most dominant strain of the virus worldwide. But there has been some speculation about whether COVID-19 vaccines in development would still work against it.

Our researchers have conducted an experiment that shows vaccines developed with an older virus strain should still work against the G-strain.

But what’s all the fuss about? Let’s take a closer look.

What’s the G-strain of SARS-CoV-2?

As a virus adapts to a new host (in this case, humans) it can mutate, creating new strains.

“Researchers analyse published genome sequences of virus samples to spot new strains and even track their spread around the world,” he said.

As the COVID-19 threat grew earlier this year, researchers around the world got to work. They were creating potential vaccines against the causative virus, SARS-CoV-2. The ‘D-strain’ was the initial version of the virus, and vaccines were created to target its distinctive spike protein. This includes the vaccine candidates by Inovio Pharmaceuticals and Oxford University we’ve been testing in pre-clinical studies.

But SARS-CoV-2 kept mutating as it spread. A new strain bumped the ‘D-strain’ out of the top spot. It’s called the ‘G-strain’ or the D614G mutation. And it now accounts for about 85 per cent of cases worldwide. 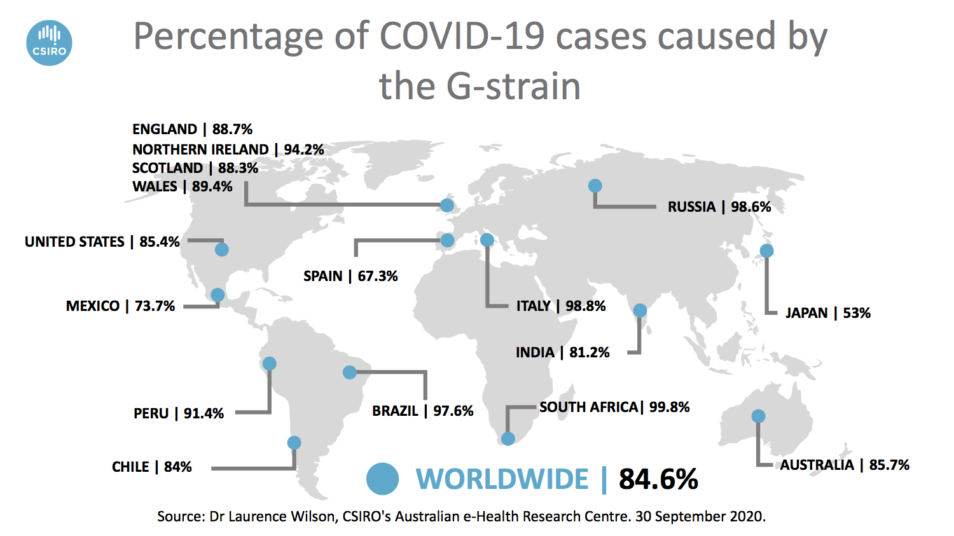 84.6 per cent of COVID-19 cases worldwide are caused by the newer G-strain.

What were we worried about?

Crucially, the G-strain included a mutation in a critical spot: the spike protein.

“The spike protein binds to receptors in our lungs and airways (called ACE2), using them as an entry point to infect cells. So most vaccine candidates have been developed to target the spike protein,” Vasan said.

Trials of potential vaccines were already underway all over the world. Hardworking researchers were working long days, day after day, throwing their collective brainpower into solving this problem. So it was natural for everyone to ask: if the spike protein had changed, would the vaccine candidates still work? 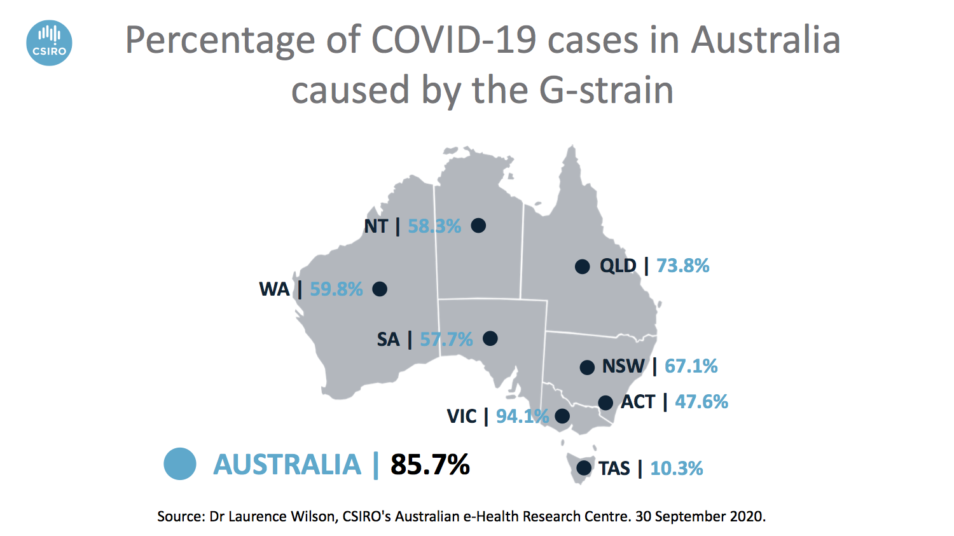 85.7 per cent of COVID-19 cases in Australia are caused by the G-strain.

We tested vaccine candidates against the G-strain

With so much doubt in the air, it was time for some cold hard science over at our Australian Centre for Disease Preparedness.

Our researchers took blood samples from ferrets vaccinated with the Inovio candidate (as human samples were not yet available). They tested these samples against SARS-CoV-2 virus strains, both with and without the D614G mutation.

The results were clear: samples from vaccinated ferrets showed a strong immune response against the virus. They developed neutralising antibodies… even against the G-strain!

Our researcher Dr Alex McAuley said this is known as the B-cell response and is important for a vaccine’s short-term efficacy.

“It also means the body is likely to have developed memory B-cells. They remember past infections and quickly produce antibodies when the virus is detected again,” he said.

In other words, the team’s experiment showed the spike protein in the G-strain is still vulnerable to vaccine candidates designed against it.

“Vaccine matching is where vaccines need to be tweaked seasonally for the northern and southern hemispheres, as we have with influenza,” Vasan said.

“This is to keep up with new dominant strains of the virus. But it’s unlikely we’ll need that with SARS-CoV-2 based on how this virus is behaving to date.

“Unlike the influenza virus, the SARS-CoV-2 virus has a proofreading mechanism, so it doesn’t mutate as fast.” 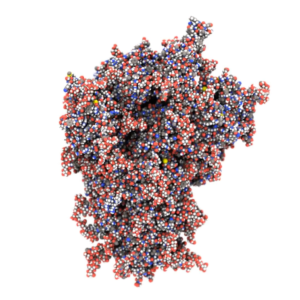 We used biomolecular modelling too

Biomolecular modelling involves simulating on a computer to visualise how different molecules move, including viral molecules like SARS-CoV-2. It also enables us to visualise how they might interact with potential vaccines or drugs.

Dr Michael Kuiper is the Team Leader of the Molecular & Materials Modelling Group at CSIRO’s Data61. His team used biomolecular modelling to take a closer look at the G-strain. And this confirmed that the mutation would not change how effective the vaccine candidate tested would be.

“Biomolecular modelling allows us to understand how the virus works, what mutations look like and how they change the virus,” Michael said.

“It also tells us how we might be able to combat it. Every movement from a molecule is a potential Achilles’ Heel – if we can understand the virus and how it operates, we can discover and understand its vulnerabilities.”

Stay up-to-date with our coronavirus research