From oceanic critters to the oceanic frontier: our researchers navigating the Indian Ocean

From oceanic critters to the oceanic frontier: our researchers navigating the Indian Ocean

Our researchers are aboard RV Investigator, travelling along an Indian Ocean route that was last studied 60 years ago, looking at how the oceans have changed with the climate. 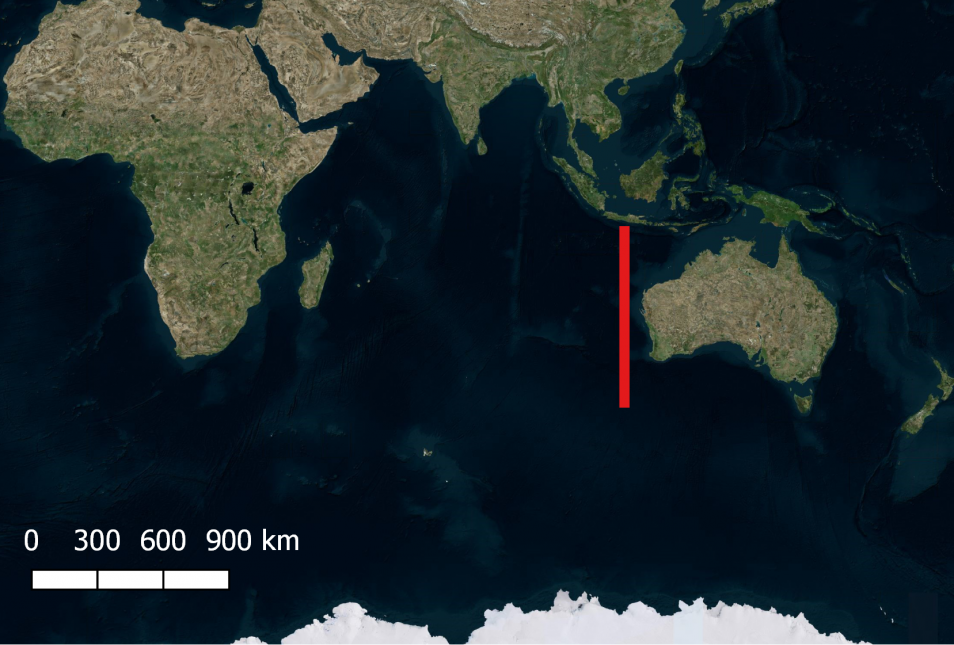 From the 110⁰ E meridional line in the Indian Ocean from 40⁰S where the Indian Ocean joins the Southern Ocean to the tropical waters at 10⁰S near Christmas Island, we hope our scientists don’t get seasick!

Over 2.5 billion people from 32 countries live around the border of the Indian Ocean. Fishing industries located here produced a significant percentage of the world’s annual catch. And they continue to increase yields while employing tens of millions of people. However, the Indian Ocean is the fastest warming ocean in the world and is at risk of being impacted by climate change. One factor of climate change, ocean acidification, could threaten food security and economic prosperity for a third of the world’s population.

With Australia having the world’s longest coastline in the Indian Ocean, we spoke with four of our researchers currently aboard our RV Investigator for the UN-led Second International Indian Ocean Expedition (IIOE-2). They are travelling from where the Indian Ocean joins the Southern Ocean to the tropical waters near Christmas Island.

The Leeuwin Current on Australia’s west coast is the only ocean current of its kind (subtropical eastern boundary current). It plays a major role in the distribution of marine life.

The Leeuwin Current transports warm, low nutrient waters and ocean creatures from the tropics southward along the Australian coast. A deep ocean current delivers high nutrient, cold water into the Indian Ocean from the Southern Ocean.

The complex relationships and mixing between these waters creates zones of unique phyto- and zoo- plankton communities along the west Australian coast. Claire Davies is investigating using a device called the continuous plankton recorder (CPR).

Ocean discoveries: new plankton has already been sighted on the voyage.

“The CPR collects plankton samples 10 metres below the surface for us to study,” explained Claire. “We can then map their distributions and abundances across our oceans.”

The CPR kit is an oldie but a goodie, remaining unchanged since 1927. However, for the first time, it will provide a gap-free record of the plankton in the Indian Ocean. Helping us to understand the effect of the Leeuwin Current and eddy systems on the mix of plankton species that live from tropical to temperate regions. Already, the results have Claire excited.

“I’ve already seen a lot of plankton new to me, and we may even find species new to science!” 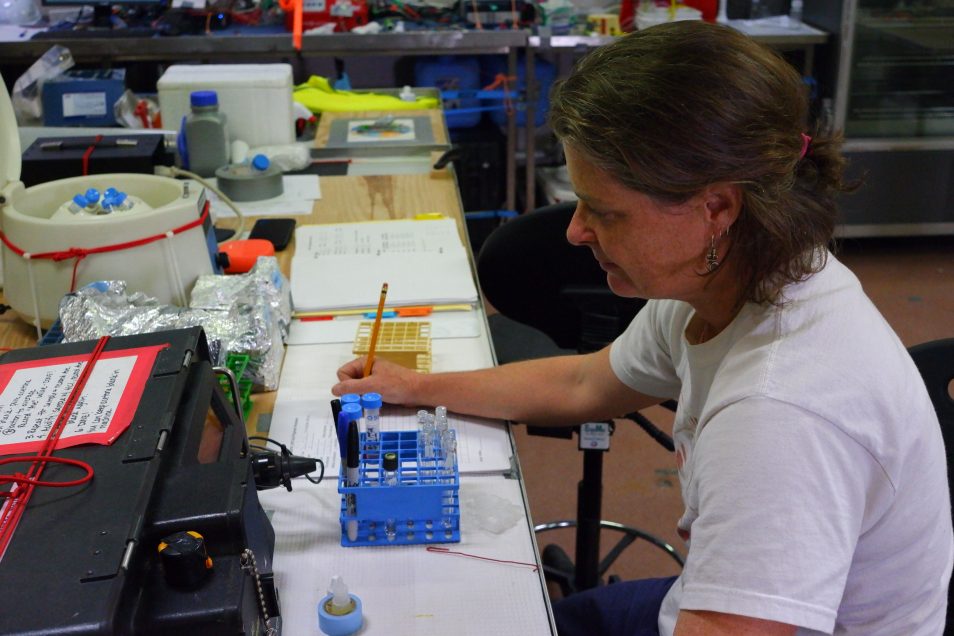 Claire Davies is collecting plankton to better understand their composition in tropical and temperate regions.

Max is using a unique instrument called a vertical microstructure (turbulence) profiler (VMP) to measure the ‘mixing of water’. Scientifically speaking the instrument measures the vertical velocity shear throughout the water column at a very high resolution.. It’s not an easy task. “You don’t realise how hard it is to get data. The ocean is wild,” said Max.

This is Max’s first voyage onboard the RV Investigator, and he is addressing a relatively new ocean challenge – understanding and modelling its turbulent mixing. Understanding turbulent mixing helps us to improve ocean models accuracy and prediction skill. Large scale first order dynamics are well resolved by most models, but resolving the second order flow remains a challenge and demands more observations.

“The 110 ⁰E voyage will help to determine the role of the Indian Ocean in regulating the climate in the region,” said Max. “We are comparing how the Indian Ocean flows and how physical conditions have changed over the past half a century since the transect was first studied. New technologies also enable us to measure processes on a much finer scale. This will generate more accurate climate and oceanographic models and satellite products to gain insights into the physical conditions of the Indian Ocean’s subsurface.” 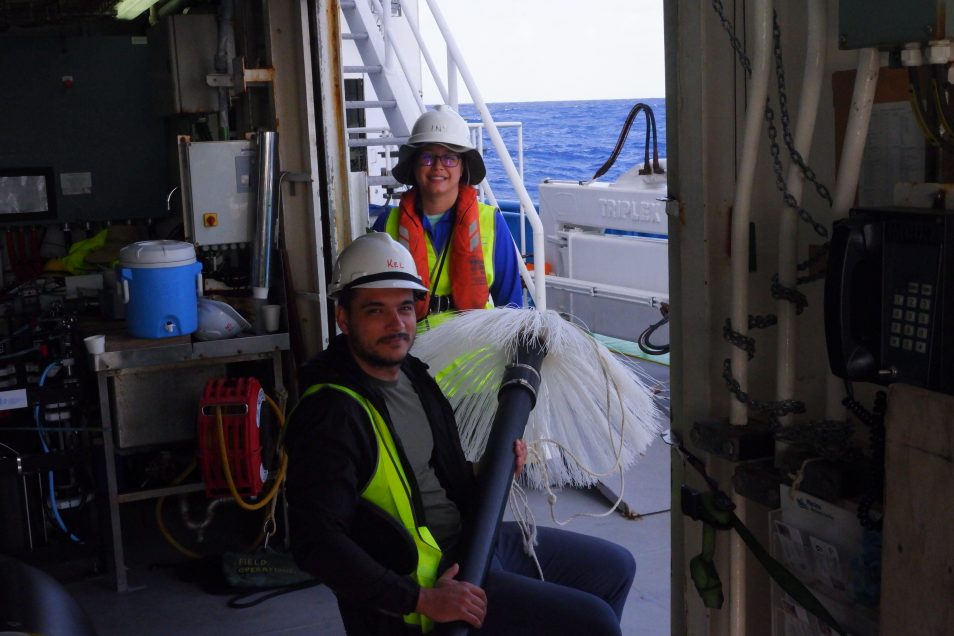 Let there be light: Maxime Marin (front) is joining the voyage for the first time to study turbidity of the Indian Ocean

The world’s oceans provide up to 80 per cent of the oxygen we breathe – and phytoplankton produces 330 billion tonnes of oxygen each year! This oxygen is produced when microscopic plants, called phytoplankton, photosynthesize, just like a plant on land does.

Along with being a source of oxygen, phytoplankton sits at the bottom of the marine food web, providing a source of nutrition for fish and baleen whales. With the Indian Ocean warming the fastest in the world, it’s these tiny critters that will be affected first.

“I am conducting nutrient assessments along the 110 ⁰E meridional line to understand whether the nutrients essential for phytoplankton growth and photosynthesis (carbon, phosphorous, nitrogen and silicate) have become less available as the ocean warms up,” reveals Peter Thompson.

“Water sampling is extensive, as phytoplankton can grow to nearly 175 metres below the ocean surface, so it will be a few months until we can compare data collected over the last 60 years as to whether the nutrient concentrations are changing in the east Indian Ocean and, if so, by how much.” 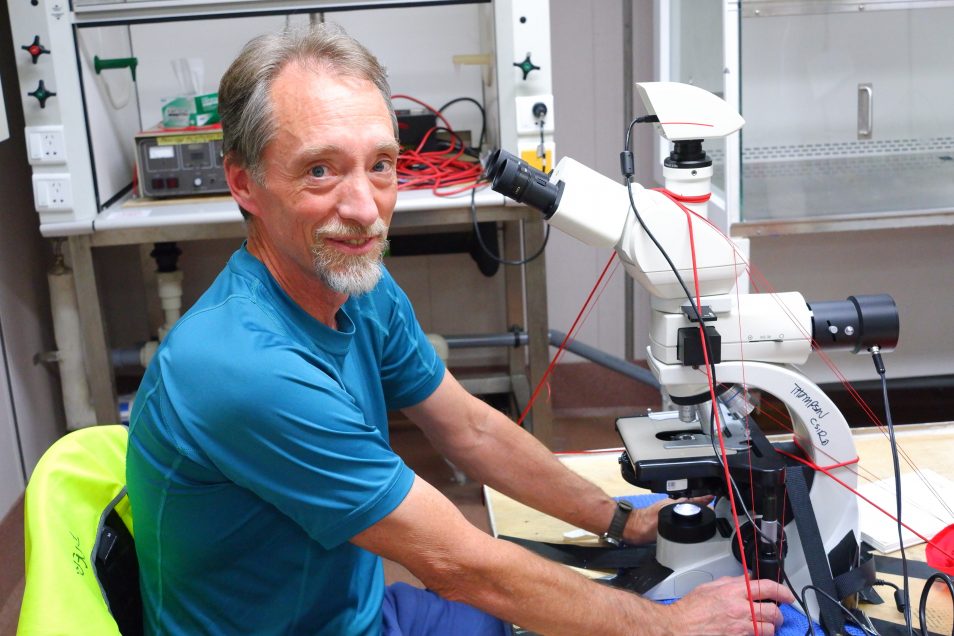 Red alert: the Indian Ocean is warming so Dr Peter Thompson is researching how ocean changes will impact plankton.

Each year, 40 billion tonnes of carbon dioxide (CO2) is released into the earth’s atmosphere. Of which, at least 25% is assimilated into the world’s oceans. Ocean acidification occurs when the pH of seawater becomes acidic due to elevated CO2 uptake.

Karlie McDonald is improving our knowledge on CO2 assimilation and transport in the east Indian Ocean. She is measuring CO2 and alkalinity (a buffer of increasing pH) in seawater along the 110 ⁰E transect from the surface to 5000 metres deep. Karlie is also investigating how ocean acidification impairs marine life to protect social and economic values in the region.

“Ocean acidification impacts the construction of calcium carbonate shells and skeletal structures for sea butterflies and other calcifiers. Such as corals, crustaceans, and molluscs. This can have far-reaching impacts on the marine ecosystem, including fisheries and aquaculture,” states Karlie. 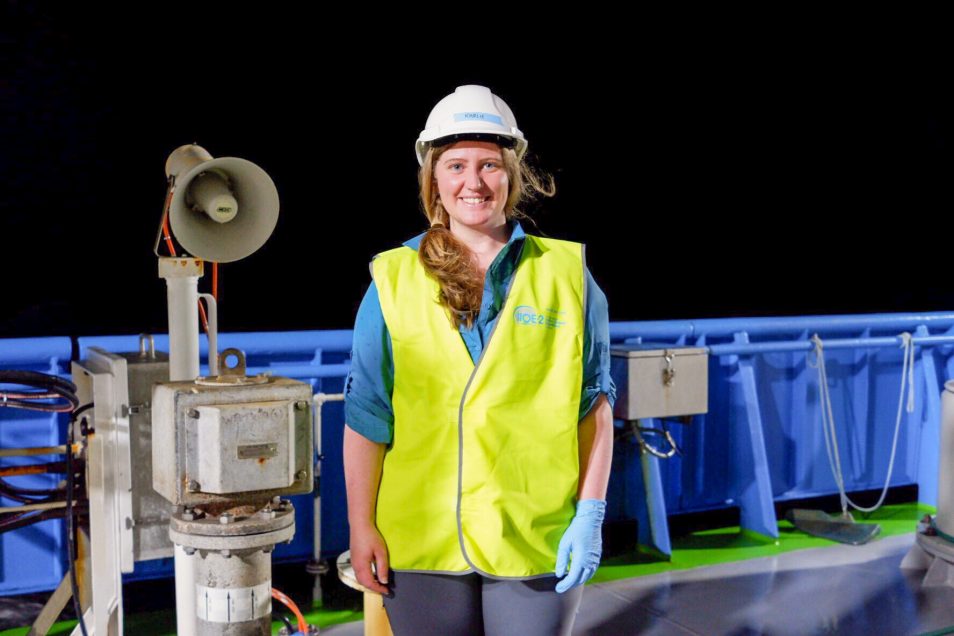 Coral crusader: Karlie McDonald is researching how carbon dioxide is transported through the Indian Ocean and how ocean acidification impacts the survival of marine life, like coral. Photo: Helen Phillips

This World Oceans Day, we want to say thank-you to our dedicated researchers making waves in marine science. This voyage on our RV Investigator is led by chief scientist Professor Lynnath Beckley from Murdoch University. CPR is funded by the Integrated Marine Observing System.

See how we celebrate our oceans every day!

Previous post:
Baby sharks: tracking along our east coast
Coming up next:
Dungeons and Dragons and fish: an abyssmal adventure