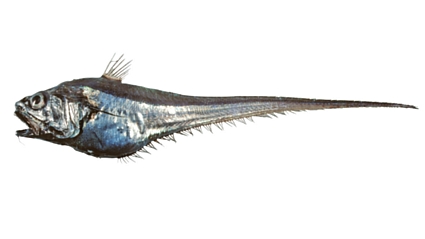 Dark Smiling Whiptail: I was trying to be smart and find a fish with some sort of connection to the Winter Solstice (today) to try and make the shortest day of the year bearable. So I started to search the ScienceImage database using words like solstice, daylight, night etc etc and came across the Dark Smiling Whiptail.

I have got to tell you there is very little of interest about this fish. It lives down to about 850m of water which is something, but apart from that, not much.

Then I started to have a look at the scientists who described the fish and named it in 1999 – T. Iwamoto & A. Williams. As it turned out Dr Tomio Iwamoto has been the Curator of Ichthyology for 37 years at the California Academy of Sciences.

Then I found a connection to CSIRO. Dr Iwamoto is named as one a number of scientists who have made a major contribution to the fishmap interactive database which is a part of the Atlas of Living Australia. Dr Iwamoto has done a lot of work in Australian waters and contributed an enormous amount of information and experience to marine science.

There is always something interesting about everything.

So, hopefully this has helped get you through the day. For those in the Southern Hemisphere, from now on things are looking brighter!

Previous post:
The day the Sun stood still
Coming up next:
Come and watch the sunset over the Indian, Pacific and Southern Oceans…