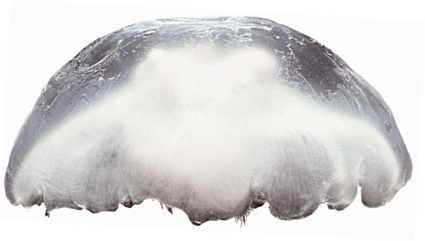 Moon Jellyfish: It is rare for these to live more than six months in the wild but they are really interesting.

All species in the genus are closely related and is hard to pick them apart except by genetic sampling.

They grow to about 25–40cm in diameter and can be recognized by its four horseshoe-shaped gonads, easily seen through the top.

It is not really a strong swimmer and it mainly drifts with the current feeding on plankton, fish eggs, small organisms and molluscs. It captures food with its tentacles and scoops it into its body for digestion.

Moon Jellyfish are found throughout most of the world’s oceans, from the tropics to as far north as latitude 70°N (runs through the middle of the US and Spain) and as far south as 40°S (runs through Tasmania).

It has also been found in waters as cool as 6C to as warm as 31C.

They do not have any respiratory parts such as gills, lungs, or trachea so it respires by diffusing oxygen from water through the thin membrane covering its body.

Previous post:
Thanks a million!
Coming up next:
Ideas + innovation = one 'hack' of a day!