We’ve got a special FFT for you today- a feature article by Rich Hillary on the Southern Bluefin Tuna and why we should be concerned that the current biomass is between 3−8% of the tuna’s unfished level.

Southern Bluefin Tuna are majestic, temperate ocean dwellers, roaming across the oceans of the southern hemisphere, from the tropics to the sub-Antarctic. They grow to two metres and 200 kilograms, mature between eight and 20 years of age, and can live to 40.

Southern Bluefin eggs are spawned in warm waters off Java and north-western Australia. As larvae and small juveniles they ride the Leeuwin Current down the coast of Western Australia to spend their first summer in south-western WA and the Great Australian Bight. They continue to summer in the Bight, wintering in either the south-east Indian Ocean or Tasman Sea until about five. Then they stop returning to the Bight. Instead they move between feeding grounds, areas of high productivity spread between New Zealand and South Africa. Later as mature adults they join the spawning migration to the tropics below Indonesia.

Southern Bluefin are highly prized on the Japanese sashimi market, where the overwhelming majority of the global catch is sold. They have been heavily fished since the 1950s by high-seas long-line vessels and purse seine. They have also been grown in pens in Port Lincoln South Australia since the 1990s. 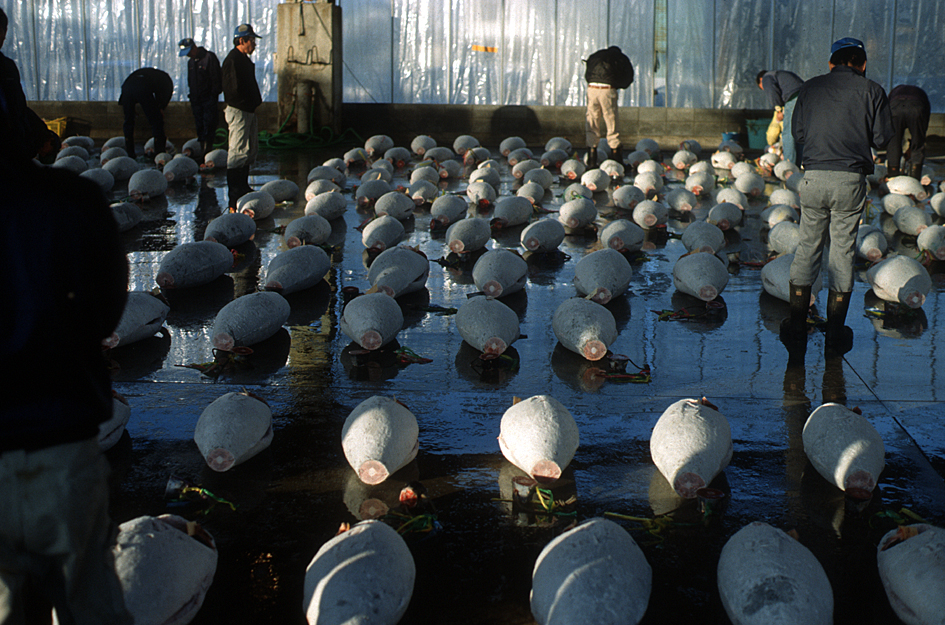 Southern bluefin tuna at a market in Japan.

The current best scientific advice is that mature biomass is between 3−8% of the tuna’s unfished level. This is well below accepted national and international sustainable levels. Due to its low spawning biomass and, until recently, high levels of fishing mortality Southern Bluefin are classified as conservation dependent under Australia’s Environment Protection and Biodiversity Conservation Act and Critically Endangered by the IUCN.

Overfishing is the greatest recognised threat to Southern Bluefin. With low numbers of spawning adults, natural variation means there is a high risk of further declines. Several years of low juvenile survival, even with little or no change in fishing, can result in rapid decline. There is no buffer of long-lived adults that exists when populations are higher.

Management of Southern Bluefin is via international agreements on quotas, which can often lead to decision paralysis and status quo management. This management system can be slow to respond to problem signals such as low numbers, leaving the population ill-equipped to deal with the vagaries of juvenile survival.

In 2006, the revelation of significant under-reporting of catches from the long-line vessels further increased the uncertainty in stock status and the risk of future tuna declines. In response, the Commission for the Conservation of Southern Bluefin Tuna (CCSBT) substantially reduced the global quota (in 2006 and 2009). An international body of major fishing nations, the CCSBT renewed its commitment to developing a formal rebuilding plan for the Southern Bluefin. Monitoring of the population has shown that the initial quota reductions have stopped the overfishing.

Member scientists of CCSBT instigated a process of developing a robust rebuilding strategy in the early 2000s. This strategy, called a Management Procedure, differs to more common (and problematic) ad hoc quotas. The specific objectives to be achieved are agreed beforehand.

Quota setting decisions are largely automatic – key data is fed into the procedure and a total allowable catch is produced. No negotiation is permitted and no lengthy stock assessment process is required.

CSIRO scientists were heavily engaged with the international team that developed the Management Procedure, adopted and used to set the global quota by CCSBT in 2012. This is the first such outcome for an international tuna fishery. 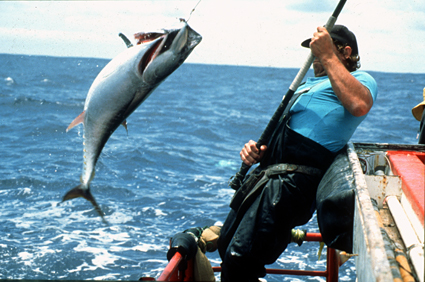 A fisherman catches a southern bluefin tuna for tagging and release. Scientists tag the fish so they can learn more about their areas of distribution and behaviour.

An important benefit of the Management Procedure approach is that it gives scientists more time to explore the remaining uncertainties in our understanding of the Southern Bluefin. CSIRO scientists have recently completed electronic tagging and genetic abundance estimation projects to better understand the migration patterns and breeding capacity of the stock.

It is expected that, even with the rebuilding strategy in place, recovery of the tuna will take a number of years. Southern Bluefin are long-lived and mature late, so the implementation of the Management Procedure is the start of a process, not the conclusion of one.

The next challenges for Southern Bluefin are for members of the CCSBT to maintain the accurate reporting of data from the fishery, to ensure that recommendations coming from the Management Procedure are adhered to, and for the scientists to continue integrating the latest research into the management framework so that future decisions are made on the best available scientific advice.

Previous post:
The last blocks were nearing completion in the shed.
Coming up next:
Investigator is terrific in Scientriffic!