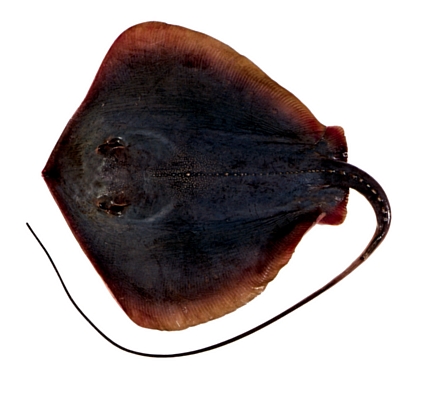 Black Stingray: This is one cool looking ray. You can see where filmmakers and the like get their inspiration for things like the Batmobile, spaceships and aliens.  The rays are not aggressive to humans but the stinging spine can give a painful injury.

It is one of the largest species of stingrays in Australia and grows to 1.8m wide, up to 4m long and weighs in at over 200kg. It usually has one stinging spine.

It is found in coastal and offshore waters off south-eastern Africa, Australia and New Zealand to a depth of about 440m. In Australia it is found from northern NSW around the southern coast to the central coast of WA.

Rays are closely related to sharks, but they have flattened bodies, enlarged pectoral fins, and gill slits on their ventral (belly) surfaces.

Like other rays, it is aplacental viviparous, which means the developing embryos are sustained to term by uterine milk produced by the mother.

CSIRO Publishing has a cracker of a book on rays and sharks: Sharks and Rays of Australia. It is on special until the end of November  – $99.95 (lets say $100) compared to the usual price of $120.

Here is the publisher’s blurb:

The waters around Australia are home to the greatest diversity of sharks and rays on Earth. Spookfish, numbfish, stingarees, fiddler rays and cookie-cutter sharks are just some of the 322 shark, ray and chimaerid species illustrated in the latest edition of Sharks and Rays of Australia. 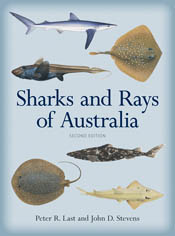 Australia’s sharks, rays and chimaerids — collectively known as Chondrichthyans — are just as intriguing as their names suggest. Their eclectic colours, shapes and patterns reflect environments ranging from remote estuaries to ocean depths. Their new descriptions, and their striking portraits by watercolourist Roger Swainston, will help to guide the identification and conservation of these diverse species.

The first edition of Sharks and Rays of Australia was produced in 1994. Since then, 29 species have been discovered in Australian seas and more than 100 species have been named and formally described. As well as documenting these advances, the new edition includes updated species classifications and descriptions, distribution maps, line illustrations by Georgina Davis, family keys and outlines of Chondrichthyan biology and interactions with humans.

The book catalogues a rich seam of Australia’s marine biodiversity, providing an indispensible compendium for scientists and a baseline reference for the fishing industry.

Sharks and Rays of Australia is an essential reference for professional and recreational fishermen, divers, naturalists, students, fish and conservation biologists, and anyone interested in sharks and rays.

Previous post:
Australia’s Marine National Facility 2014-15 application process goes smoothly
Coming up next:
They might have been app-less ancients, but their powers of observation rarely eclipsed