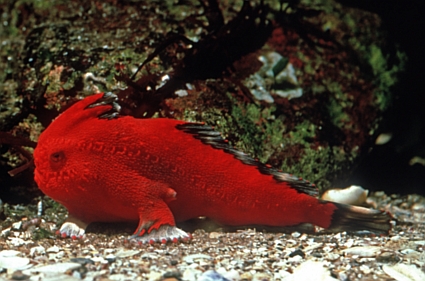 Red Handfish: The red handfish is found on shallow rocky reefs in only a few locations in south- eastern Tasmania. They grow to about 100 mm in length. Handfish are small, bottom-dwelling fishes that would rather ‘walk’ on their pectoral and pelvic fins than swim. They are native to Australia and five of the eight identified handfish species are found only in Tasmania and Bass Strait. The spotted handfish is endemic to Tasmania’s lower Derwent River estuary. In 1996, the spotted handfish became the first Australian marine fish to be listed as endangered. Scientists, government and the community are involved in a federally-funded recovery plan for the spotted handfish led by CSIRO Marine Research.

Previous post:
Explainer: what is biodiversity and why does it matter?
Coming up next:
Sock-et to me!