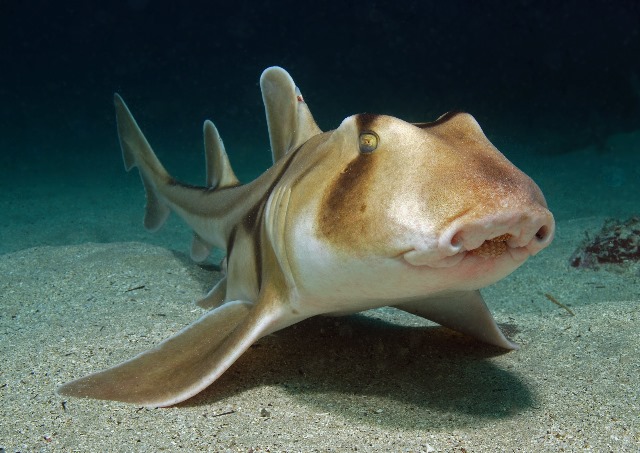 Port Jackson shark: He looks kind of goofy… I just want to give him a cuddle really. And I probably could since this little guy (well, he can grow up to 1.6m) doesn’t pose a risk to humans. At the worst, he’ll leave you with a bruise on the calf.

They are endemic to southern Australian waters and divers will be familiar with their goofy face, as they generally go no deeper than 100m below the surface. They are nocturnal and inhabit rocky environments.

They are a migratory species and as such will be heading up to warmer waters to breed over the next few months.

Unlike most other sharks, these beauties don’t have serrated teeth. The anterior teeth are small and pointed and the posterior teeth are broad and flat.  This allows them to hold and break, then crush and grind the shells of molluscs and echinoderms. Nomnomnom.

Weird fact: this shark can eat and breathe at the same time.

Previous post:
Winter is here – time to fight the flu
Coming up next:
Insect of the week – Delicate basketwork can mean trouble for gum trees