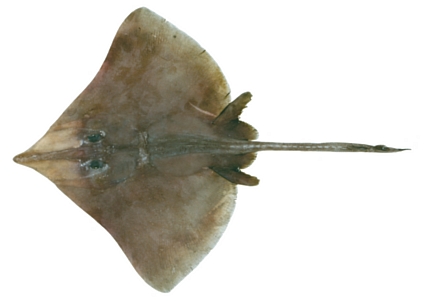 Bight Skate: A slow growing, large and late maturing skate lives in quite deep waters from about 150m to 700m on the continental shelf from New South Wales to Western Australia – including Tasmania. They live for at least 16 years.

There is not a lot know about the biology of the skate and it could be solitary as an adult and tends to be patchy in distribution.

This species is impacted by trawling but also occupies large areas of lightly-trawled to non-fished grounds along the southern and southwestern coast of Australia. Semi-virgin populations occur in the Great Australian Bight.

Females grow to about a maximum size of 185cm in length and males 156cm.

*Some of the information above is from the IUCN Red List of Threatened Species.

Previous post:
Antarctic Medal for CSIRO oceanographer
Coming up next:
Getting to the bottom of the Fijian Ocean