Fewer flights and a pesticide-free pitch? Here’s how Australia’s football codes can cut their carbon bootprint

Fewer flights and a pesticide-free pitch? Here’s how Australia’s football codes can cut their carbon bootprint

Ahead of this weekend’s grand finals, let’s examine the carbon emissions of our major men’s football leagues: the AFL, NRL and A-League, as well as Australia’s Super Rugby teams. 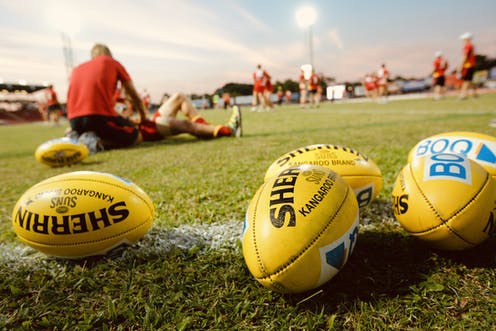 Men on the AFL football field

Ahead of this weekend’s grand finals, let’s examine the carbon emissions of our major men’s football leagues: the AFL, NRL and A-League, as well as Australia’s Super Rugby teams.

Australian sport’s response to the COVID-19 pandemic has been remarkable. Major leagues reorganised with impressive speed to keep games going. Schedules dissolved, seasons were compressed and players relocated. And the once unthinkable is now reality: the AFL grand final will be held in Brisbane.

What if the Australian sport industry could apply the same urgency and innovation to a different but no less significant global crisis – climate change?

Each week, teams and fans fly vast distances, producing significant carbon emissions. And that’s not to mention their other activities. According to the UN Sports for Climate Action Framework, “sport’s contribution to climate change – through associated travel, energy use, construction, catering, and so on – is considerable”.

Professional sport has enormous power to influence positive change. So ahead of this weekend’s grand finals, let’s examine the carbon emissions of our major men’s football leagues: the AFL, NRL and A-League, as well as Australia’s Super Rugby teams. 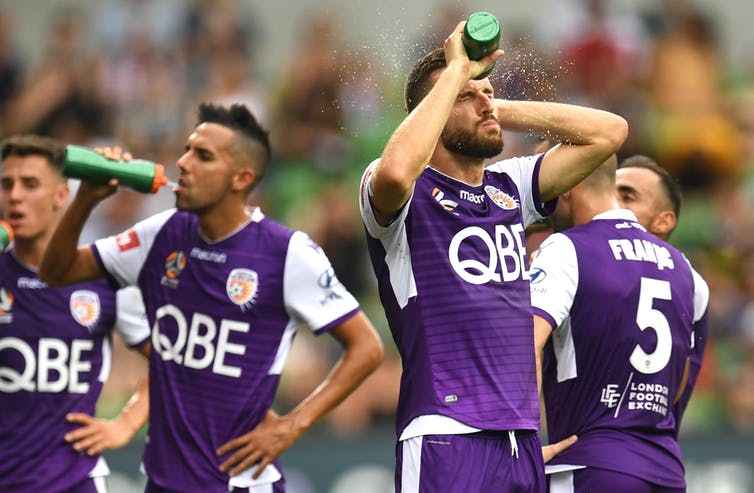 Players struggle in the heat during an A-League match between Melbourne City and Perth Glory in Melbourne last year. Sport is a major contributor to carbon emissions and resulting global warming. Image: Julian Smith

The carbon cost of football

Our small-scale study analysed air travel-related emissions for the final four rounds of 2019 regular season games. We used the International Civil Aviation Organisation’s measurement methodology to create a snapshot of carbon dioxide-equivalent (CO₂-e) generated by flying teams to and from games in different cities.

Air travel from just one month of football competition in Australia across the four men’s codes generated emissions equivalent to about 475 tonnes of carbon dioxide. Across the codes, teams travelled 231,000km in a single month.

Here’s how each league compared:

– NRL: Largely concentrated in NSW and Queensland, the 16 teams covered the shortest distance: 46,400km. They generated 92.1 tonnes of CO₂-e or around 5.7 tonnes per team.

– A-League: 62,660km of air travel, which generated 107.5 tonnes of CO₂-e. The team average (10.7 tonnes) is higher than the AFL and NRL, as teams are spread between Perth and Wellington in New Zealand.

– Super Rugby: the four Australian teams in 2019 produced 87.8 tonnes of CO2-e from 49,624km in the air, with a team average of about 21.9 tonnes. Two games in Tokyo increased this average, although the Sunwolves are now defunct. Nonetheless, teams also flew to Argentina, South Africa and New Zealand during the season.

Unsurprisingly, far-flung teams produced the highest CO2-e emissions. However, the relatively short Melbourne-Sydney air route is the second most carbon-intensive at around 34 tonnes, exceeded only by Melbourne-Perth. The 25 teams in Sydney and Melbourne (plus Geelong) mean many return flights between the cities are required each season.

Explore the full results in this interactive graphic:

Come fly with me

Full seasons ran between 18 and 27 rounds, depending on the code. The results prompted us to consider how leagues and fixtures might be organised to reduce the number of flights taken during a season.

Many teams are located in the Newcastle-Sydney-Wollongong corridor (plus Canberra) and Melbourne/Geelong. So visiting interstate and New Zealand teams could play two or three fixtures in these locations before returning home. Depending on the code, similar arrangements are possible in southern Queensland, Adelaide and Perth.

Organising teams into geographically proximate conferences, as Super Rugby does, is worth considering. This might mean, for example, that Melbourne-based AFL or A-League teams, and Sydney-based NRL or A-League teams, might play each other more often in front of large crowds in their home city.

Representative fixtures, such as the State of Origin rugby league series, could be shortened and based in one location. Teams could travel to play two or three games, then return home.

Even minor reductions in travel-related carbon emissions are worth investigating, and publicly showcasing, in an effort to spur more serious environmental efforts by leagues and teams. 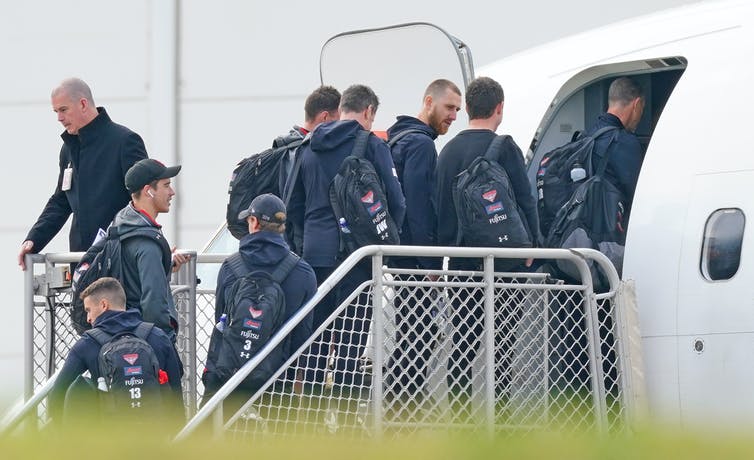 There are other ways leagues can encourage a sustainable sporting future. In Britain, for example, League Two’s Forest Green Rovers is the world’s first carbon-neutral football club.

Its home ground features solar panels, electric vehicle charging points and a vegan matchday menu. The team plays on an organic pitch, cut by a solar-powered robot lawnmower, and collects and recycles rainwater. Clubs in Australia could follow this lead to achieve meaningful environmental credentials.

Codes could hold environmentally themed rounds and games, and promote current and former sportspeople speaking about the need for action on climate change and environmental issues, such as:

Last summer’s extreme weather in Australia was a taste of what’s to come under climate change.

Bushfires covered the Australian Open tennis in thick smoke. Cyclists in the Tour Down Under rode through bushfire-ravaged landscapes, and the three previous tours had stages shortened or modified due to extreme heat.

In other parts of the world, sports have been disrupted by events such as floods and reduced snow and ice cover.

Reducing the carbon footprint of sport is clearly in the interests of both the planet, and the leagues themselves. It’s now time for sport’s decision-makers to face reality.