While the physical effects of coral bleaching in the Great Barrier Reef have been well documented, we wanted to understand the social and cultural impact.

Media coverage of mass coral bleaching on the Great Barrier Reef may have been a major tipping point for public concerns around climate change, according to research published today.

Severe and extensive bleaching during the summers of 2016 and 2017 has been directly attributed to human-caused climate change. Much of the ensuing media coverage used emotional language, with many reports of the Reef dying.

While the physical effects of the bleaching have been well documented, we wanted to understand the social and cultural impact.

Our research, including a study published today in Nature Climate Change, has compared survey responses from thousands of Australians and international visitors, before and after the bleaching event.

Our research team conducted face-to-face interviews with 4,681 visitors to the Great Barrier Reef region, in 14 coastal towns from Cooktown to Bundaberg, over June to August in both 2013 and 2017. We asked more than 50 questions about their perceptions and values of the Reef, as well as their attitudes towards climate change.

We found a large proportion of respondents, including Australians and overseas visitors, expressed forms of grief in response to loss and damage to the iconic ecosystem. Negative emotions associated with words given in short statements about “what the Great Barrier Reef means to you”, included sadness, disgust, anger and fear.

Emotional appeals are widely used in media stories and in social media campaigns, and appealing to fear in particular can heighten a story’s impact and spread online.

However, a side-effect of this approach is the erosion of people’s perceived ability to take effective action. This is called a person’s “self-efficacy”.
This effect is now well documented in reactions to representations of climate change, and is actually a barrier to positive community engagement and action on the issue.

In short, the more afraid someone is for the Great Barrier Reef, the less they may feel their individual efforts will help to protect it.

While our results show a decline in respondents’ self-efficacy, there was a corresponding increase in how highly they valued the Reef’s biodiversity, its scientific heritage and its status as an international icon. They were also more willing to support action to protect the Reef. This shows widespread empathy for the imperilled icon, and suggests greater support for collective actions to mitigate threats to the Reef. 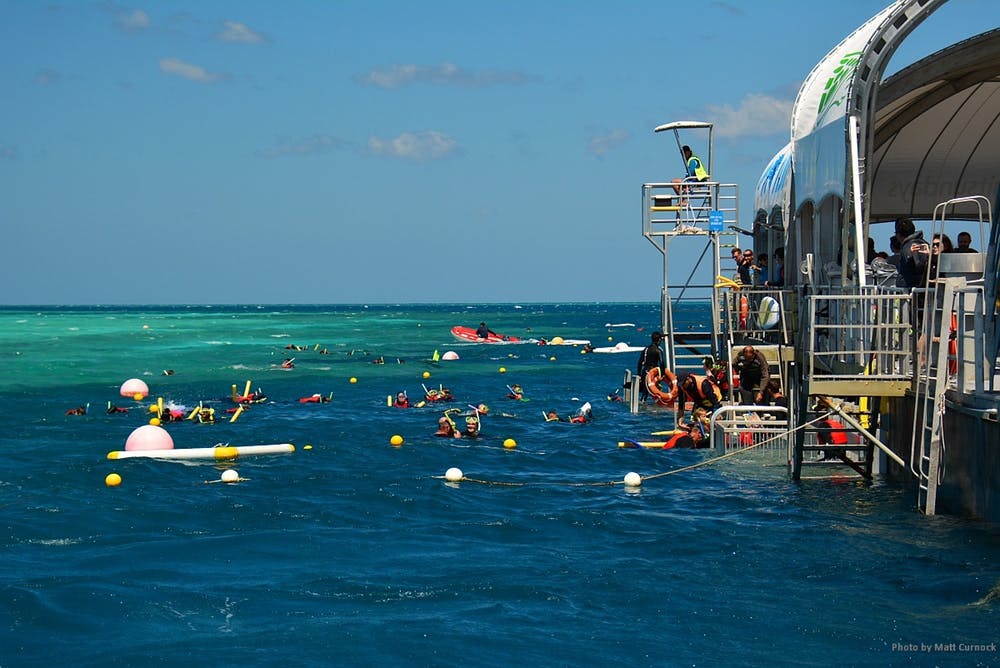 We observed a significant increase in the proportion of people who believe that climate change is “an immediate threat requiring action”. In 2013 some 50% of Australian visitors to the Great Barrier Reef region agreed climate change is an immediate threat; in 2017 that rose to 67%. Among international visitors, this proportion was even higher (64% in 2013, rising to 78% in 2017).

This represents a remarkable change in public attitudes towards climate change over a relatively short period. Previous surveys of Australian climate change attitudes over 2010 to 2014 showed that aggregate levels of opinion remained stable over that time.

Comparing our findings with other recent research describing the extent of coverage and style of reporting associated with the 2016-2017 mass coral bleaching event, we infer that this event, and the associated media representations, contributed significantly to the shift in public attitudes towards climate change.

As a source of national pride and with World Heritage status, the Great Barrier Reef will continue to be a high profile icon representing the broader climate change threat.

Media reports and advocacy campaigns that emphasise fear, loss and destruction can get attention from large audiences who may take the message of climate change on board.

But this does not necessarily translate into positive action. A more purposeful approach to public communication and engagement is needed to encourage collective activity that will help to mitigate climate change and reduce other serious threats facing the Reef.

Examples of efforts that are underway to reduce pressures on the Reef include improvements to water quality, control of crown-of-thorns starfish outbreaks, and reducing poaching in protected zones. Tourism operators on the Reef are also playing an important role in restoring affected areas, and are educating visitors about threats, to improve Reef stewardship.

Clearly there remains an immediate need to reduce greenhouse gas emissions to ensure the Reef’s World Heritage qualities are maintained for future generations.

However, maintaining hope, and offering accessible actions towards attainable goals is critical to engaging people in collective efforts, to help build a more sustainable future in which coral reefs can survive.

The authors would like to acknowledge Nadine Marshall, who co-wrote this article while employed by CSIRO. We thank our other co-authors of the Nature Climate Change paper, including Lauric Thiault (National Center for Scientific Research, PSL Université Paris), Jessica Hoey and Genevieve Williams (Great Barrier Reef Marine Park Authority), Bruce Taylor and Petina Pert (CSIRO Land and Water) and Jeremy Goldberg (CSIRO & James Cook University). The scientific results and conclusions, as well as any views or opinions expressed herein, are those of the authors and do not necessarily reflect those of the Australian Government or the Minister for the Environment, or the Queensland Government, or indicate commitment to any particular course of action.

Great minds: How our research is benefiting our global icon