Explainer: what is ocean energy?

Explainer: what is ocean energy? 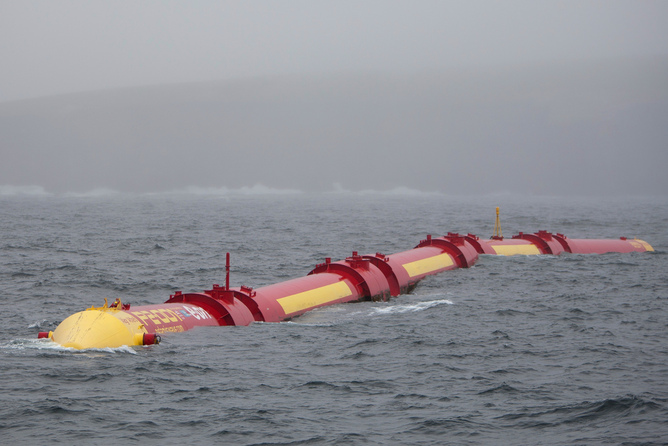 Ocean power can be harnessed for electricity generation using both wave energy and the tide. Image: Scottish Government.

Renewable ocean energy harnesses the power of the oceans to produce electricity. This can be done in several ways, but the resources that have the most immediate potential in terms of energy production for Australia and globally are:

Several wave energy converters, tidal turbines and tidal stream devices are at various stages of development in Australia. While there are many more devices in Australia, those mentioned below reflect the diversity of the technologies.

Carnegie is a private company that has developed wave energy technology. It has one wave unit deployed off the coast of Garden Island in Western Australia, supplying power to the Royal Australian Navy base located on the island. There are plans to deploy further devices.

This unit is a “point absorber”, which means it can accept wave energy from any direction. It is out of sight under the waves and works by pumping water to the surface and through a hydro turbine to generate electricity. This high pressure ocean water can also be used in a desalination plant to produce fresh water.

Oceanlinx has several designs under development. They are oscillating water columns, which operate like a blowhole; waves flow into and out of a tunnel, displacing air and forcing it through a turbine. These devices are a “line absorber”. This means that they need to be oriented toward the wave front to generate energy.

Ocean Power Technologies Australasia plan to construct a 19 MW point absorber wave farm off the coast of Victoria. The rise and fall of the waves causes a floating buoy to move up and down. The oscillating action is converted to electricity via a mechanical generator.

BioPower Systems have both wave and tidal energy devices. A pilot plant is being developed at Port Fairy in Victoria using the BioWave wave energy converter. The BioWave is an inverted pendulum design and it mimics the motion of kelp in the ocean by swinging back and forth with wave motion. This swinging motion is turned into electrical energy.

Tenax have plans to deploy tidal turbines which can be used to harness both tidal and ocean current flows. They want to deploy the technology off the coast of Darwin to take advantage of the larger tides in that region.

Each of these technologies has key advantages and disadvantages over alternative renewable technologies. On the positive side, ocean energy is more forecastable and consistent than wind and solar photovoltaics. But the ocean is a tough environment in which to operate continuously over long periods of time.

Internationally, there are a number of marine energy test centres in countries such as the United Kingdom, USA, Ireland and Netherlands for testing the capabilities of devices in the oceans over a longer period of time.

A wave farm was constructed in Portugal using the Pelamis device, but due to financial uncertainty in the region it was abandoned. The Pelamis device is like a long snake that sits on the surface and individual parts move and drive a hydraulic fluid through a motor.

A wave test facility has been operating at Lysekil in Sweden since 2001 using an array of Seabased AB point absorber wave energy devices. This site is now being turned into a full‐size wave farm using the same technology. The first generator was installed in March 2013.

As the UK and Ireland have large tidal resources, a tidal turbine has been deployed off the coast of Northern Ireland, supplying electricity to the grid.

An alternative to other renewables?

There is still much to be understood about the technologies and the ocean renewable resource itself. More detailed resource mapping needs to be undertaken in Australia to identify the best locations for wave and tidal farms.

The vast majority of devices under development globally have not been trialled at sea, which can be a very testing environment. Devices also have to be integrated with the electricity grid to examine the effect this intermittent resource can have on grid stability.

Projections show that the cost of electricity in the year 2030 with carbon pricing from ocean renewable energy could range from A$110‐325 MWhr. This compares well with other renewable technologies, with solar PV A$60‐210 MWhr, wind A$55‐120 MWhr and solar CSP A$90‐300 MWhr. For comparison, existing coal fired power costs around A$80 MWhr and new coal‐fired power can cost A$125‐195 MWhr. 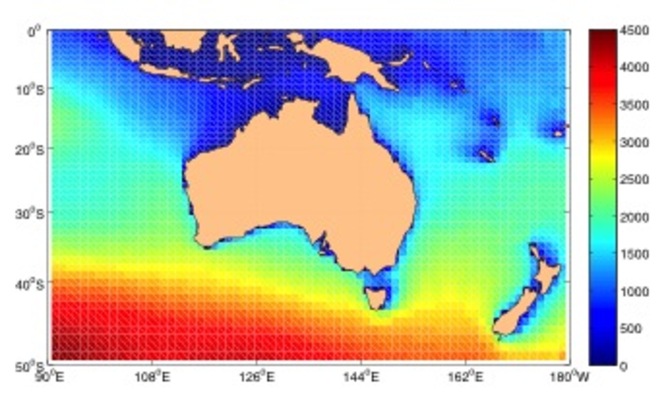 By combining Australian wave energy resource data and the performance curve of one type of wave energy converter, the annual amount of electricity (MWh) that could be generated from farms of such devices is shown in the figure above. This shows that the best places for wave power in Australia are along the south coast of Western Australia, South Australia, Victoria and Tasmania.

Tidal power is currently only cost-competitive in areas with large tidal resources. However, there may be niche opportunities in remote areas which rely on more expensive generation options, such as in northern Australia and regions of the Bass Strait.

The potential for wave energy in Australia in particular is large. CSIRO modelling has shown that by 2050, wave energy has the resource and the economic potential to supply up to 10% of Australia’s future projected electricity demand. Wave energy could also have an impact globally with significant potential in Europe, Canada, USA and South Africa.

Previous post:
It’s a KO for science
Coming up next:
Insect of the week: weevils in the malt, and everywhere else