Emergency services benefit from a high-speed world without wires

Emergency services benefit from a high-speed world without wires

Members of the CFA put out smothering fires after a fast moving bushfire took out at least 3 homes in the Melbourne north east suburb of Warrandyte, Monday Feb. 10, 2014. A total fire ban is in place across Victoria during the heat wave temperatures while several fires are burning throughout the state.(AAP Image/Joe Castro) NO ARCHIVING

When disaster strikes – such as January’s bushfire in Victoria or the recent cold spell that froze much of north America – it’s vital for emergency services to get the latest information.

They need to access real-time data from any emergency sites and command centres so they can analyse it, make timely decisions and broadcast public-service updates.

CSIRO thinks it has a solution in its high speed and high bandwidth wireless technology known as Ngara, originally developed to help deliver broadband speeds to rural Australia.

The organisation has announced a licensing deal with Australian company RF Technology to commercialise Ngara so it can be used to allow massive amounts of information to be passed between control centres and emergency services in the field.

There is already interest from agencies in the United States and it’s hoped that Australian agencies will soon follow.

The technology will package four to five times the usual amount of data into the same spectrum. This will allow emergency services to send and receive real time data, track assets and view interactive maps and live high definition video from their vehicles. It’s a step in what has been a long journey toward an ambitious vision.

For years, the vision of the communications research community was “connecting anyone, anywhere, anytime” – a bold goal encompassing many technical challenges. Achieving that depended heavily on radio technology because only radio supports connectivity and mobility.

A research surge in the late 1990s and 2000s led to a wealth of technology developed in the constant drive to squeeze more out of radio spectrum, and to make connections faster and more reliable for mobile users.

This radio access technology became 3G, LTE, LTE-A and now 4G. Europe is working on a 5G technology. We’ve also seen huge advances in wireless local area networks (WLAN) and a strong trend to offload cellular network data to WLAN to help cope with the traffic flowing through the networks.

Despite this, the data rate demands from users are higher than what mobile technology can offer. Industry commentators who live in the world of fixed communication networks predict staggering growth in data demand which, time tells us, is constantly underestimated. 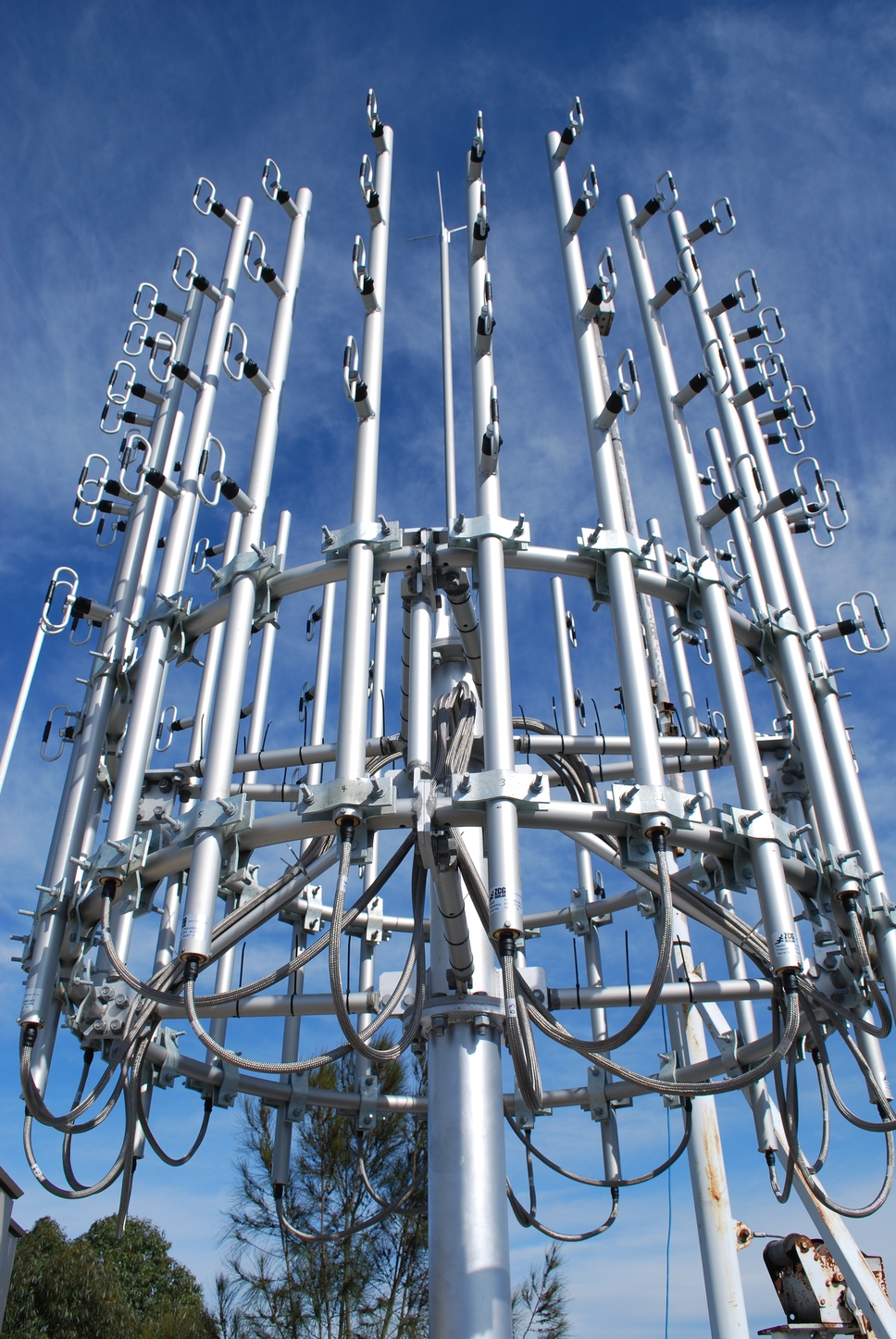 We’ve even stretched our ability to name the volume of data flowing through networks: following terabytes we have exabytes (1018), zetabytes (1021) and yottabyes (1024 bytes) to describe galloping data volumes.

Beyond that, we run out of prefixes, but we’ve not run out of ideas to generate more data or new devices to connect to a network.

A few more serious problems arise from all of this traffic flowing through the world’s networks. The first is the “spectrum crunch”. We have sliced the available radio spectrum in frequency, time, space and power. We need to pull something big out of the hat to squeeze more out of the spectrum available in heavy traffic environments such as cities.

When the total data volume which needs to be moved in terms of bits-per-second-per-square-metre rises into the range requiring backhaul capacities and is mobile, then some clever dynamic backhaul technology is needed.

As more of us carry yet more devices, and continue to enjoy high quality video-intensive services, we will keep pushing up our data rate demands on mobile networks. In theory, there is no known upper limit on the amount of data an individual can generate or consume. In practice, it depends on available bandwidth, the cost of data and the ability of devices to serve it up to us.

We have seen amazing progress in mobile data rates over the past decade. This trend will need to continue if we’re to keep pace with demand.

To address the burgeoning data demand, and building on a strong history in wireless research, CSIRO has developed two major pieces of new technology – Ngara point-to-point (backhaul) and Ngara point-to-multi-point (access) technology. (Ngara is an Aboriginal word from the language of the Dharug people and means to “listen, hear, think”.) 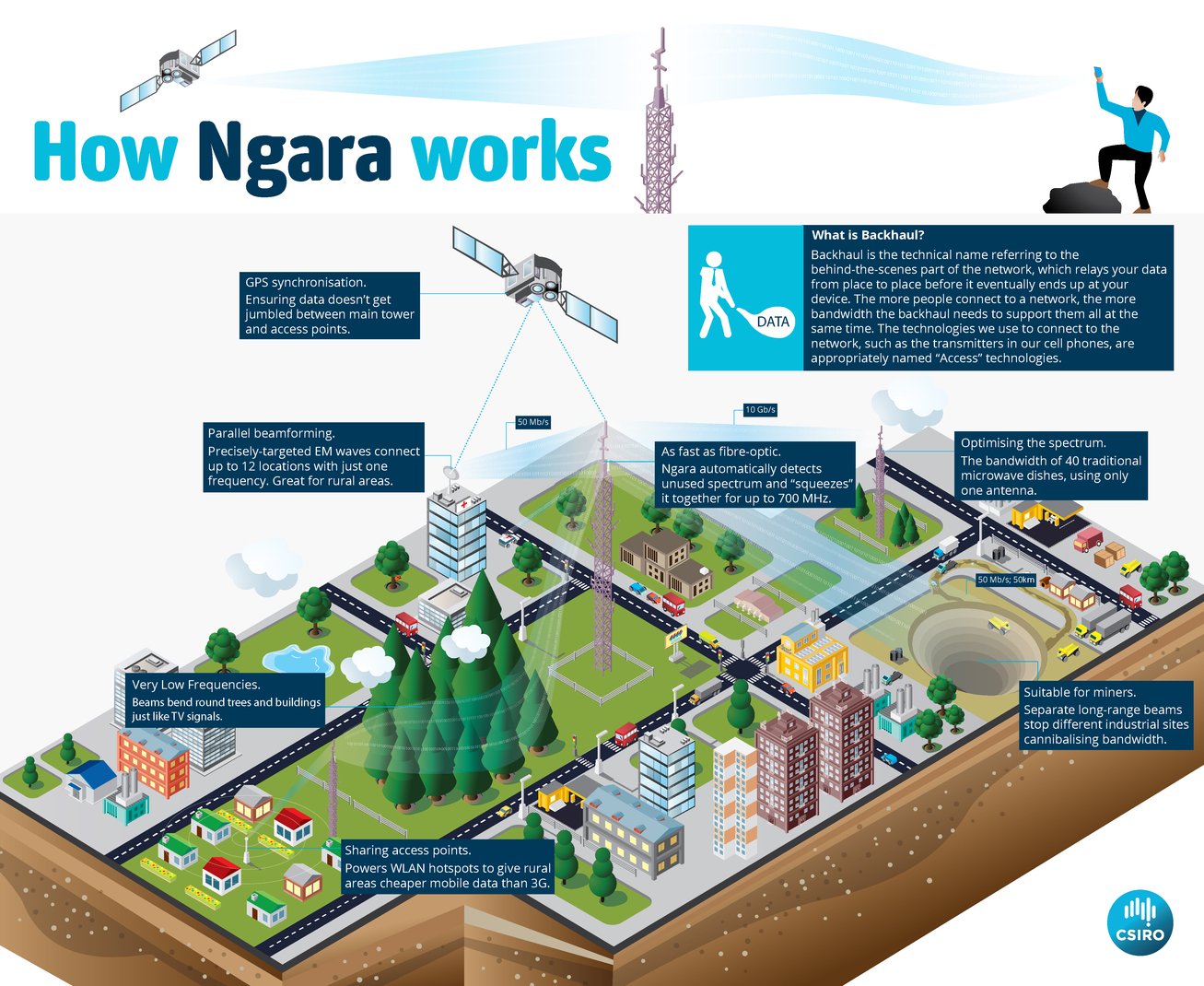 The latter Ngara technology solves several big challenges over LTE networks through its “narrow cast” beam forming transmissions and smart algorithms which can form a large number of “fat pipes” in the air, reducing energy wastage of the radio signal, and increasing data rates and range.

It also enables wireless signals to avoid obstacles like trees, minimises the need for large chunks of expensive spectrum and allows agencies to dynamically change data rates where and when needed during an emergency.

In Australia we are looking at a field trial of Ngara in remote and regional communities to deliver critical broadband services such as health and education.