Drifting like Nemo, RV Investigator has been following the East Australian Current to make some interesting discoveries. Here's the highlight reel.

To help tell the story of our most recent voyage, we were joined by a guest writer on board RV Investigator, April Abbott from Macquarie University. On this voyage, April led a sediment coring project to measure the chemical composition of sediments off eastern Australia.

After a busy time at sea, April gives us her highlight reel from the trip. 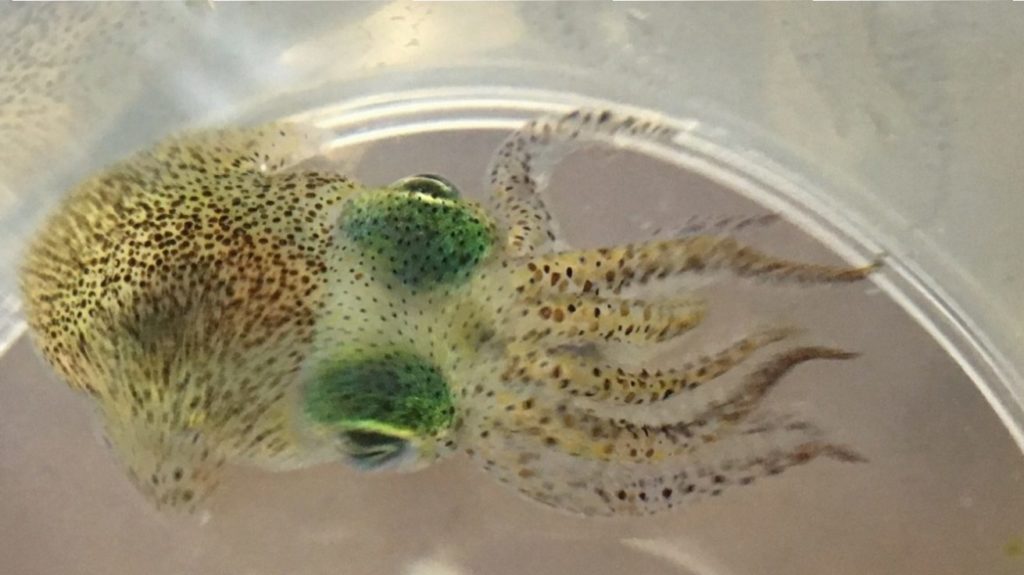 One of Nemo’s friends from the EAC. Image – April Abbott.

It’s hard to believe that our three weeks on Investigator has come to an end – the time went so fast!  Today marked the end of the science operations, when the science stops and the clean-up begins in preparation for our demobilisation day. Demobilisation needs to be quick as there is little time between voyages, and we have to be off before the next team of super scientists can join the ship!

We have spent three weeks in an extremely productive and dynamic region of the ocean off the east Australian coastline. Our main target was the location where the warm waters of the East Australian Current (EAC) enter the cool Tasman Sea, creating a warm, nutrient rich environment. In our research we’ve sampled the water, air, sediments, and even the rain! So much science, so little time!

So much plankton! We saw several different communities of plankton as we travelled on this voyage. The coastal nutrient rich waters had high phytoplankton diversity and a large variety of diatoms . The cold ocean core eddy (a swirling mass of cold water) in contrast had a single dominant species of colony forming phytoplankton (or ‘green slime’).

In the EAC, we saw mainly cyanobacteria (blue green algae) and very few phytoplankton, with only the occasional diatom (single celled algae with a cell wall made of silica).  This is because the EAC is warm and low in nutrients (such as iron, nitrate, and silicate), limiting diatom growth. 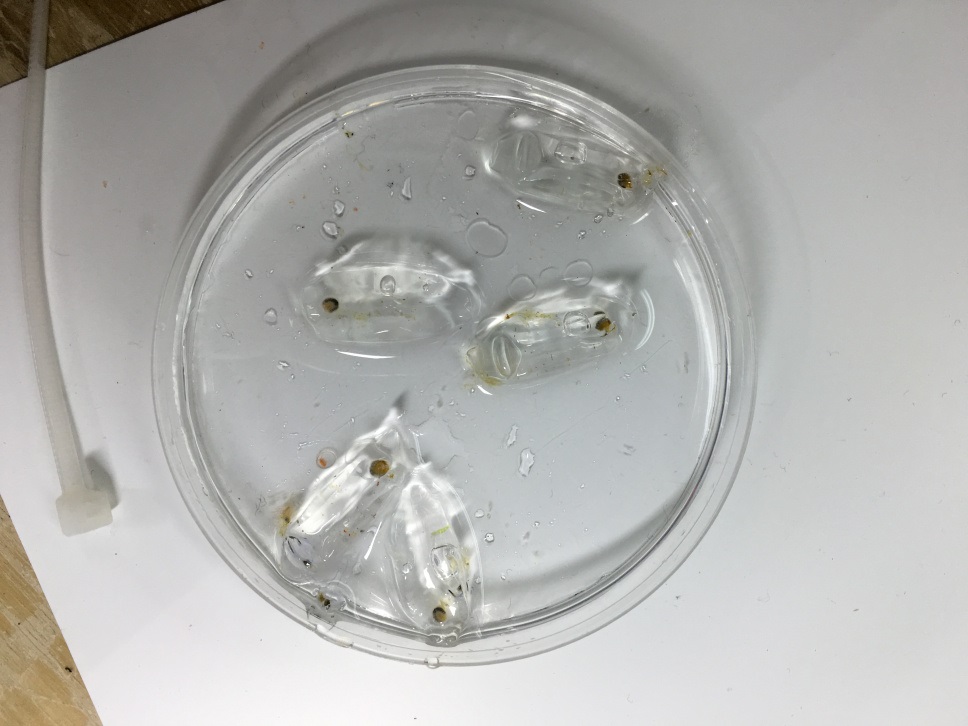 No, this isnâ€™t dinner! Itâ€™s a dish of salps recovered from a net tow. Image - April Abbott.

No, this isn’t dinner! It’s a dish of salps recovered from a net tow. Image – April Abbott.

It was a great time for whale watching along the coast, and the highlight for me was the rare sighting of a sperm whale. According to the white board outside the mess, his name was Moby. We also got a close up visit from two humpbacks during a Conductivity-Temperature-Depth (CTD) deployment on the first part of the voyage. Then we saw dolphins riding the bow wave several times, making for some great photo opportunities.

The observations of whales and dolphins were an important part of a marine mammal survey on this voyage. The main goal of this work is to create a spatial model of the distribution of cetaceans (whales and dolphins) and collect data on zooplankton. This then allows us to try and make a link between the food source (zooplankton) and whale presence and behaviour. The team doing the survey sighted almost 500 cetaceans during the voyage! Over 100 of these sightings (mostly humpbacks) were on the voyage north from Sydney. 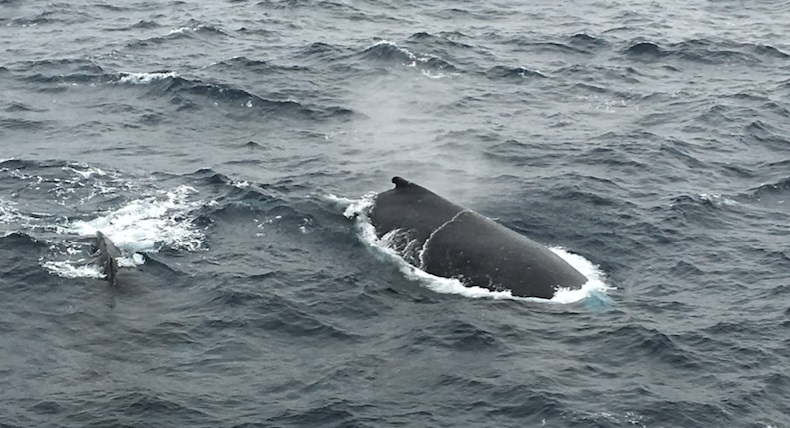 Two humpback whales came bobbing up to the ship during a CTD cast. Image - April Abbott.

Two humpback whales came bobbing up to the ship during a CTD cast. Image – April Abbott.

Highlight 3: Drifters (are doing it for themselves)!

Throughout the voyage we were watching sea surface temperature to identify the location of currents and eddies. To get a better idea of where water goes, we also deployed ‘drifters,’ small buoys that float with the currents and can be tracked by the ship using satellite technology.

Drifters were deployed at various points of interest during the voyage and also during our EAC drift study. During the drift study, the drifters were released near Coffs Harbour and then tracked as they drifted south. Things move pretty fast out there and they traveled about 300 km south in three days. 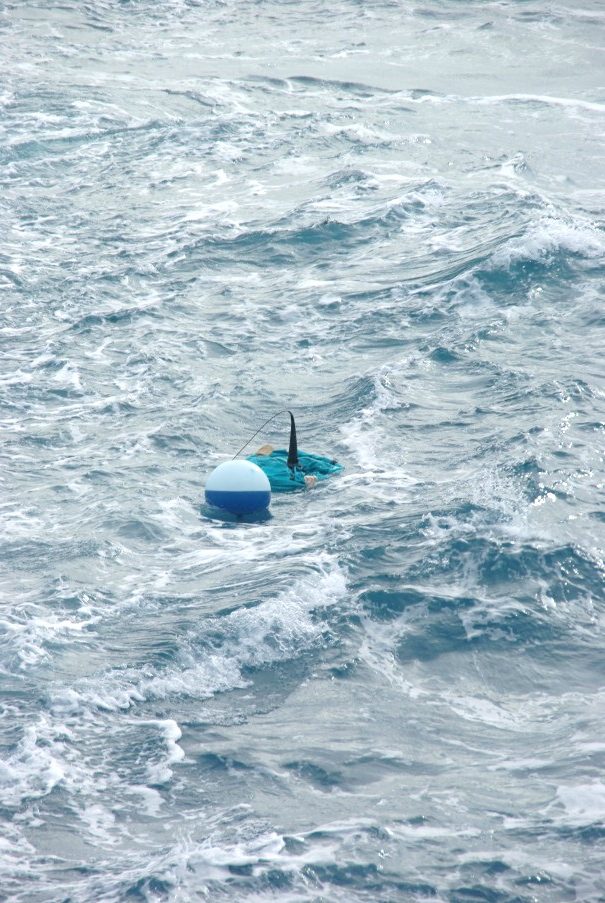 An ocean drifter used to track movement of water in the EAC. Image - Martina Doblin.

An ocean drifter used to track movement of water in the EAC. Image – Iain Suthers.

So small but so important! Who are they? What are they doing? What processes are they participating in? Turnover of microbes in the ocean is estimated to be just six days so they must be very active!

The in situ pumps on Investigator have filtered microbes from over 6000 litres of water during the voyage.  This lets microbiologists find out not just who is present (by looking at the DNA) but also see how and what that community is doing thanks to the large sample size available.

The underway systems on Investigator have allowed further analysis of microbe productivity through fluorescence and nutrient measurements, giving scientists the chance to see how many plankton are present, how the community is doing (e.g. nutrient stress), and who is doing most of the production in a given location. 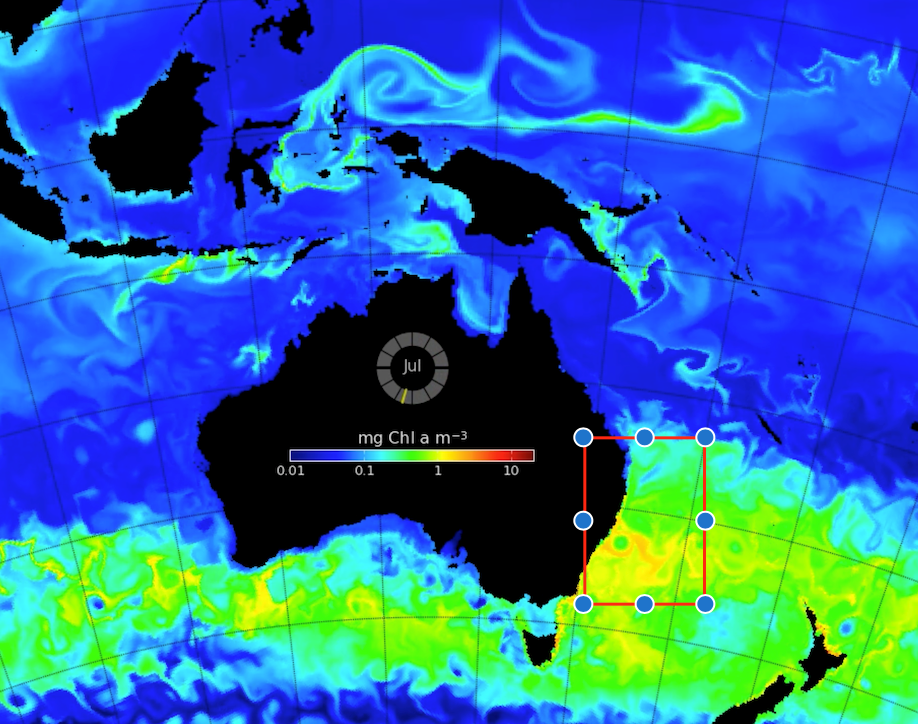 On this voyage, chlorophyll productivity (shown by colour) was directly measured throughout the area in the red box.

After so many exciting discoveries, and no doubt more still to come back in the lab, our time on Investigator has come to an end. As we reluctantly pack down to depart in Brisbane, the next research team is already gearing up to get on board. I hear they will be working on another interesting project in the warmer waters around the Great Barrier Reef to examine the question, “Can coral create rain?”

Find out more about the research on our super science ship here.