Most students remember dissecting a frog in science class at school, but not everyone has witnessed a dolphin being carefully taken apart and examined. WARNING: this story contains images of a dolphin being dissected.

This article originally appeared on ABC News. Read the original article here.
WARNING: this story contains images of a dolphin being dissected

Most kids remember dissecting a frog in science class at school.

But not everyone has witnessed a dolphin being carefully taken apart and examined.

It might seem a bit gory, but the necropsy was performed to better understand, manage and conserve the marine species.

Twenty-two students from the University of Tasmania joined researchers from the CSIRO and the Department of Primary Industries, Parks, Water and Environment (DPIPWE) for the event. 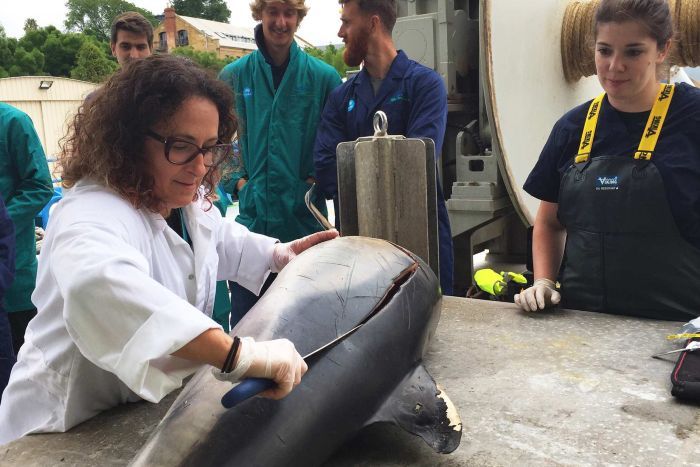 CSIRO’s Dr Karen Evans, who performed the necropsy on board the research vessel the RV Investigator, said “it’s a bit like forensics”.

“I compare it to CSI [crime scene investigation],” she said.

“You want to find out if anything has compromised the animal, if there’s any disease, but also you’re also trying to find out a bit more about the species.”

The subject of the study died after becoming stranded.

“Animals like this live their whole lives in the ocean so we don’t have an opportunity to really study them,” Dr Evans said. 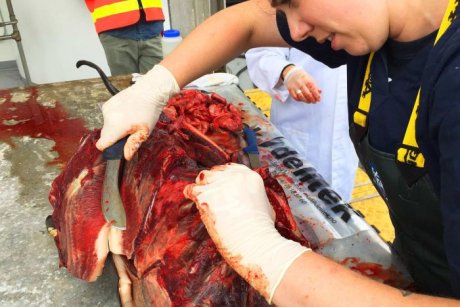 A lot can be learned from study of the flesh, organs and teeth of dead animals. ABC News: Aneeta Bhole

‘Fascinating, except for the smell’

While students agreed the dissection was informative, it was the smell that took them most by surprise. 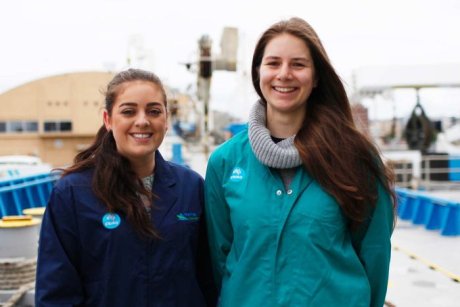 Alice Wanders said she “wasn’t horrified or disgusted” by the experience.

“It was fascinating, except for the smell, we didn’t expect it to smell this bad,” she said.

“This was a fairly fresh specimen so the smell isn’t as bad as an animal that’s been on a beach for a couple of days,” Dr Evans said.

“A really decomposed animal can smell like rancid parmesan cheese … [that is] the best way to describe it.” 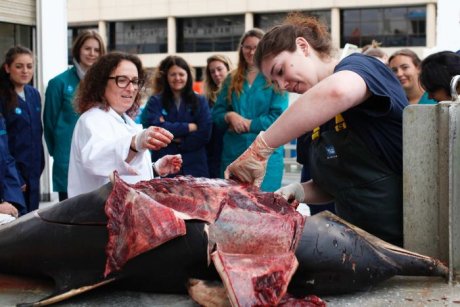 Dr Karen Evans supervising a necropsy on a dolphin

The dolphin was donated by DPIPWE and had been sitting in a freezer for almost a year before the procedure.

“We get a standard set of samples from all whales and dolphins that we investigate,” he said.

“Normally we’re doing this procedure on a beach and we take some skin, some blubber, a range of internal organ samples, we take some teeth and each one of those samples gives us some specific information.”

Mr Carlyon said skin provides genetic information, blubber indicates toxins and potential pollutants that build up in the tissue, while teeth can reveal age of the animal.

“It all helps build a picture of the health of that animal, it’s ecology and what it’s been doing prior to stranding.”

Previous post:
Braithwaite, there’s MORE: celebrating our lifetime achievers
Coming up next:
Quiz ahoy! How deeply do you know our oceans?