Did a hotspot break up your relationship?

Did a hotspot break up your relationship?

We’re back out on the waves on board RV Investigator serving up live science plucked fresh from the high seas – and what a voyage it’s been! 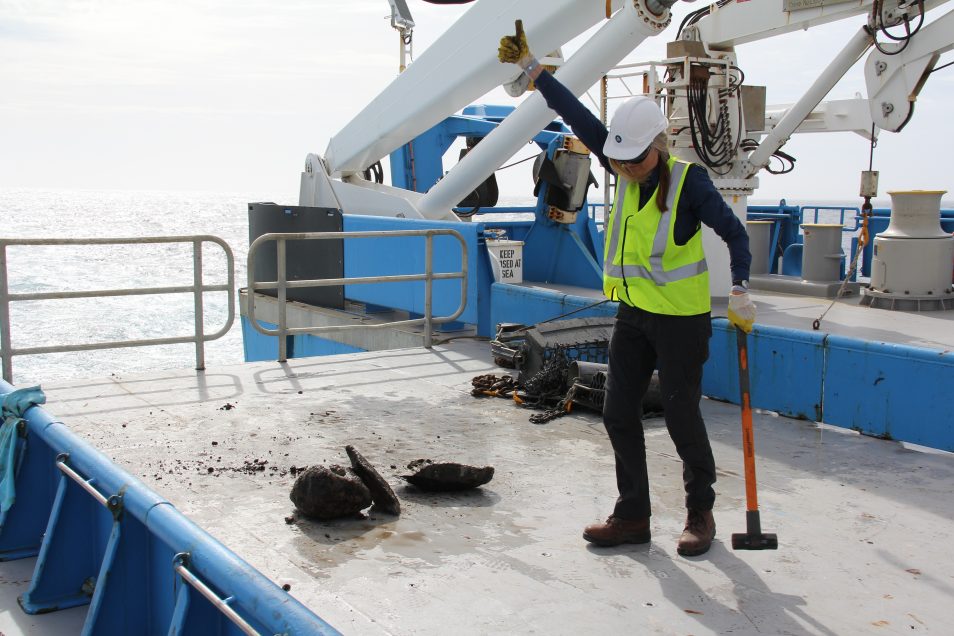 Women make up 85% of scientists on this voyage of RV Investigator, which is being led by the University of Tasmania.

We’re back out on the waves on board RV Investigator serving up live science plucked fresh from the high seas – and what a voyage it’s been! Since departing Hobart just after Christmas, we’ve been busy sailing for science – not in pursuit of freaky abyssal fish, nor whale watching or shipwrecks – this time we’ve set out for the love of rocks.

Yep, you read it correctly. The Chief Scientist, Dr Jo Whittaker from the University of Tasmania is leading a team of geologists on a two-week voyage to undertake research into one of those huge, soul-searching kind of break ups. Think less Ariana and Pete (hello, millennials, are you reading CSIROscope?) and more Australia and Antarctica.

We’re hoping that we might get the closure we need by investigating an area hundreds of kilometres off the coast of Tasmania brimming with seamounts (underwater volcanic mountains).

All of this drama went down like, 35 million years ago, so we should really be over it by now, but according to Jo, it’s vital that we understand what happened in Antarctica’s past in order to predict its future.

Smoke in the water

Seamounts are caused by mantle plumes – basically, the homewreckers of the lithosphere (the Earth’s crust and upper mantle). Mantle plumes are an up-welling of extra-hot molten rock (magma) from the mantle below and they can seriously mess stuff up. They can cause the Earth’s crust to weaken and rise up through the sea floor, creating big structures such as seamounts and large underwater plateaus, like the Kerguelen Plateau in the Southern Ocean.

While a mantle plume more or less stays put over time, tectonic plates can continue to drift over it, resulting in seamounts sprouting up in chains across the seafloor. A mantle plume can also cause the Earth’s surface to be uplifted.

Jo thinks that if we can determine the age and the order in which the seamounts we are studying sprouted as a result of the Balleny mantle plume, we’ll get a better understanding of the role this plume played in this epic break-up.

“Around the same time, it’s thought that the Tasman Gateway, separating Antarctica from Tasmania, opened up.”

“This research is all about determining whether the mantle plume played a role in opening the Gateway.” 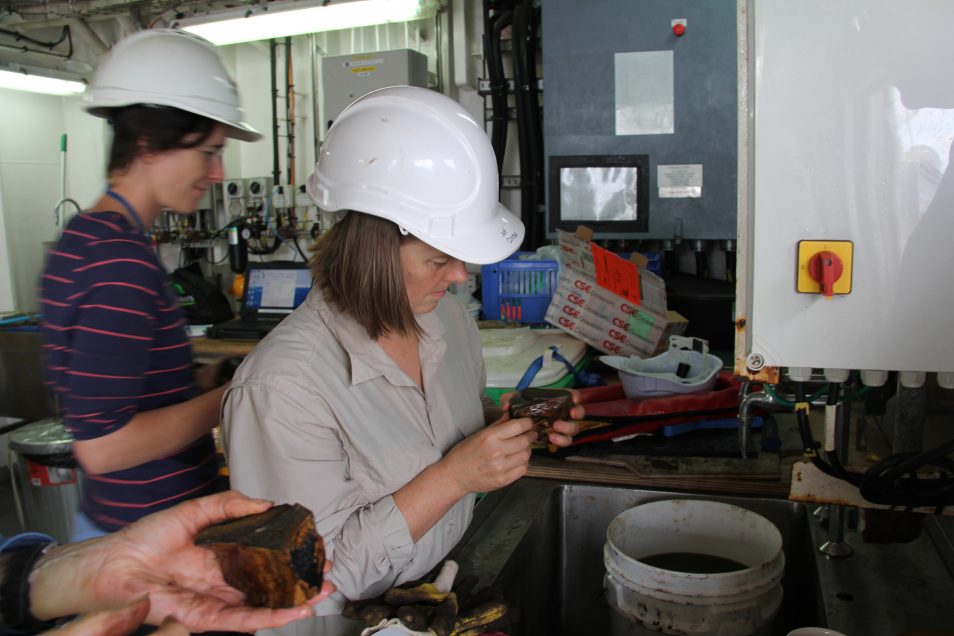 Faced with the prospect of a dry ship on New Years’ Eve and oscillating bouts of sea sickness – compounded by my baseline understanding of geology (which has marginally improved), it’s been a seamount-shaped learning curve catching up on the science above and below decks.

RV Investigator operates 24 hours a day (eye-masks issued on board say “good science doesn’t sleep but good scientists do”) and being on board this world-class research vessel feels like living inside a big, heaving, cooperative sea creature, fuelled by the enthusiasm and smarts of the crew, scientists and support staff on board. 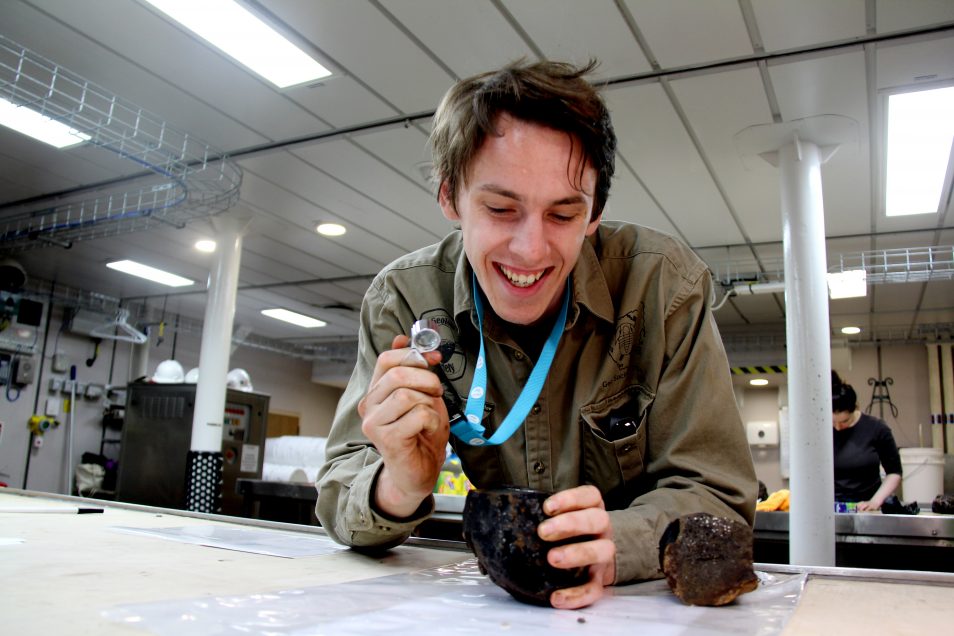 (In case you can’t tell) Tom, PhD student from University of Tasmania is excited to find some fresh basalt, because it will clue us in to the age of one of the seamounts.

Much to one geologist’s delight, we occasionally dig up sediment. Popping this under the microscope can reveal a catalogue of million-year-old microfossils including the remnants of coral and plankton which can be dated.

Everyone is connected on board by some advanced and not so advanced technology. It’s not unusual to wake up to a message from a scientist at 2am posting a photo from another ‘gorgeous dredge’ or to find napkins passionately scribbled with geological diagrams lying around the ship’s galley. 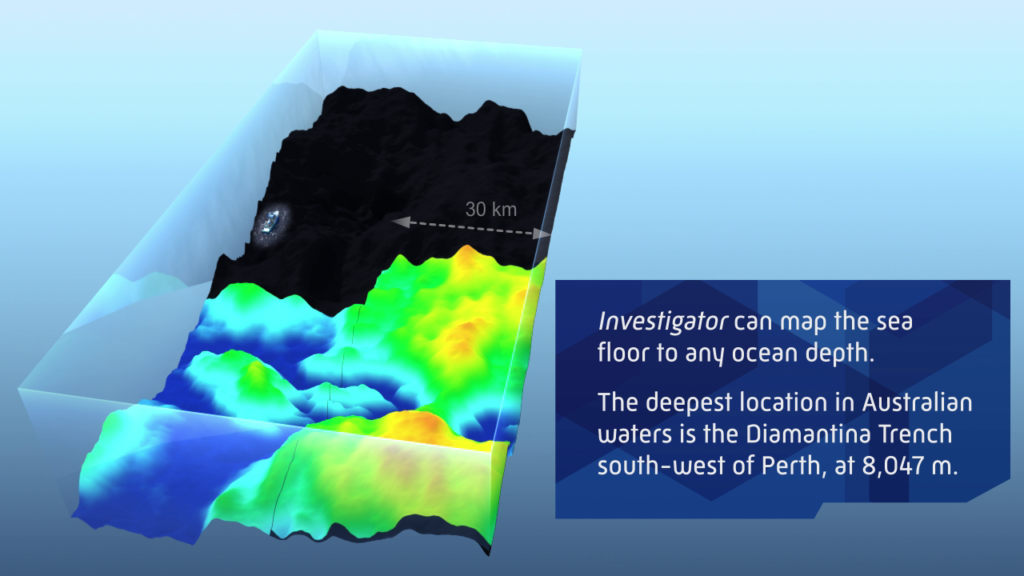 RV Investigator has advanced multibeam systems that can map to full ocean depth.

Navigating the unknown is, of course, made much easier with detailed maps and our geospatial mapping team has been constantly collecting seafloor data in rotating 12-hour shifts. The maps are used to decide which part of the seamount we’d like to sample. The ship’s winch is then used to lower a dredge down to thousands of metres below the ocean surface to sample along the top of the seamount.

Enough about us, though – let’s jump into a quick recap of why we’re here.

Australia and Antarctica – a lava story

When things were good, they were really good

We don’t know how long Tasmania and Antarctica shacked up together before separating around 100 million years ago but their relationship goes back at least 500 million years (New Zealand came along for the ride too #itscomplicated).

But their issues only became bigger and bigger

At some point, maybe around 80 million years ago, tension rose to the surface. The Balleny mantle plume, a hotspot, appeared on the scene and fired up seamount after seamount in progressive chains. After being so close for so long, Antarctica and Tasmania started to drift apart.

They decided their problems were just too big to solve

At first, Tasmania started to back off slowly, at a rate of a few millimetres or so per year.

Then, around 35 million years ago, rapid uplift of the crust saw Tasmania start zipping north at around 7 centimetres per year. It was time for Tasmania to move on, and leave the hotspot and Antarctica behind.

Around 34 million years ago Antarctica became increasingly cold – icy, if you will – and the happy memories of the flora and fauna it once shared with Tasmania became a thing of the past. Perhaps Tasmania still carried a flame as it moved north – after all, its rocks, landforms, soils and vegetation are all by-products from a long-term relationship with Antarctica.

As continental drift accelerated, the sea floor widened enough to form a gateway (opening) for colder waters to start circulating around Antarctica. We call this the Antarctic Circumpolar Current (ACC), which thermally isolates Antarctica and helps keeps it cold.

It’s possible that the uplift of the seafloor could have led to the opening of the Tasman Gateway – and the related onset of the ACC. Determining how and when the seamounts formed in this region will help us better understand the evolution of the ACC. 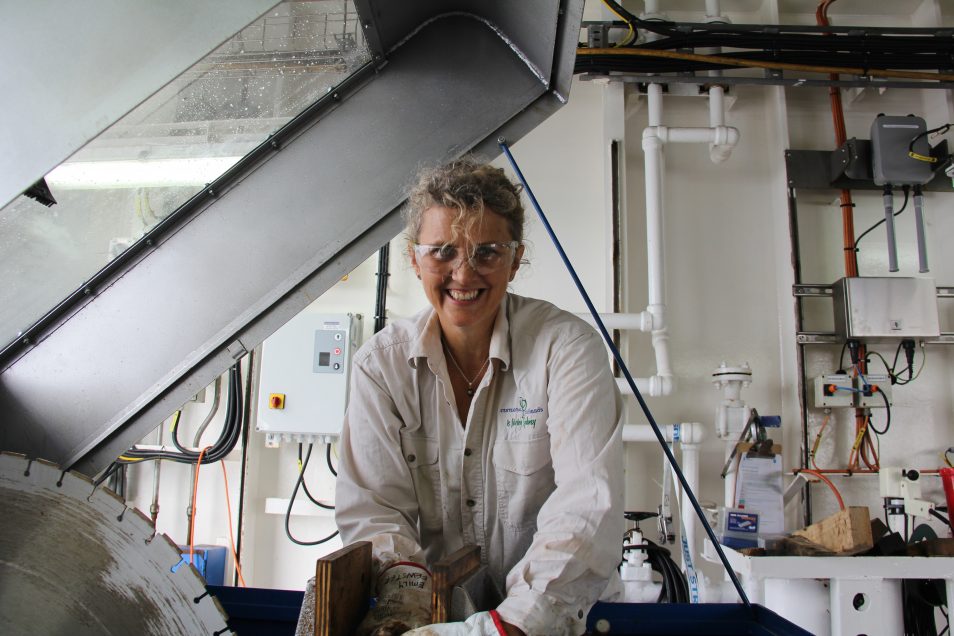 Emily is an Australian teacher on board under our Educator on Board Program. When she’s not assisting scientists with preparing samples, she’s coming up with new geological slants for the school curriculum.

Get your rocks off (the dredge and into the lab)

Even though things have cooled off, we still have some lingering questions to be answered. Did continental drift alone cause the Tasman Gateway to open, leading to Antarctica’s progressively cold state? How drastically did the Balleny mantle plume affect the seafloor over time?

Out here, Jo’s looking for those answers in the rock samples, which she describes as ‘geological time capsules’– they’ll be dated and analysed back at the lab.

“All of the data we’re collecting will be used to train better models used to predict what will happen to Antarctica’s future coastline and the melting of its ice sheets.”

“We’ll understand how the Tasman gateway opened – and whether or not the mantle plume played a major role in the glaciation of Antarctica.” 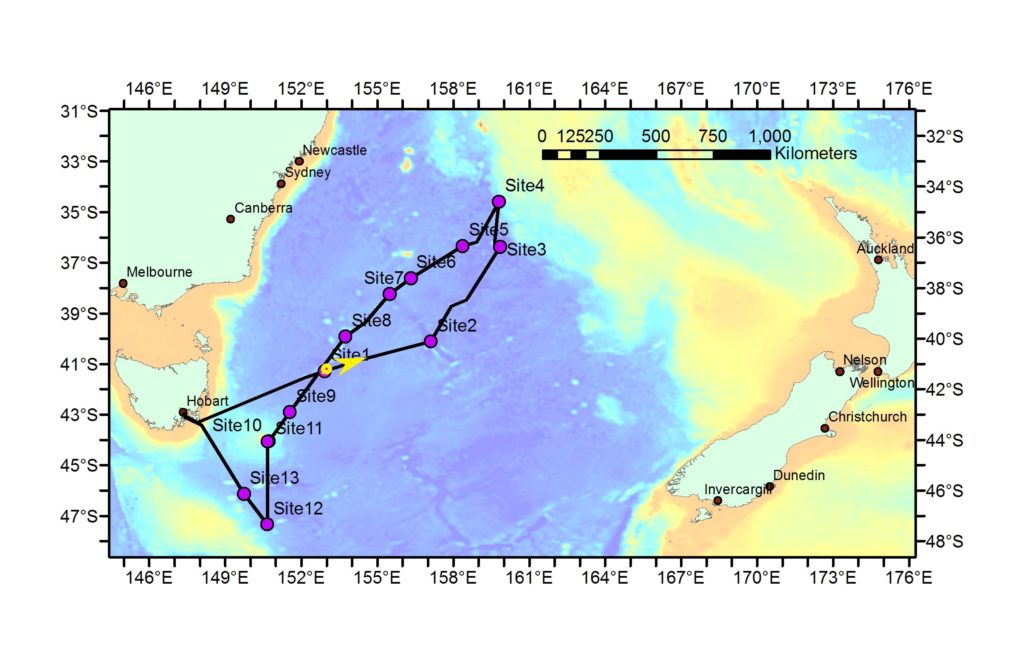 Scientists are seeking to join the dots to better understand this chain of seamounts that stretches across the Tasman Sea.

Work at sea alongside scientists through our Educator on Board Program.

Previous post:
Maintaining a healthy gut during weight loss
Coming up next:
Robots of the future: it’s about to get weird