We’re working with the City of Darwin to improve the air pollution data collected by smart sensors. 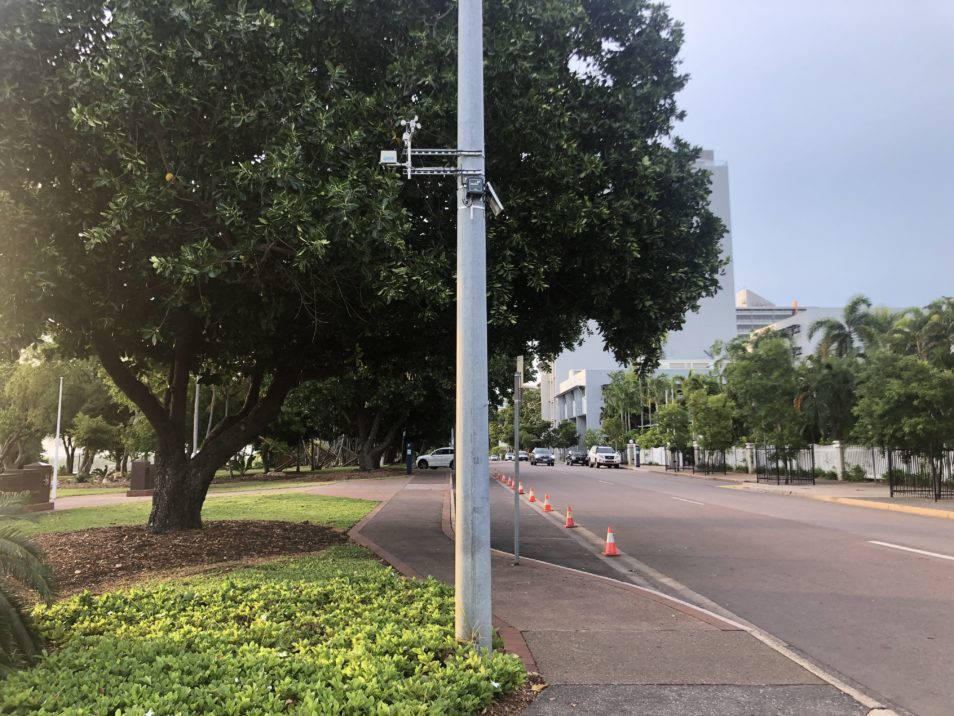 Darwin smart sensors will help residents plan their days. The sensors are small but deliver big value for livability.

For residents in the top end of Australia, the tropical heat that brings on mango madness at this time of year gives way to big rains that quickly turn the landscape to a vibrant green. Likewise, in the middle of the year, residents know the appearance of dragonflies signals the arrival of the cooler dry season bringing smoke from fires that are key to renewing the top end landscape.

Along with crocodiles, stunning sunsets, beachside markets, and warm nights at the open-air cinema, living with the sticky tropical heat of the wet season and the sometimes smoky days in the dry is a part of life in Darwin.

Dr Erin Dunne grew up in Darwin. She’s now an atmospheric scientist and has just begun a project with the City of Darwin. She’s using their network of smart sensors to provide more localised information on the heat, humidity and smoke pollution around Darwin. This will empower people to manage their exposure to heat and air pollution and look after their health.

“There’s a lot of work on the health cost of extreme heat and smoke pollution. Indigenous people, asthmatics, and outdoor workers can be particularly vulnerable. Darwin’s air quality is pretty good for most air pollutants. We don’t have the heavy traffic or industry that other cities have. But, the air quality is trending to worse for PM 2.5 fine particles from smoke pollution,” Erin said.

Many southern Australians learned about the effects of PM2.5 from smoke during the Black Summer bushfires.

But Erin explains that it’s not just a health issue, it’s also about liveability.

“You think of Darwin as this beautiful, lush tropical city. And the dry season is the perfect time to be outdoors, because it’s cooler. But it’s not as pleasant when the sky is shrouded in smoke. And when your washing and outdoor furniture is covered in smoke and ash,” she said.

“But we need fires – they’re part of the ecosystem and have a special place in Indigenous culture in caring for country. Smoke and heat are a normal part of being in Darwin, we have just learned to live with it.”

So how do we know when smoke levels may be risky? And when we should maybe stay inside? With this information, we’d be able to plan our days around the smoke.

The City of Darwin is working to deploy the last of 24 sensor systems in the CBD and Darwin suburbs. But it’s not just temperature and smoke pollution, the sensors also collect information on noise, rain, and humidity,

Erin is comparing the data from this sensor network, with the quality-assured data from the Northern Territory Environment Protection Authority (NT EPA) and Bureau of Meteorology (BoM) reference sites in Darwin. She’s checking for any differences and making sure there are proper data protocols in place. This will allow the City of Darwin to give reliable, and local, live reporting on the microclimate and smoke pollution, now, and into the future.

“Erin is helping us calibrate our data with the BoM and NT EPA weather stations in Darwin,” said Krishan Maheson, Digital Innovation Manager at the City of Darwin.

“She’s providing advice on where to relocate some of the sensors, to help us measure the temperature of infrastructure and beautification projects over time. Sensors can play a role in making informed decisions on the location of new shade structures and outdoor dining spaces. It’s a big agenda, and we want to make informed decisions.” 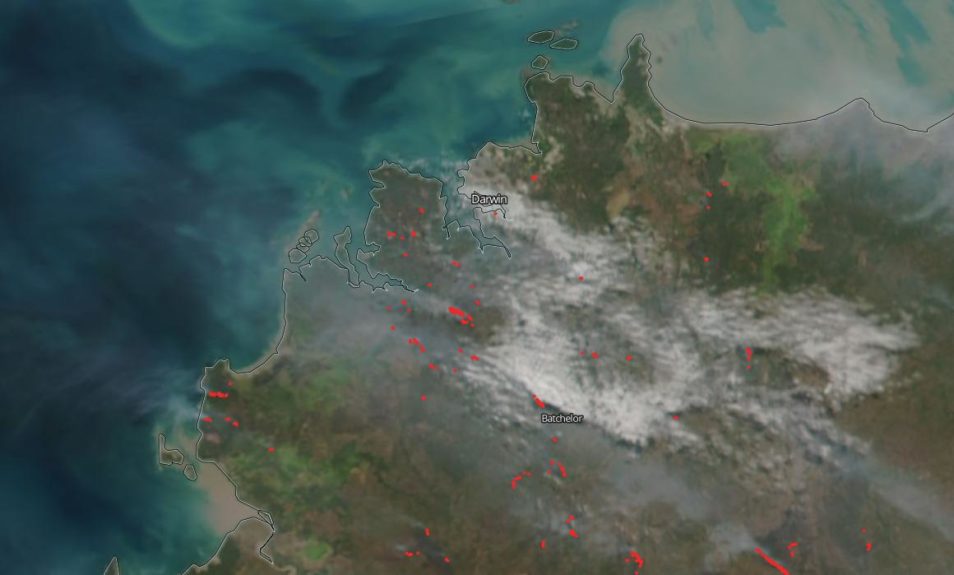 Fires burning over Darwin as seen from satellite. We acknowledge the use of imagery from the NASA Worldview application (https://worldview.earthdata.nasa.gov), part of the NASA Earth Observing System Data and Information System (EOSDIS).

Local environmental information at your fingertips

From November 24, Darwin residents will have access to real-time data from the sensor network that Erin is helping to improve. It’s called The City Intelligence Dashboard.

“It’s a dynamic dashboard that will show temperature, humidity, pollution particles and even parking information and Wi-Fi hotspots across Darwin. And you’ll be able to click on the sensor closest to you for hyper-local data,” Krishan said.

Darwinites can already access heat and air quality data from the NT EPA sites via the smartphone app AirRater. The vision is to provide even more localised data by incorporating the City of Darwin’s sensor data streams into the AirRater app.

“Let’s say you have a pre-existing health condition, and it’s going to be a really smoky, hot day. You may be putting yourself at risk if you have an active day outdoors. Having this data will enable you to take action to mitigate and manage your exposure to heat and pollution,” Erin said.

Global advances in sensors and communication technology mean it’s now possible to collect and communicate data for specific locations, in real-time. Because of these benefits, there’s been an explosion in smart sensors around the world.

“Smart cities often have a big network of low-cost sensors. But we need data protocols to make sure they’re producing quality information. It’s happening in a lot of cities around the world – but how well is the key. Singapore is fairly developed, as they’re an innovative asian mega city so they understand smart approaches to managing tropical heat and air quality,” she said.

We recently released an updated report showing that Darwin is continuing to get hotter and the number of days exceeding 35°C each year has increased. The information that Darwin smart sensors are recording will improve decisions on how we can build a cooler Darwin. The sensors can be used to assess whether new heat mitigation and greening projects (like street trees) are keeping things cooler in Darwin.

Does that sound familiar? Erin’s project is part of the Darwin Living Lab. The Lab is a 10-year partnership between us, the Australian and Territory Governments and City of Darwin.

We’re bringing people together to support Darwin to become cooler, more energy and water-efficient. And to be better able to cope with future climate challenges. The lab will test heat mitigation measures and inform tropical urban design for Darwin by using real-world experiments.

In the future, Erin will work with University of Tasmania and Australian Catholic University researchers to look at how outdoor workers can use AirRater to support decisions about working under heat stress.

“It’s all about quality data helping to steer a better quality of life,” Erin said.

On November 26, the Darwin Living Lab webinar will explore opportunities for the ethical use of urban sensor network data. Including how this can help to create cool and liveable tropical cities. The webinar is relevant for planners, consultants, students, researchers and anyone with an interest in smart cities and big data.

Join our free webinar on sensor networks and smart cities

Previous post:
This super rare squid is a deep-sea mystery. We recently spotted not 1, but 5, in the Great Australian Bight
Coming up next:
Meet our researcher: Dr Marzi Barghamadi