Our Chief Executive, Dr Larry Marshall, announces the winners of our 35th CSIRO Awards. Find out who they are. 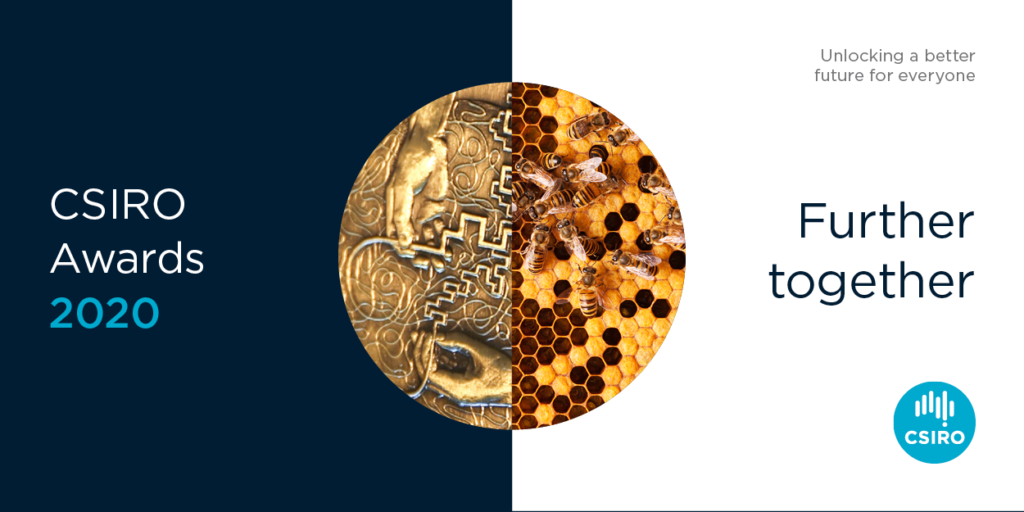 Our 2020 CSIRO Award winners have been announced!

This year has tested all of us, both professionally and personally. But now, as we celebrate the 35th CSIRO Awards, I am filled with pride at the achievements of Team CSIRO.

The CSIRO Awards celebrate the outstanding achievements of our people and partners who are unlocking a better future for everyone. It’s our ultimate rewards and recognition program.

Congratulations to all of our 2020 CSIRO Award winners!

CSIRO Medal for Diversity and Inclusion

Awarded to the domestic family violence and abuse working group.

The working group developed a comprehensive and impactful workplace response to support our people impacted by domestic family violence and abuse.

The NAWRA is the world’s most extensive, multi-disciplinary water resource study, involving a team of more than 180 people. NAWRA has created value for various customers, with the research outputs actively used by governments, industry, communities, individual land holders, and developers to inform resource planning, management and investment decisions.

The COVID-19 vaccine development team rapidly pivoted and actively engaged in the global pursuit of vaccines for the COVID-19 pandemic.

Proactive and focused support from the Flattening the Response Curve team helped our research teams’ partner with industry, government and the innovation ecosystem to deliver COVID‐19 response and recovery solutions to the communities we serve.

Simon led the development of our Artificial Intelligence and Machine Learning Future Science Platform. He brought people together from multiple teams across the organisation, as well as numerous external partners, to drive a vision that is truly cross-cutting, domain-spanning, and transformational in these spaces.

Sarah played a leading role in our involvement in the international Square Kilometre Array project to build the world’s largest radio telescope, and was Australia’s science negotiator for the SKA international treaty. Earlier this year she was named NSW Telstra Business Woman of the Year, and just this month awarded Space Executive of the Year and made a Fellow of the Australian Academy of Technology and Engineering.

CSIRO HSE Medal for Area Custodian of the Year

The ANIC ethanol collection relocation team created an innovative solution to store its ethanol collection. The collection was relocated to new facilities, which ensured alignment with Australian Standards and best practice dangerous goods handling and storage, and prioritised our people’s safety.

Our Alerts Notification Service Project team established an emergency alert notification service for the organisation in record time. This system will ensure our people are safe when the unexpected occurs.

Our partnership venture v2food developed and commercialised innovative plant-based meat alternative products. The design and development of the ‘meat-like’ ingredients and their translation from laboratory to industrial-scale occurred in just over a year.

Max has supported industry development through the delivery of several important scientific papers. He uses his deep technical comprehension and analysis to translate important information into key commercial insights.

Louise’s dedication to science support is outstanding. Working in our finance and project support areas, she has always been great promoter of our science to our people and stakeholders alike.

Kathy’s sustained research excellence has advanced the knowledge of how climate change affects sea-level rise, storm surges and severe weather, and enabled communities to understand and adapt to climate change.

The work of the ACDP COVID-19 team enabled the rapid progression of the two leading vaccine candidates through clinical trials. Bringing the world a step closer to a safe and effective COVID-19 vaccine.

This year, we’ve been more apart than ever but we’ve worked better together than ever.

The road ahead for Australia’s recovery and future resilience calls on us to collaborate widely and generously to boldly take on challenges that are bigger than ourselves. It won’t be an easy road. But together, with our partners, there is no limit to how far we can go.

Previous post:
We’ve mapped a million previously undiscovered galaxies beyond the Milky Way. Take the virtual tour here.
Coming up next:
From Hobart, to London, to Dhaka: using cameras and AI to build an automatic litter detection system