Imagine discovering a new species during your summer holidays. That’s what happened to Deb Osterhage when she spent two months as a vacation scholar at the Australian National Fish Collection at CSIRO.

With the very appropriate name Pegasus tetrabelos, this newly discovered slender seamoth uses modified fins to walk on the seafloor. 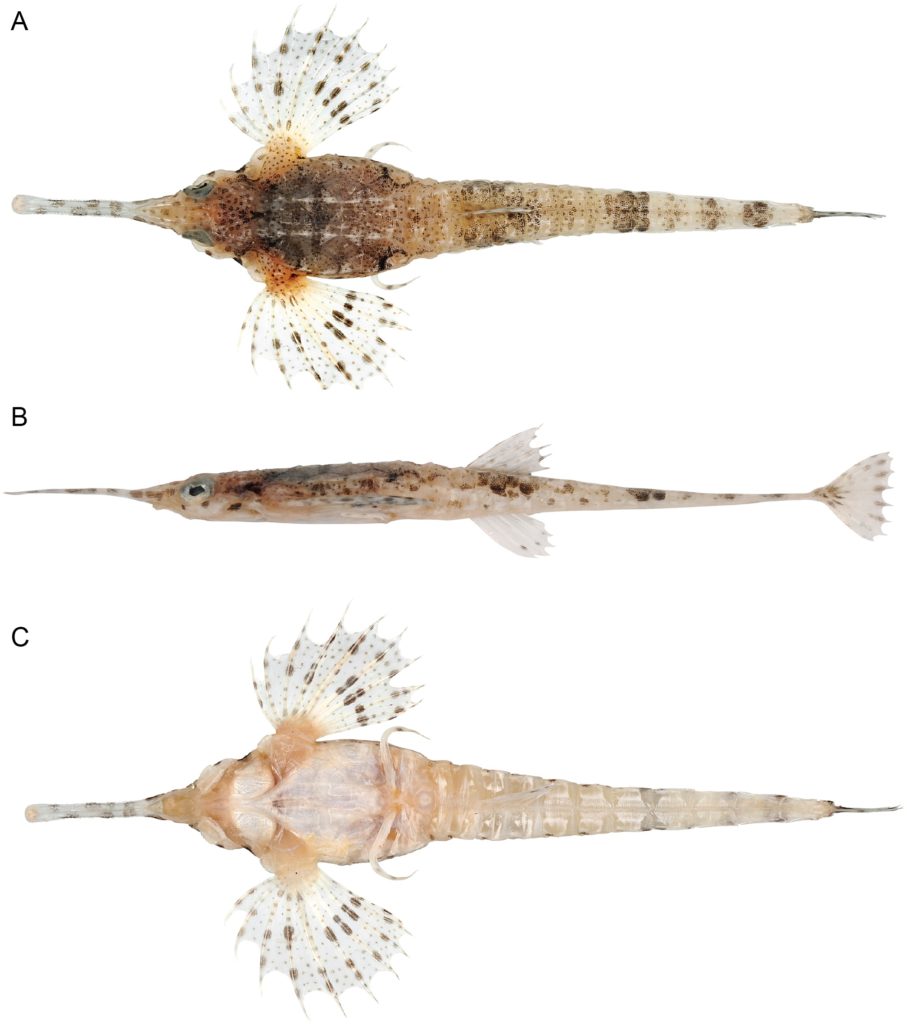 Dorsal (A), lateral (B), and ventral (C) views of the new species Pegasus tetrabelos. On its underside you can see the modified fins that it uses to ‘walk’ on the sea floor.

Think you know your fishes? Think again. Common species can actually be hiding cryptic species within their ranks. Look closer and one species becomes two, or even three.

“There are a lot more species of fishes in Australia’s waters than the 5000 we think we know about. A new species is described every two or three weeks and that’s been going on for the past decade,” says Deb Osterhage, a marine ecologist at CSIRO.

Deb studied Queensland’s slender seamoth Pegasus volitans at CSIRO’s Australian National Fish Collection in Hobart as part of a two-month vacation scholarship during the summer of 2014-15. Her project involved taking a closer look at specimens of this little fish after DNA barcodes had suggested they might actually belong to two different species.

“We pulled specimens out of the freezers at the fish collection to look at their morphology and found we could separate them into two groups based on their tail spines,” Deb says. “We did more genetics and found that our groupings were right. There really are two different species that differ in subtle ways.

“Previously if someone had looked at these fishes side by side they may have assumed any differences they noticed were insignificant, perhaps that one was male and the other female.

“This kind of work can be really important for conservation. We could lose a rare species if we don’t realise it exists alongside its more common cousins. Luckily, this new seamoth appears to be reasonably common in waters off Queensland and the Northern Territory. Our findings will help inform its management.” 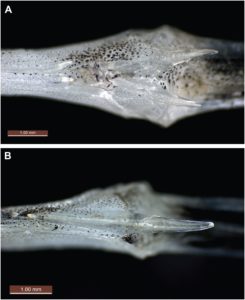 Viewed from the side, the new species P. tetrabelos (top) has two spines on each side of its tail and P. volitans (bottom) has one.

The newly recognised species will soon make its way into guidebooks. Anyone who spots a Pegasus in Northern Australia will be able to tell the difference between the original species, P. volitans, and the new species, P. tetrabelos, just by looking at their tail spines: are there two or four?

Deb and her colleagues John Pogonoski, Sharon Appleyard and William White at our fish collection used 135 specimens to describe the new species. Most were collected by scientific trawling in the Torres Strait and Great Barrier Reef between 2003 and 2005. One-hundred-and-four specimens are held at CSIRO’s Australian National Fish Collection in Hobart and the rest by museums in Australia and overseas.

What about the holotype? A holotype is a single specimen that represents its species. For every species that’s ever been given a scientific name (including our own), somewhere in the world a natural history collection holds that species’ holotype. When a species is split into two, the new species needs a name and a holotype.

“The holotype of P. volitans is held by Naturhistoriska Riksmuseet in Sweden,” says Deb. “It’s over 200 years old and was named by Linnaeus himself, the founder of modern taxonomy. It’s so fragile that they couldn’t lend it to us, so they sent photos and x-rays for us to study.”

The photos showed the holotype was a two-spined variety.

“We chose one of our specimens at the fish collection in Hobart to be the holotype and named the new species P. tetrabelos,” says Deb. “The Greek word tetra means four and belos means dart or arrow, referring to the tail spines.”

This work has been published as Integrated Taxonomy Reveals Hidden Diversity in Northern Australian Fishes: A New Species of Seamoth (Genus Pegasus).

Previous post:
AI has beaten us at Go. So what next for humanity?
Coming up next:
Supercomputers, pelvic prolapses, Dell and the matrix