What came first - the chicken with the switched off allergen gene, or the allergy-free egg? Our scientists have been working with Deakin University to develop an egg that doesn't cause allergic reactions, and it's all about changing the chicken. 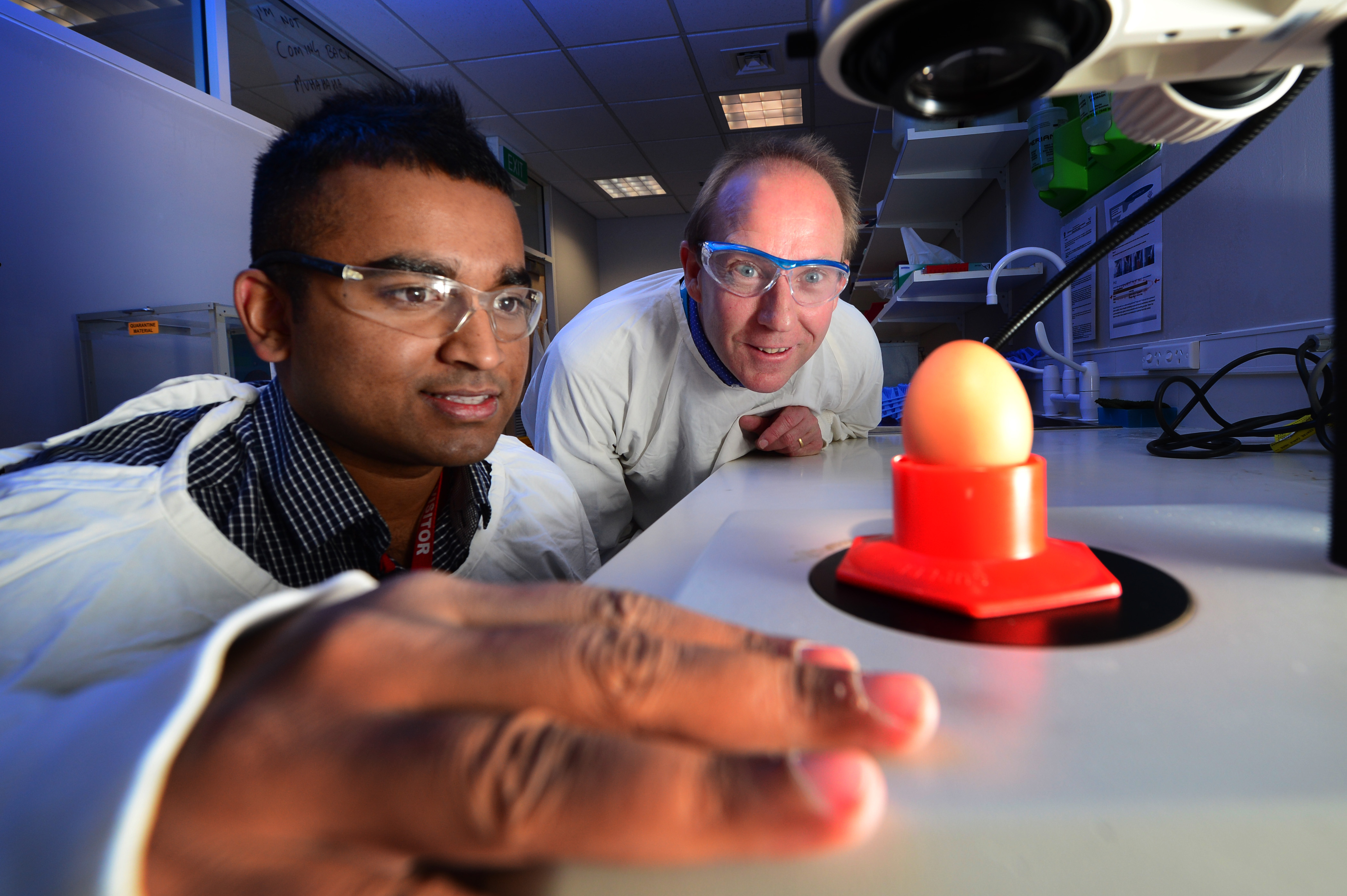 Dr Tim Doran from the CSIRO and Deakin Universityâ€™s Associate Professor Cenk Suphioglu have made a breakthrough in their bid to create allergy free eggs. credit Mitch Bear/Herald Sun

Pathum Dhanapala (Deakin) and Tim Doran (CSIRO) have made a breakthrough in their bid to create allergy-free eggs. Image: Mitch Bear

This article was written by Lucie Van den Berg and first appeared in the Herald Sun.

What came first – the chicken with the switched off allergen gene, or the allergy-free egg? Our scientists have been working with Deakin University to develop an egg that doesn’t cause allergic reactions, and it’s all about changing the chicken.

In a world first, the team has also created synthetic versions of all four egg white proteins in the lab.

Our own Dr Tim Doran, and Deakin University’s Associate Professor Cenk Suphioglu, said it was one of the first critical steps towards developing allergy-free eggs to make life easier for people with allergies and improve the safety of medications made with eggs, such as flu vaccines.

There are 40 proteins in egg white, but four major ­allergens that cause the ­majority of reactions.

Almost 9 per cent of Victorian infants have an egg ­allergy at 12 months of age, which can lead to dermatitis, asthma, vomiting or gut irritation.

Dr Doran, who has a daughter with such an allergy, said they were used in such a wide range of foods and products, including cosmetics and medication.

Associate Professor Suphioglu said they created all four versions of egg white proteins in the lab and switched off the allergenic ­response in one protein, which is responsible for the majority of allergies.

“We have developed the synthetic versions of the allergens, which are more pure and standardised than the natural extract, which would be useful for both skin-prick testing and immunotherapy,” he said.

Immunotherapy aims to give people tiny amounts of the allergen in a controlled medical setting to induce ­desensitisation or tolerance.

The advantage of switching off the allergenic part of the egg white protein would be that the patient would be less likely to have a dangerous allergic reaction during treatment.

Together with PhD candidate Pathum Dhanapala, the scientist’s ultimate aim is to modify the proteins in egg whites to produce chickens that lay allergy-free eggs.

Professor Mimi Tang, from the Murdoch Childrens Research Institute and Royal Children’s Hospital, said the synthetic protein could one day be useful in immunotherapy trials for allergies, but it was very early to be talking about clinical applications of the research.

“I think the major barriers to overcome with this product for it to be useful is to determine if it can be used to modulate immune responses and induce desensitisation or tolerance,” Prof Tang said.

The research is published in the journal Molecular ­Immunology.

Previous post:
Another kind of Southern Lights
Coming up next:
This scanner has a few bugs