Australia is on track for up to 1.7C of warming this century IF the world curbs its greenhouse emissions. Working with BOM, we've released the most comprehensive climate change projections to date. 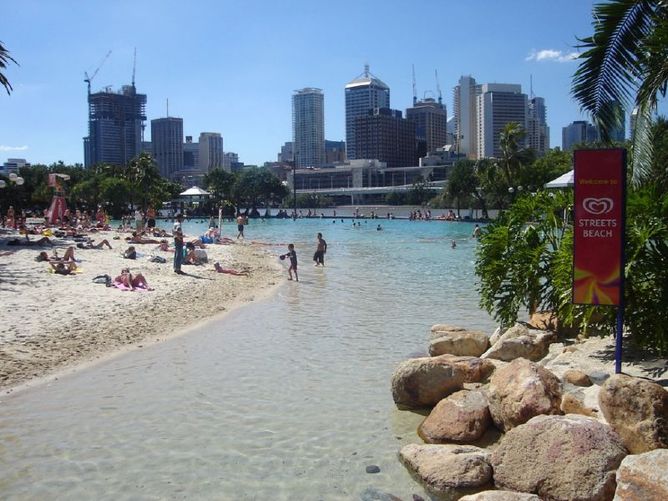 Australia is on track for up to 1.7C of warming this century if the world curbs its greenhouse emissions, but under a worst-case scenario could see anything from 2.8C to 5.1C of warming by 2090, according to new climate change projections released by the CSIRO and the Bureau of Meteorology.

The projections are the most comprehensive ever released for Australia. They are similar to those published in 2007, but based on stronger evidence, with more regional detail. These projections have been undertaken primarily to inform the natural resources management sector, although the information will be useful for planning and managing the impacts of climate change in other sectors.

Over the past 10 years, carbon dioxide emissions have been tracking the highest IPCC emission scenario (known as RCP8.5). If there is limited international action to reduce emissions, then projections based on the highest scenario may be realised.

However, if emissions are significantly reduced over the coming decades, then intermediate emissions (RCP4.5) might be feasible. Following the low emissions scenario (RCP2.6) would be very challenging given the current trajectory of carbon dioxide emissions.

How does Australia compare?

The warming under the high scenario is similar to the global average warming of 2.6 to 4.8C under the high emission scenario reported by the IPCC AR5. However, inland areas of Australia will warm faster than coastal areas.

For example, the Rangelands of inland Australia warm by 2.9-5.3C by 2090 under high emissions, while the East Coast, including Sydney and Brisbane, warms by 2.7-4.7C. 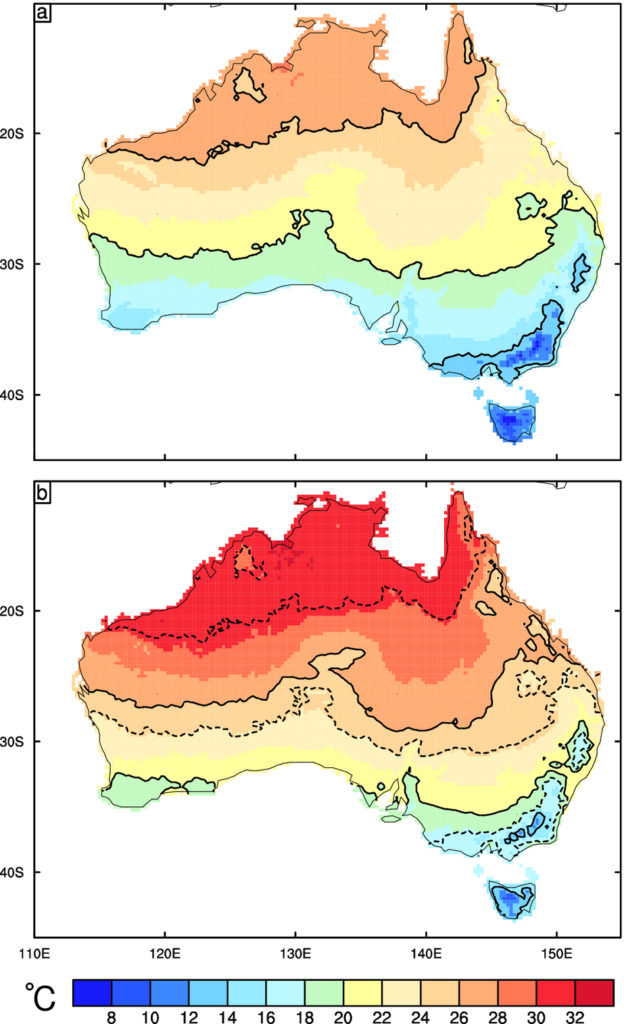 This map shows the annual mean temperature for present climate (A), and late 21st century (B). In each panel the 14C, 20C, and 26C contours are shown with solid black lines. In (B) the same contours from the original climate are plotted as dotted lines to provide the clearest depiction of the shifts in climate.

The new projections should be viewed in the context of what has already been observed. Australia has become 0.9C warmer since 1910. Rainfall has increased in northern Australia since the 1970s and decreased in south-east and south-west Australia.

More of Australia’s rain has come from heavy falls and there has been more extreme fire weather in southern and eastern Australia since the 1970s. Sea levels have risen by approximately 20 cm since 1900.

In future, Australia’s average temperature will increase and we will experience more heat extremes and fewer cold extremes. Winter and spring rainfall in southern Australia is projected to decline while changes in other regions are uncertain.

Historical climate data can be used as an analogue for the future. The analogue could be a location that currently has a climate similar to that expected in another region in the future.

Extreme rainfall events that lead to flooding are likely to become more intense. The number of tropical cyclones is projected to decrease but they may be more intense and possibly reach further south. Southern and eastern Australia is projected to experience harsher fire weather. The time in drought will increase over southern Australia, with a greater frequency of severe droughts.

A projected increase in evaporation rates will contribute to a reduction in soil moisture across Australia. There will be a decrease in snowfall, an increase in snowmelt, and therefore reduced snow cover.

Sea levels will continue to rise throughout the 21st century and beyond. Oceans around Australia will warm and become more acidic.

Freshwater resources are projected to decline in far south-west and far south-east mainland Australia. Rising sea levels and increasing heavy rainfall are projected to increase erosion and inundation, with consequent damage to many low-lying ecosystems, infrastructure and housing.

Increasing heat waves will increase risks to human health. Rainfall changes and rising temperatures will shift agricultural production zones. Many native species will suffer from reduced habitats and some may face local or even global extinction.

While reductions in global greenhouse gas emissions would increase the chance of slowing climate change, adaptation is also required because some warming and associated climate changes are unavoidable.

Previous post:
Meet the next generation of Aussie scientists and engineers
Coming up next:
How we’re using science to turn wastewater into wine