Australia's wheat harvest has stalled over the past 26 years, and worsening weather is to blame.

Fields of gold: Australiaâ€™s wheat industry contributes more than A$5 billion to the economy each year. Wheat image from www.shutterstock.com

Fields of gold: Australia’s wheat industry contributes more than A$5 billion to the economy each year. Wheat image from www.shutterstock.com

Australia’s wheat yields more than trebled during the first 90 years of the 20th century but have stalled since 1990. In research published today in Global Change Biology, we show that rising temperatures and reduced rainfall, in line with global climate change, are responsible for the shortfall.

This is a major concern for wheat farmers, the Australian economy and global food security as the climate continues to change. The wheat industry is typically worth more than A$5 billion per year – Australia’s most valuable crop. Globally, food production needs to increase by at least 60% by 2050, and Australia is one of the world’s biggest wheat exporters.

There is some good news, though. So far, despite poorer conditions for growing wheat, farmers have managed to improve farming practices and at least stabilise yields. The question is how long they can continue to do so.

Potential yields are the limit on what a wheat field can produce. This is determined by weather, soil type, the genetic potential of the best adapted wheat varieties and sustainable best practice. Farmers’ actual yields are further restricted by economic considerations, attitude to risk, knowledge and other socio-economic factors.

While yield potential has declined overall, the trend has not been evenly distributed. While some areas have not suffered any decline, others have declined by up to 100kg per hectare each year. 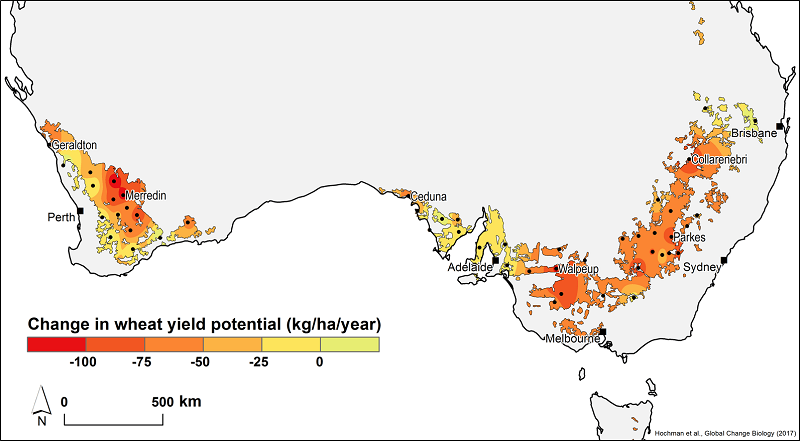 The distribution of the annual change in wheat yield potential from 1990 to 2015. Each dot represents one of the 50 weather stations used in the study. David Gobbett, Zvi Hochman and Heidi Horan, Author provided

The distribution of the annual change in wheat yield potential from 1990 to 2015. Each dot represents one of the 50 weather stations used in the study. David Gobbett, Zvi Hochman and Heidi Horan, Author provided

Analysis of the weather data revealed that, on average, the amount of rain falling on growing crops declined by 2.8mm per season, or 28% over 26 years, while maximum daily temperatures increased by an average of 1.05℃.

To calculate the impact of these climate trends on potential wheat yields we applied a crop simulation model, APSIM, which has been thoroughly validated against field experiments in Australia, to the 50 weather stations.

There is strong evidence globally that increasing greenhouse gases are causing rises in temperature.

Statistically, the chance of observing the decline in yield potential over 50 weather stations and 26 years through random variability is less than one in 100 billion.

We can also separate the individual impacts of rainfall decline, temperature rise and more CO₂ in the atmosphere (all else being equal, rising atmospheric CO₂ means more plant growth).

So the rising CO₂ levels provided a small benefit compared to the combined impact of rainfall and temperature trends.

Why then have actual yields remained steady when yield potential has declined by 27%? Here it is important to understand the concept of yield gaps, the difference between potential yields and farmers’ actual yields.

An earlier study showed that between 1996 and 2010 Australia’s wheat growers achieved 49% of their yield potential – so there was a 51% “yield gap” between what the fields could potentially produce and what farmers actually harvested.

Averaged out over a number of seasons, Australia’s most productive farmers achieve about 80% of their yield potential. Globally, this is considered to be the ceiling for many crops.

Wheat farmers are closing the yield gap. From harvesting 38% of potential yields in 1990 this increased to 55% by 2015. This is why, despite the decrease in yield potential, actual yields have been stable.

Impressively, wheat growers have adopted advances in technology and adapted them to their needs. They have adopted improved varieties as well as improved practices, including reduced cultivation (or “tillage”) of their land, controlled traffic to reduce soil compaction, integrated weed management and seasonally targeted fertiliser use. This has enabled them to keep pace with an increasingly challenging climate.

What about the future?

Let’s assume that the climate trend observed over the past 26 years continues at the same rate during the next 26 years, and that farmers continue to close the yield gap so that all farmers reach 80% of yield potential.

If this happens, we calculate that the national wheat yield will fall from the recent average of 1.74 tonnes per hectare to 1.55 tonnes per hectare in 2041. Such a future would be challenging for wheat producers, especially in more marginal areas with higher rates of decline in yield potential.

While total wheat production and therefore exports under this scenario will decrease, Australia can continue to contribute to future global food security through its agricultural research and development.