Celebrating our heroes of science

Celebrating our heroes of science 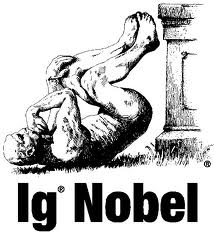 Rodin's 'The Thinker' lying on its side

The Stinker. Official mascot of the IgNobel Prizes

The winners of the 2014 IgNobel prizes have just been announced, and there’s an Australian among them. Peter K. Jonason from the University of Western Sydney shared the IgNobel for Psychology with Amy Jones and Minna Lyons, for providing evidence that people who habitually stay up late are, on average, more self-admiring, more manipulative, and more psychopathic than people who habitually arise early in the morning.

We are filled with admiration.

CSIRO wasn’t among the winners this year, but we’re going to take the opportunity to boast about our earlier winners.

In 2011, David Rentz (formerly of CSIRO) and Darryl Gwynne shared the IgNobel Prize for biology, for their groundbreaking discovery that a certain kind of Australian beetle attempts to mate with stubby bottles. Specifically, that male Buprestid beetles (jewel beetles or metallic wood-boring beetles) had a particular attraction to brown stubbies – none of this fancy craft beer in clear glass for them. In true scientific spirit, having noticed this occurring, they took steps to confirm the mating hypothesis. They ruled out the beetles being attracted by beer residue – the stubby bottles were completely dry. Nor were the beetles interested in a discarded wine bottle nearby – suggesting the colour of the bottle was the source of the attraction.

They then placed several more stubby bottles within range of the male beetles, and found that these too were extremely appealing to the beetles. So appealing, in fact, that they didn’t give up of their own accord, but had to be physically dislodged from making their amorous advances.

This, of course, provides a valuable lesson about the unintended consequences of littering. Throwing away a stubby can cause grave disappointment for beetles.

But these are not our only IgNobelists.

In 2006, Nic Svenson and Piers Barnes took out the IgNobel in mathematics for working out the solution to a problem that has confounded photographers for many years: how many photos do you need to take to be sure no-one is blinking.

This doesn’t work as well when the groups get larger: the number of photos grows so large that the group is likely to lose patience. But as they point out, the more people in a photo, the less it matters if one of them is blinking. And you’ll be pleased to know this was all experimentally tested in the canteen at lunchtime.

So congratulations to this year’s winners, commiserations to the losers, and onwards and upwards for the spirit of inquiry that drives improbable research.

Next year, next year …